Not too much competition for the number one spot; but what other pitches defined the Mets 2012 season?

Share All sharing options for: The Top Five Mets Pitches of 2012

A couple weeks ago we looked at the five longest Mets home runs in 2012. Today, we'll look at the other side of the coin and review the five pitches that most affected the Mets 2012 campaign.

There are two key differences to this exercise that should be pointed out before we start. For one, obviously this won't be a measure of distance -- like the home runs -- as each pitch travels the same span. The next logical choice might be sheer velocity, except that just turns into an unsurprising list of Bobby Parnell's top five fastballs. For that reason, we'll be evaluating each pitch based on it's value, as determined by Fangraphs Pitch Values*.

Next, perhaps the key point to understand is that we're going to be looking at pitch types -- as opposed to singular pitches, like we did with the home runs. For example, that means we'll be evaluating R.A. Dickey's knuckleball, Dillon Gee's change-up, and Frank Francisco's fastball in totality.

Trying to choose the choicest, single pitches of 2012 -- utilizing, say, Win Probability Added -- would again leave us with a predictable list of pitches that ended a bases loaded threat. Somewhat interesting, but not exactly what we're looking for. By looking at the entirety of a pitch type, we're seeing the value that that pitch was able to rack up over the course of the entire season -- net Pitch Values (divined through runs saved). Does that give a competitive advantage to pitches that were thrown more often, and thus to starting pitchers? Yes it does. But the fact remains that those pitches -- and those pitchers -- did indeed have a greater effect on the season so it's not as if that's inaccurate.

For more discussion on methodology look down below, but for now let's just get into the pitches, because ultimately that's why you clicked the link:

If this comes as any degree of surprise to you, then you simply weren't watching the Mets in 2012. Dickey has spent the last three years perfecting the knuckleball, but he revolutionized the pitch in 2012. There's a case to be made that his was the greatest knuckleball ever thrown last season; naturally it was the best pitch on the Mets. In fact, as measured by net Pitch Values it was the second-most valuable pitch in baseball in 2012, trailing a few narrow percentage points behind Clayton Kershaw's fastball.

The interesting qualifier here is that technically, Dickey throws (at least) two unique and different knuckleballs that probably warrant separate buckets (standard and angry). However, until Pitch F/X can parse them, for our purposes it remains one awesome, awesome pitch.

And the angry knuckler:

And one more truly amazing one for good measure (NOTE - h/t to @james_in_to for creating this masterpiece; follow him based on this GIF alone):

While his curve might get more attention, it's the cutter that did more damage for Niese in 2012. In fact, reviewing his pitch sequencing data Niese developed quite the ability to frustrate right-handed batters by placing the pitch just off the plate and watching it run over the black for a called third strike. Niese garnered called strikes with the pitch 20% of the time he threw it, the highest mark of his career. Observe this effect in 2013 based on the amount of righties that walk back to the dugout grumbling about the call (if only that were a stat).

In fact, the cutter has shifted Niese's overall profile quite a bit over the past couple of years (click image to embiggen): 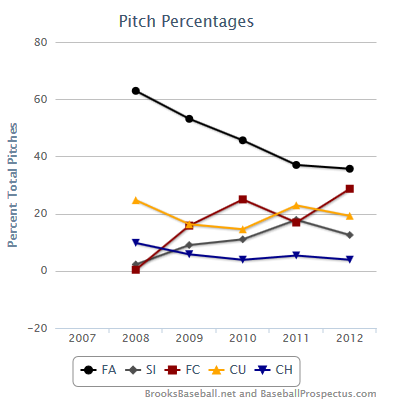 A pitch that he rarely utilized over his first two seasons is now up to nearly 40%. As he's refined this offering he's clearly used it to supplant his standard four-seam seam fastball -- likely accounting for the gradual improvement of Niese's stock as a pitcher.

Rauch did his best work after many Mets fans stopped paying attention:

That second half success was due, in very large part, to his slider. When reviewing the particulars, Rauch's slider has always -- or since the advent of Pitch F/X/ in 2007 -- been an effective pitch; good swing-and-miss rates, hits for strikes a good amount, etc. However, it took a huge step forward in 2012. Was luck or true improvement? Who knows, I'd put my money on some luck based on the hugely massive gains in batted ball outcomes. But you can't argue with the results (click image to embiggen): 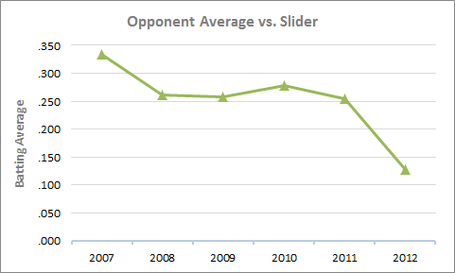 This pitch consistently exhibited more movement -- as measured by Pitch F/X -- than any other curve on the Mets in 2012. For that reason, Niese was only able to spot it for strikes about 63% of the time, but when he did batters couldn't hit it. In 2012, opposing batters hit a paltry .221 off the breaker while slugging just .296, by far the best mark among Niese's five-pitch repertoire. It also generated a tremendous 23% whiff rate, another best for Niese.

One of the things I'm most intrigued about coming into 2013 is whether or not Matt Harvey can repeat the kind of stuff he showcased during his 59-inning debut. That's because as strong as his stuff looked in Buffalo, it jumped up a notch at the next level. That includes his velocity readings, which in Buffalo lived between 92-95 MPH yet at the big league level averaged 94.7 MPH, often flashing as high as 98 MPH.

These aren't necessarily next on the list, but I do think they warrant some attention:

Based on the fact that Pitch Value is a cumulative stat, it's tough for relievers to get on this list and Parnell ranked number six. Otherwise nothing too surprising here. The pitch is often straight as an arrow, yet the fact that Parnell's four-seam fastball regularly hits triple-digits makes it a premium offering. What's more, the development of his curve has only served to make his fastball that much more potent.

However, it's worth noting that after ranking fifth in baseball with a 97.2 MPH average velocity in 2011, he was down to 25th with a pedestrian 95.7 MPH in 2012. We can sort of explain that away anecdotally based on the new approach he seemed to utilize in 2012 where he'd often hold back early in at bats, seemingly to better locate and get ahead. By the numbers, he averaged 93.3 MPH on first-pitch four-seamers.

Didn't know he threw that pitch, did you? He did so a handful of times in 2012, and when he did it was a remarkably well-developed, effective offering:

I know what you're thinking: Rob, you ignorant fool, that's clearly just another knuckler...

That's right, it's a change-up -- a very good change-up. In fact, as measured by Pitch Values per 100 pitches thrown (which basically just standardizes Pitch Values; discussed in more detail below) this was actually the most potent pitch on the 2012 Mets, far more so than the knuckleball. Now there is clearly some sample size trickery going on here, but at the very least it tells us that the guy can throw a solid change-up. Honestly, what can't he do?

To that end, his fastball was measured at 4.8 Runs Saved as well.

I called some attention to this offering earlier. However, I feel it deserves further recognition; it might not rank among the best pitches in Runs Saved, but it's changing the way Bobby Parnell pitches -- overwhelmingly for the better. As compared to his slider -- which he junked altogether in 2012 -- the curve exhibits more movement, lands for strikes more often (65% vs. 62%), and most importantly exhibits a much better variance in velocity from the heater (83.4 MPH vs. 87.6 MPH). So aside from being a better quality breaking pitch, it's becoming a legit off-speed pitch -- making it a lot tougher for batters to sit on the fastball. Hat tip to Jason Isringhausen.

Additionally, Parnell has shown a growing proficiency for floating that curve with two strikes -- either dropping it into the top of the zone for a called third strike or letting it drop out of the strike zone for a swinging strikeout, as above. Back in April, Parnell threw the curve 23% of the time with two strikes; by September he was comfortable enough to throw it in 44% of two-strike counts.

Unlike the rest of these pitches, this is mention is not so honorable. That's because for the first time in Johan Santana's ten-year big league career his once otherwordly change-up derived a negative value over the course of a season. For reference, this is a pitch that at it's best garnered 28.0 Runs Saved in 2006. Even in 2008 -- his first season with the Mets -- it was still generating 22.9 Runs Saved. But that was back when it's partner in crime, the fastball, averaged 91 MPH, not 88.4 MPH. He subsequently dropped the change-up from 80.1 MPH to 77.3 MPH to maintain that differential, but if everything's getting slower that is ultimately pushing the odds into the hitter's favor.

As previously mentioned, Fangraphs does indeed offer a Pitch Value per 100 pitches thrown metric -- meant to represent more of an average, thus leveling the playing field between pitches thrown rarely and those thrown more often. This gives relief pitchers more of a fair shake. However, to me the issue with that measure -- aside from the obvious potential for sample size issues -- is that pitch values are determined based on outcome, and most pitchers rack up an inordinate amount of their strikeouts -- the most valuable outcome -- on secondary or aptly-named 'putaway' pitches. While the fastball might be their clear bread and butter, most pitchers tend to use it more as a 'setup' pitch to get ahead in the count -- which is not valued as highly. This leads to abnormalities that just don't feel right; i.e. Dickey's change-up appearing over five-times more valuable than his knuckleball.

Another practical example: Bobby Parnell will usually do most of the heavy lifting in a plate appearance with his fastball, but as we noted recently has taken to fooling hitters on strike three with his developing curve. To any rational observer it's clear that the triple-digit fastball is the premier offering in Parnell's repertoire. Hell, if you asked the batter they'd almost certainly agree that forced awareness of the fastball led to the strikeout. Yet it's the curve that gets awarded more value based on that sequence of events -- namely, the fact that a strikeout affects run expectancy more than just a strike. To me, the volume behind net pitch values helps to counteract such abnormalities due to sequencing -- at least as much as possible.

Special thanks to Carson Cistulli of Fangraphs, @james_in_to, and the big man Eric Simon for the GIF support