This Week in Baseball Season One Recaps: Episode 7

This Week in Baseball '77 continues with a special look at Canada, an All Star Game preview, and some terrible, terrible fielding!

Share All sharing options for: This Week in Baseball Season One Recaps: Episode 7 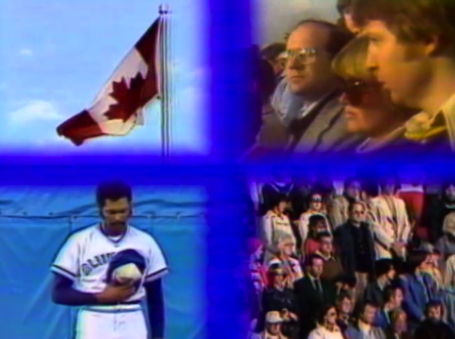 TWIB begins its coverage of the week ending July 12, 1977 with the odd four-way shot you see above, depicting a scene of Canadian patriotism, while "O Canada" trills in the background. "Canada--Where fans are really in love with baseball!" Mel Allen chirps. His contention is somewhat undermined by an aerial shot of Toronto's Exhibition Stadium that appears to be less than half full. However, we're also told that the Blue Jays trail only the Yankees and Red Sox in AL attendance this season, so I don't know what to believe anymore, man.

Allen also tries to sell us a bill of goods that the Blue Jays are on a hot streak, or something, because of players like Otto Velez (the AL's player of the month for April) and #1 expansion draft pick Bob Bailor. In truth, the Blue Jays are experiencing the growing pains every expansion team does; at week's end, they're in last in the AL East, 18 games under .500 and 14.5 games out of first. Also, most of the footage from this segment comes from a series in Boston, so all the big Toronto hits are accompanied with canned applause despite the hits clearly coming in front of a Fenway crowd. Oh, and the Blue Jays are swept three straight in this series. Don't try to Moon Landing this Blue Jays story, Mel. Why must you turn TWIB into a den of lies?

To be fair, Allen does admit, "The Blue Jays have got a long way to go to get it all together, because very few of their players have much big league experience." This caveat is underscored by several shots of Blue Jays failing to catch baseballs and almost killing each other in head-on collisions. Veteran leadership is needed to show these youngsters the way, which is why the Blue Jays picked up 39-year-old Ron Fairley, who gives a deadly serious interview for the TWIB cameras. More serious, in fact, than the weird PSA he did for MLB a year before, in which he seemed to encourage youngsters to pursue a career in baseball as if he were suggesting they join the military.

My job here in Toronto is to play the caliber of baseball that I have been playing fot he past 17 years, and to help some of these young ballplayers mature and become major league players a little bit sooner.

The sense of purpose and drive in Fairley's voice is offset by the fact that he looks kind of ridiculous in a Blue Jays uniform. And if you believe his presence is mostly an excuse for Allen to say "Ron's been doing Fairely well with the bat!", then you've been paying attention to these recaps. Well done.

TWIB continues their hot Canadian action with a trip to Montreal. Allen notes the Expos have left behind rickety Jarry Park and moved into the brand new Olympic Stadium. An overhead shot of the place as the Expos run on the field manages to make a brand new stadium look really, really run down. But we do get some great shots of a young Gary Carter, who is the focus of this piece. 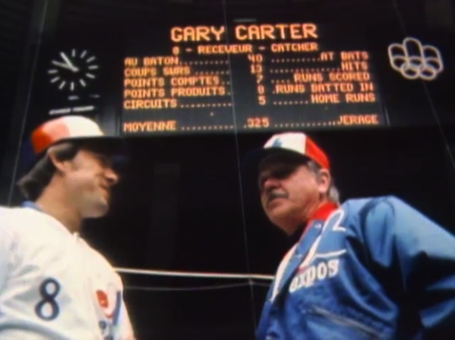 The Kid talks about studying French so he can connect with the local fans. "Carter plays with flair and intensity, a big hit with Montreal fans," Allen tells us, alongside strange shots of the catcher stretching before a game. "I just want to win more than anything, I can taste it!" Carter beams.

TWIB implies that winning will come sooner than later, thanks to ace Steve Rogers and a young, home-grown outfield of Andre Dawson, Warren Cromartie, and Ellis Valentine. Or maybe it's just the secret signals manager Dick Williams receives, as we see him in the dugout with World War II radioman headphones on.

We also get to see Valentine belt a homer at Wrigley Field, which Allen calls "A Valentine Blast" in a nod to the sponsored home run calls he once did for the Yankees--Ballantine Blasts, after the beer. Here's what a Ballantine commercial looked like during Allen's announcing heyday. Enjoy seeing this in your nightmares!

Next, we are treated to an extended segment on the impending All Star Game and the players who fans voted for to start it. "A record 12 million ballots cast this year!" Allen crows. The Dodgers' Steve Garvey was the National League's top vote getter, which means we get to hear his rambling, self righteous "acceptance speech."

It's an opportunity for a young man in America to play professional baseball and then be selected by the fans of the country to represent the National League in what is probably the finest summer classic in the world.

The NL has won the All Star Game five years in a row, and dominated it for the last 20 years or so. Most of the senior circuit's starters are veterans of the midsummer classic, like Garvey, Johnny Bench (10th ASG), and Joe Morgan (making his seventh trip, "and as everyone knows, the little guy can do it all!" Allen shares). Amazingly, Ron Cey gets the nod at third base instead of Mike Schmidt, who has been clobbering baseballs at a ridiculous pace. The only first-timer in the NL's starting lineup is Pittsburgh's Dave Parker, praised by Allen for his prodigious homers and his cannon of an arm. "He can hit them into spaces, and he can nail them on the bases!"

By contrast, Allen tells us, "the American Leaguers are young and hungry for a victory!" The AL has a few repeat offenders, like Carlton Fisk, Carl Yastrzemski, and Rod Carew, who paced the league by receiving 4 million votes. "That's enough to win the governorship of Minnesota!" Allen marvels. According to the 1980 census, Minnesota's total population was just a shade over 4 million, so yeah, that'd do it. There's also Reggie Jackson, who edged out Fred Lynn in the final days of voting, which gives TWIB an excuse to run a clip of his monstrous home run during the 1971 All Star Game in Detroit (the last time the AL won).

Otherwise, the AL starters are a fresh-faced bunch, like Boston shortstop Rick Burleson and Yankees second baseman Willie Randolph. "At age 22, he should be an All Star for years!" Allen predicts. Richie Zisk, new to the AL and belting home runs left and right, is another first-time All Star. Third baseman George Brett is only making the trip for the second time. He's so new that even his hometown scoreboard has trouble capturing his likeness. A for effort, Kansas City, but this graphic has more of a Lenny Dykstra quality to it. 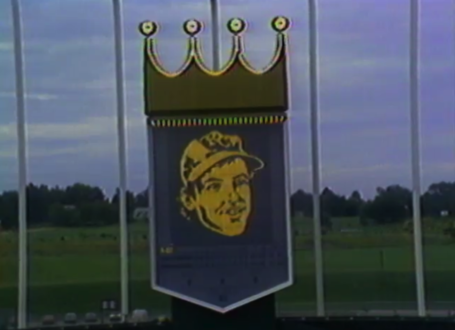 Allen sums up this segment thusly: "Our crystal ball is sure of one thing: Tuesday night, baseball stargazing will be at its brightest!" Wait, you have a crystal ball, Mel? Why didn't you tell us sooner?! Ask it when Skylab will come down!

Footage of some high-steppin' groundskeepers leads into this week's "wacky" segment. First, an Expos-Cubs game at Wrigley. The home team is getting pounded, so rather than burn more of his bullpen, Chicago manager Herman Franks enlists left fielder Larry Bittner to take the ball. It goes about as well as you might expect. Bittner's second pitch sails over the batter's head, which prompts a stern warning to both benches from the umpire, which in turn prompts howling from the Cubs catcher to give a break to a guy who is clearly not a pitcher. Bittner throws 1 2/3 innings and allows three home runs and 6 runs. "Next time he'll tell the manager to let the shortstop do the pitching," Allen says, consulting his crystal ball again, I assume.

In a Reds-Padres tilt in Cincinnati, a San Diego batter hits a lazy fly ball to right field. Eddie Armbrister catches the ball, then drops it. He realizes this does not count as a putout. Unfortunately, his teammates do not, because they've all trotted off the field, assuming the last out of the inning was made. Armbrister is forced to sprint toward the infield until the other Reds realize their error. By the time Armbrister has anyone to throw to, the runner has made his way to third base. "Even the Big Red Machine can break down sometimes," is Allen's philosophical take.

We get a similar miscue from an A's-Royals game, when an Oakland batter hits one to right center. Amos Otis and Al Cowens both pursue the ball, then both mysteriously pull up, each assuming the other will get it. Their error is exacerbated by the fact that neither outfielder pursues the ball with any haste. Once again, the batter receives a gift triple. And he didn't get them anything!

In a White Sox-Tigers game at Comiskey Park, Detroit speedster Ron LeFlore isn't quite quick enough to avoid the ol' hidden ball trick. First baseman Jim Spencer fields a pickoff throw, feigns throwing it back, and then tags out LeFlore when he takes his lead. Spencer is also shown spearing a screaming line drive during the same game.

Unfortunately, the Sox are also dealt a blow in this game, when Oscar Gamble hits a sharp line drive that caroms off of Richie Zisk's ankle as he takes his lead at first base. Zisk crumples to the ground in agony, his pain made much worse by the fact that he is wearing Chicago's pillowy, untucked-in polo shirt jerseys. 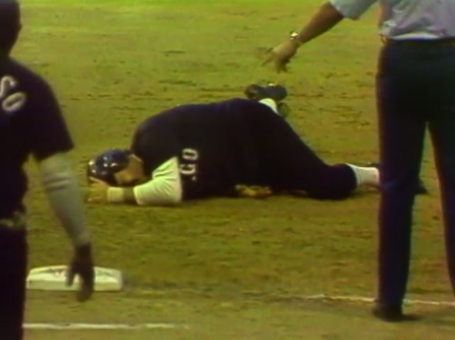 Allen assures us that Zisk "recovered quickly" from this blow, even though it looks like it might have destroyed every bone in his foot. Before this game, the Sox had a 9-game winning streak, and they end the week still, surprisingly, in first place in the AL West.

Elsewhere 'round the league, the Orioles take 3 of 4 from the Yankees in Baltimore to knock the Bombers out of first place, as a rookie named Eddie Murray drives in 12 runs during the series. Allen goes so far as to refer to youngster Murray as a "Yankee killer." Also red hot are the Pirates, who just swept a four-game series from the Phillies. The sweep was powered by Phil Garner, who hit three home runs and logged 10 RBIs while also sporting this amazing Sam Elliott-esque mustache. That's a mustache that was born to say COOOOORS, The Banquet Beer. 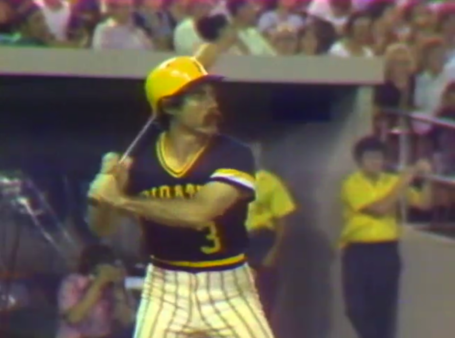 This week's Gillette Special goes to Lenny Randle of the New York Mets. With the Amazins in a precipitous slide (a nine-game losing streak, to be exact), Randle stops the bleeding with two amazing diving catches down the third base line to rob hits. The second of his great plays foils a squeeze bunt attempt and keeps the game tied in the top of the 17th inning (!). In the bottom half, Randle ends the game all by himself with a walkoff home run. 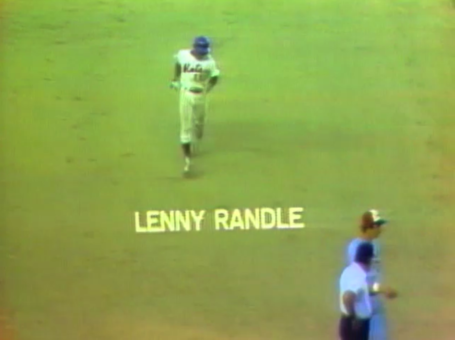 You know folks, super efforts like that are really a thrill to watch! It can happen anytime, anywhere MLB is played. Take yourself out to the ballgame some time!

Why don't you tell me if I'll make it out to the ballpark, Mel? You've got the crystal ball, after all.

Nest week: A look back at All Star Games of yore, and this season's midsummer classic played the newly refurbished Yankee Stadium