Wilpons to pave parking lot, put up a shopping mall.

With all of the early coverage of Spring Training, it's been easy to miss the recent details that emerged about the further development of a number of the areas around Citi Field.

Namely, some interesting reports surfaced earlier this week about how the Wilpon-led Sterling Equities group pitched -- and was subsequently denied -- a request for a large-scale casino in the area of Willets Point, directly adjacent to the baseball stadium. The group had even lined up the Southampton-based Shinnecock Indian Nation to operate the supposed facility; talk about having your ducks in a row.

In any case, the Wilpons' grand gaming plans will not come to pass. According to New York State law, live-dealer casinos are not legal in New York except on tribal lands. Instead, they'll stick to the original blueprint -- agreed upon in June 2012 -- which calls for a 200-room hotel directly across from the stadium on 126th Street. Additionally, phase one of the long-term re-development plan also calls for a 1.4 million square-foot retail center/shopping mall in the shadow of the baseball field. The mall will displace Citi Field's central parking lot: 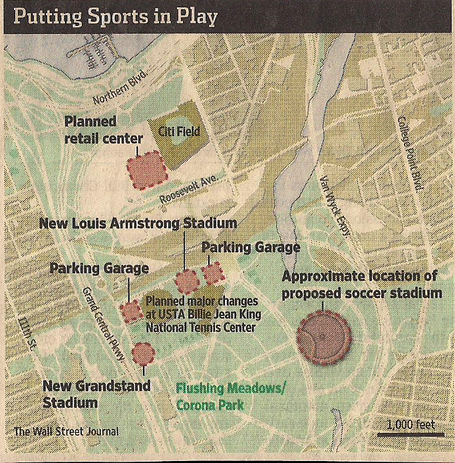 Where will we park? Who knows. And I can't say I'm excited about all the additional congestion related to a shopping center either.

Later phases of the plan call for additional housing and retail/restaurant locations to be developed on the adjacent 126th St. strip. However, these latter plans are all slated for completion at some point before 2025 so don't go breaking any plans just yet.

As the above graphic diagrams, there have also been tangentially related talks about more sports stadiums in the immediate vicinity of Willets Point -- additional large-scale tennis grandstands at the nearby National Tennis center and a 25,000 seat Major League Soccer stadium smack in the heart of Flushing Meadows/Corona Park.

In short, Willets Point is going to look quite different and could actually end up being pretty cool -- and pretty profitable for the Wilpons. But it might be a while.