What is the the true financial implication of a "Super Two" player? As you may have guessed, it can be a heck of a lot more than a few bucks.

Share All sharing options for: The True Cost of a 'Super Two' — Why Travis d'Arnaud Belongs In Las Vegas

Rebuilding stinks. No matter how you spin it, rebuilding generally means an organizational shift toward mediocrity while the newest navigator re-charts the newest course. Not to mention re-tightening the same old belt. If I were a Batman villain I might equate it to a purging fire, natural and necessary once a forest has grown too wild.

Nevertheless, it’s not fun. It’s frustrating, it’s disheartening, and worst of all, it takes a really, really long time — that is, if you do it right. And that’s the key point to remember about rebuilding: It cannot be rushed. For if it is, then all of the meticulous planning, the painful austerity, basically the ubiquitous sense of general malaise, could all end up being for naught.

I mention this not to join the pity party hovering around the Mets. Instead, I’m referring to the impending light at the end of the tunnel. That’s because I genuinely feel that the worst is over. However, that does not mean that it’s time to break out the bubbly — or the top prospects, for that matter. I refer to the growing sentiment among Mets fans that would have newly-minted top prospect Travis d’Arnaud break camp with the big league team, bypassing a return trip to the Triple-A Pacific Coast League and the bright Vegas lights therein.

Don’t get me wrong, it’s certainly an understandable notion. Once again, Mets fans have been waiting a long damn time for the front office to throw them a bone, some semblance of hope that this year is the proverbial corner. Beyond that, d’Arnaud is batting .400 on the spring, while more importantly showcasing the kind of skills that suggest a major league catcher in the early throes of cornerstone status.

Should d’Arnaud appear for the Mets on Opening Day — or any other day before mid-June — he will become what is known as a "Super Two" player.

But that’s not the issue here. Like any team attempting to regain its footing, this is an issue of resources. In other words — like any good Yankees blog will tell you — it’s about the money (stupid). Should d’Arnaud appear for the Mets on Opening Day — or any other day before mid-June — he will become what is known as a "Super Two" player. Super Two players are eligible for salary arbitration a year earlier than is otherwise contractually obligated. That means that a pre-mid-June debut for d'Arnaud would make him eligible for four years of salary arbitration rather than the standard three that a player is entitled to before hitting free agency. To be clear, Super Two status is a different animal than the year of team control the Mets would surrender if they were to put d'Arnaud on the roster anytime before late April -- a horse of a different, but equally harmful color.

The thing about wandering through a wild baseball forest for a few years is that you don’t typically care about things like that. Usually you’re just looking for a way out. So the temptation is to say, "who cares about an extra year of arbitration?"

Even the enlightened fan might point out that the organization will still maintain the same six years of control over said player, assuming d’Arnaud’s debut was and is slated for some point after April in 2013. So why sweat those few extra bucks?

Well, my friends, I am feeling pretty sweaty. What follows is an analysis of the true financial implication of a Super Two player. Because as you may have guessed, that incremental increase in salary, over that of a standard ballplayer, can mean a heck of a lot more than a few bucks, or "future pennies," as they were recently characterized by another Mets blog.

What I have done is gathered year-over-year salary figures, as provided by Cot's Baseball Contracts, for a representative sample of players with Super Two status as defined by MLB Trade Rumors. Most of the players analyzed gained Super Two status between the years of 2007 and 2010.* The pool includes 35 active players: 12 pitchers and 23 position players.**

The secret sauce of the study is the year-over-year increase in salary. I recorded each player's percentage increase for each of the first six years of his career, the years of hypothetical original team control. Obviously the first two years aren't important since Super Two status kicks in — you guessed it — after year two. It's the arbitration years we care about : the final four for Super Twos and final three for standard players. I then averaged each increase by year across all 35 players:

At this point, we know how much the average Super Two player's salary increases over each of the first six years of his career. However, to make that meaningful we need a more standardized figure to compare it against. Fortunately, instead of performing a similar exercise on a much more daunting representative sample of players with a standard contract status, the Internet has done the heavy lifting for us. A couple weeks back Seattle's KOMO News provided the average major league arbitration increases over the past three seasons:

It's readily apparent why a player would want to go to arbitration early. I can't really remember the last time I got a 123% raise. Further, it becomes even clearer when you consider that in those first three seasons under contract —when the team basically dictates salary autocratically — that the average increase is significantly lower. Obviously the exact amount varies; some teams are very generous when they don't have to be while other teams will maximize their dollars/contractual position as long as they possibly can. In recent years the Mets have come in around 12 percent. The average for our group of 35 players is 19%, and since that's a decent sample from all around the league, let's use that as our proxy.

So now that we have our Super Two arbitration averages and we've established a standard player baseline — and we already know that the major league minimum salary for 2013 is $490,000 — we can start to talk about results. First, let's look at those percentages side-by-side:

Obviously we took an average of the last three seasons for the standard player arbitration. And the fact that we're using KOMO's standardized arbitration figures -- which do not differentiate between arbitration years -- means that we'll apply the same number across all three seasons. Thus, we won't see the peaks and valleys that actually exist from year to year. Obviously we can see that effect in the Super Two figures, where the bulk of the growth takes place in the first year of arbitration.

Now let's incorporate the 2013 league minimum salary and see what this growth actually looks like (click images to embiggen): 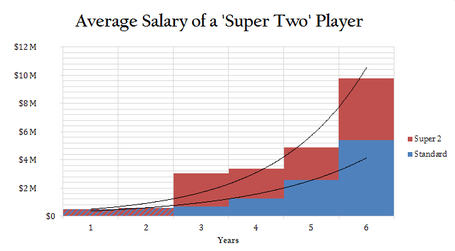 And broken out side-by-side: 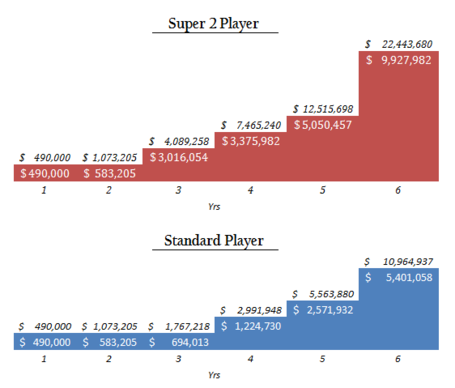 It should also be pointed out, however, that our Super Two pool is something of a stacked deck, in that players who force their employers to call them up early are inherently a cut above the rest. Just look at the names of some of our 35-player pool: Buster Posey, Tim Lincecum, Justin Morneau, Matt Garza, Ryan Howard, and Robinson Cano. An additional year of arbitration is important, but each year's percentage is based on the performance of the player earlier that year. So it's only fair to keep in mind that we're working with a pool of guys that we can reasonably assume may have already distinguished themselves as superior players.

For that reason, many teams hedge their bets by locking up said players with multi-year buyouts that preempt the arbitration process. Below, I appended buyout data, which was relevant for 15 of the players, including Josh Thole, in at least one of their first six seasons: 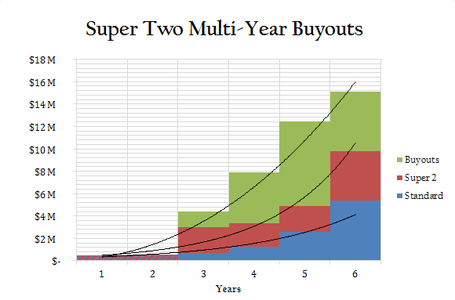 And for you number crunchers:

Make no mistake, the buyout acts not as a cure-all as much as a band-aid, meant to protect teams from potentially exorbitant salary obligations, as we saw in the case of Ryan Howard's record $10 million payday in his first year of arbitration, or Cole Hamels earning $15 million in his fourth go-around. Again, this is an example of the blessing and the curse of having above-average players. 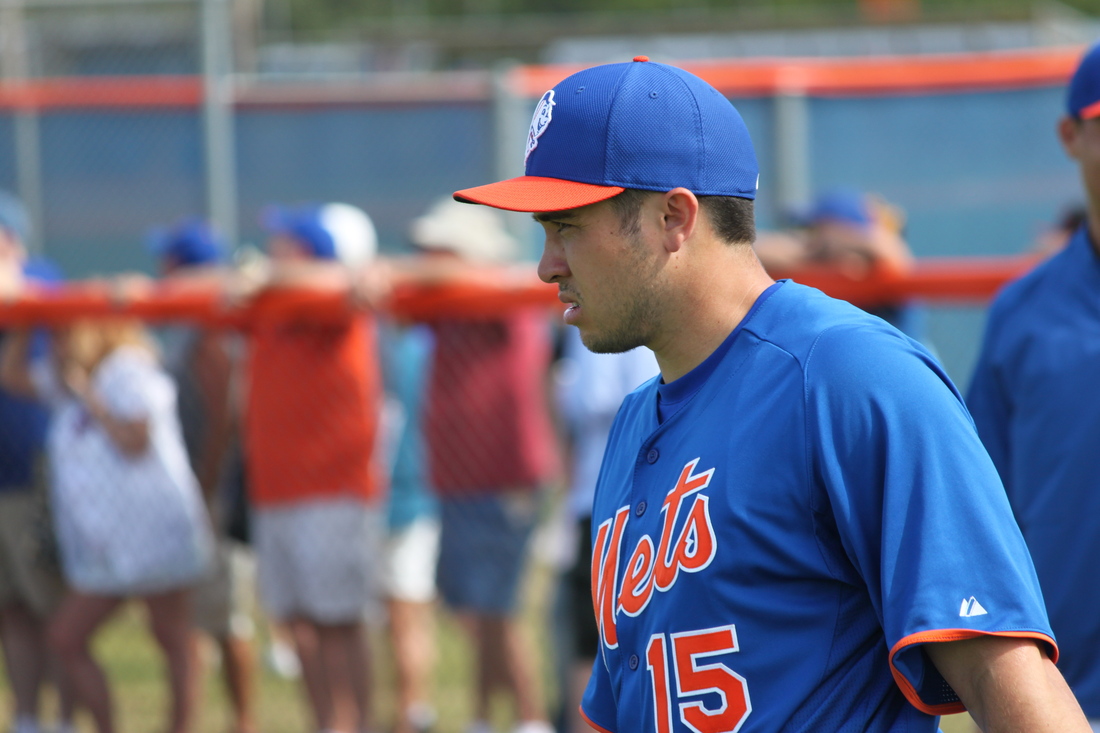 Obviously the Mets hope to have proverbial "good problems" like this when it comes to Travis d'Arnaud. In fact, buying out your 20-something cornerstone catcher because he's playing too well to risk salary arbitration is pretty much the baseball equivalent of a first-world problem.

However, it is once again important to remember that the Mets aren't there yet. Heading into a campaign where they run the serious risk of a fifth-straight 70-something win season, this team is more accurately classified as third-world status. For this very reason it should be clear that the idea of d'Arnaud heading north at the end of camp is folly, especially now that we further understand the salary implications.

We now know that we can expect, on average, a roughly $12 million swing in salary if d'Arnaud makes the club, a figure that, for reference, represents nearly 15% of the team's current 2013 salary structure and could easily climb were he to fulfill his promise. For what? A couple of months of respite from the hollowness of rebuilding?

Naturally, we all expect the club's payroll to increase in the coming years; however, there are few teams for which $12 million doesn't represent a sizable hindrance to operations. And at this point the last thing Sandy Alderson should be doing is creating any kind of long-term, self-made hurdles on the path back to relevance, unless of course they're deemed critical to the club's future success.

The Mets' shot at the 2013 World Series does not hinge on their rookie catcher, as the Giants' did in 2010.

Once again, rebuilding the right way stinks. It often means that the hardest decisions are often the right ones. I am not saying this move would not be gratifying. Nor am I saying that there does not exist a situation where this is the right move. But this is not one of those situations. The Mets' shot at the 2013 World Series does not hinge on their rookie catcher, as the Giants' did in 2010.

Weary Mets fans remember the highly unexpected success of the Orioles and Athletics in 2012 and yearningly envision a 2013 where everything finally breaks right in Queens, where such a call-up does indeed turn the tides. However, we know that that sort of thing doesn't happen often. And deep down we know that it's just not prudent to make such far-reaching and unnecessary roster decisions based on win-starved hopes and far-fetched dreams.

We'd all rather win now, but we cannot let that make us lose sight of three years from now. We're not quite out of the forest yet.

*I only used a handful of more recent Super Twos as the younger/newer players are not as useful to our study in that they don’t have as long a financial track record to follow.

**I limited the list to actives because reliable salary data for inactive players is much harder to come by.