For a time, Bernard Gilkey was the model player, and he put up one of the best offensive performances in Mets history.

Share All sharing options for: Top 50 Mets of All Time: #36 Bernard Gilkey

Bernie was always a whack ‘em, beat ‘em guy. He always had to work harder. It’s like two students. One kid doesn’t work and gets all As. The other kid works hard just to get Bs. I was a little surprised, for sure, that he hit 30 home runs. When he hit 16 for me, that surprised me.

Otis Bernard Gilkey went undrafted out of high school and turned down a Division One basketball scholarship to sign with his hometown St. Louis Cardinals for a few thousand dollars. Four years later, hitting .231 in Low-A ball, it looked like he should have taken mom's advice and the free ride. But little by little he showed his stuff — stealing bases, scoring runs — and in 1990 won a spot on the Busch Stadium run-and-gun Cardinals.

"When I grew up, there was definitely a certain way the Cardinals played," Gilkey remembered. "Ozzie [Smith] and Willie [McGee] really drilled me, told me how to be a major leaguer, something that goes even deeper than numbers."

"The Mets were pond scum in St. Louis at that time."

Something else stuck in his head from that era: "The Mets were pond scum in St. Louis at that time."

Gilkey, playing left field, became a regular contributor in 1992 and over a four year span hit close to .300 and amassed 10.9 bWAR. After the 1995 season, in which he hit .298/.358/.490, with 17 home runs, the Mets acquired the blossoming right-handed slugger for Erik Hiljus, Eric Ludwick, and Yudith Orozio, who would combine for a career bWAR of negative 1.8.

The 29-year-old was sorry to leave his hometown as his wife had just given birth to their first child, but knew he could make the adjustment. "I came to go to work," he said. "The atmosphere around Shea is fine." 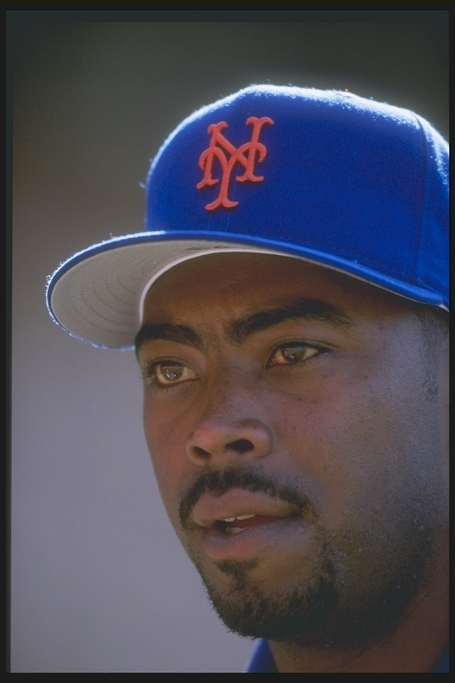 The Mets were changing, too. Desperate to grow out of the Worst-Team-Money-Could-Buy era, the team missed no opportunity to trumpet Gilkey’s impressive work ethic. As he tore into a monster season, his reputation as a player's player only grew. Hitting coach Tim McCraw called Gilkey a "throwback," extraordinary for his "drive, the pushing of other players, the leadership."

Pitcher Rick Reed admired Gilkey's acumen in left field, where he would lead the league in outfield assists. "Nothing he does amazes me anymore. I’m just glad to have him behind me."

The Daily News, in a typically lofty strain, would write: "His 30 home runs and 117 RBI last season made him invaluable. His steady demeanor and mature perspective made him irreplaceable."

It was quite a season, and Gilkey, for a time, was little short of the model baseball player. 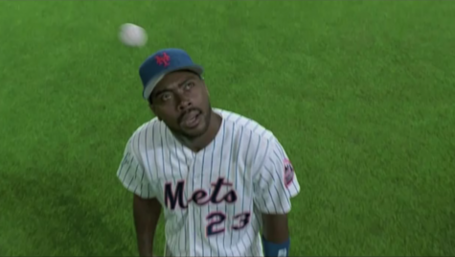 There’s a scene in Men in Black in which a spaceship appears above Shea Stadium, and Gilkey, stunned, lets a fly ball bop him in the head. In 1996, a similar fate might have befallen fans in the home run seats, so awesome was Gilkey’s offensive display. Forgive me, and let's keep moving.

In '96, Gilkey hit .317 with 30 home runs and 117 RBI and scored 108 runs. His 7.8 bWAR ranks with David Wright's 2007 and Carlos Beltran's 2006 as among the greatest seasons ever by a Mets position player. As Eric Simon has pointed out, the season cracked the Mets leader board in a slew of offensive categories: 1st in doubles, 2nd in total bases, 2nd in runs created, 3rd in extra-base hits, 3rd in RBI, 6th in runs, 7th in slugging, and 8th in OPS.

Though in some ways overshadowed by historic campaigns by teammates — Lance Johnson set the team record for hits and triples and Todd Hundley for home runs — Gilkey's was the finest. He hit a full 50 percent better than league average while taking 97 walks and playing a mean left field (1.4 dWAR). To this day, the Mets have not brought in a ringer who so immediately and convincingly handled the bat. 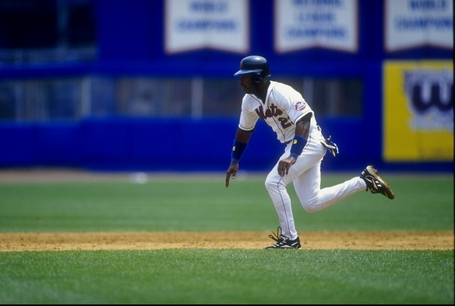 In the offseason, the Mets and Gilkey avoided arbitration by agreeing to a four-year, $20 million deal, with a vesting option for a fifth year at $5 million. Mets GM Joe McIlvane told reporters, "You’re paying him for what he’s going to do, not what he’s done. He’s got the best years of his career staring him in the face." The undrafted 30-year-old star earned his first big pay day, and proceeded to come to earth like the Men in Black spaceship. 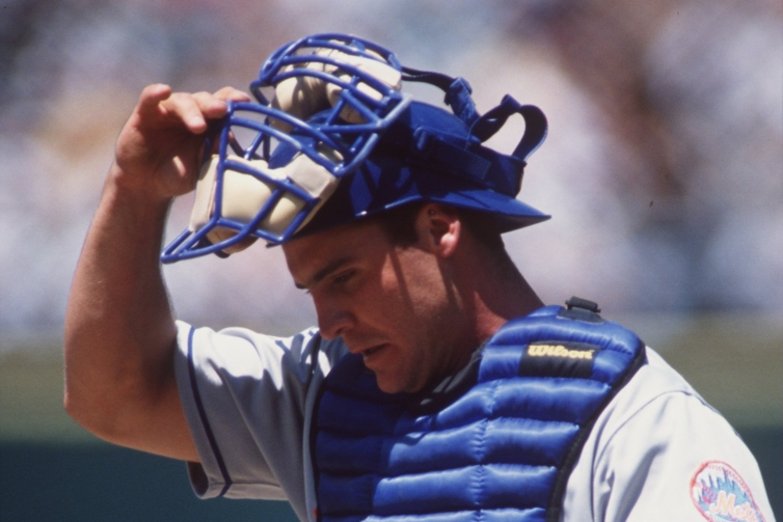 In 1997, Gilkey’s OPS dropped exactly .200 points to .755. While he kept up the walks, his batting average plummeted with his fallen-off batting average on balls in play. What had once been a line-drive-producing swing was turning over the ball and rolling it to infielders. Manager Bobby Valentine was not short of theories, from the need for contact lenses to mechanical issues: "It is my opinion that his swing is kind of upside down. He leads with his top instead of his bottom. He is rotating too soon with his upper body."

"It shouldn’t be that tough mentally," Valentine added.

The honeymoon didn't end immediately. Teammate John Olerud was "really impressed" by Gilkey’s engaged attitude in even his worst days, and Gilkey was just as complimentary of his teammates’ support, particularly Edgardo Alfonzo’s. Gilkey declared himself "proud" of his grinding effort despite the disappointing results. But whatever work he put in, it didn't work to sustain the magic, and he finished the season as a dead-average hitter.

In the early hours of a spring morning in 1998, police stopped a vehicle that was straddling two lanes. The driver, Bernard Gilkey, smelled of alcohol and several times failed to bring his finger to his nose, "striking his mouth," the St. Lucie police report noted. Gilkey responded with the sort of uncomprehending "oops" that makes drunk driving so dangerous, first mumbling to the press about a faulty tail light and "two beers," then admitting "a mistake."

It was an inauspicious start to a season of further slides and ultimately, the parting of ways. Gilkey batted just .227 and hit four home runs in a half-season in Queens, before being packaged with Nelson Figueroa and cash to the Diamondbacks for Willie Blair and Jorge Febregas. In three-plus remaining seasons as a pro, Gilkey had one fine campaign across 94 games in 1999, but was for the most part a nonentity.

In the midst of one of his slumps in 1997, Gilkey was asked whether the scuffling hitter we were seeing was "the real" Bernard Gilkey.