Can Terry Collins Handle A Bullpen?

Share All sharing options for: Can Terry Collins Handle A Bullpen?

As they are wont to do, Baseball Prospectus has come up with another interesting new tool to help us better analyze the game. It’s called the Bullpen (Mis)management Tool, and according to BP’s Ben Lindbergh, "the BPM Tool allows us to see the story of a team’s relief corps at a glance."

Lindbergh went on to describe the tool’s functionality in a little more detail:

"[BPM] allows us to see the average Leverage Index when entering the game for all members of each team’s bullpen, both for a full season and over time."

Here's a sneak peak of the tool's interface (click image to embiggen): 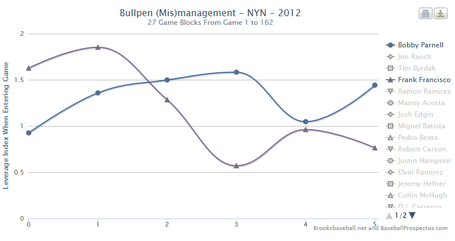 For the record, Leverage Index is the measure of the state of the game at the time a relief pitcher enters it — the bottom of the ninth in a tie game is very high leverage, bottom of the sixth in a laugher is very low leverage.

An index of 1.0 is considered average. As you can see, the user is able to toggle as many or as few pitchers as he’d like to view and get a pretty full picture of how said pitchers were utilized throughout a given period of time. In other words, it gives us a pretty nice way to evaluate Terry Collins’s effectiveness in maximizing his bullpen resources.

I will offer one bit of criticism, though: the lack of corresponding pitcher performance. It’s interesting to see how Collins might have used Bobby Parnell, but in a way we’re still stuck to guessing why his Leverage Index trends may have changed based on anecdotal evidence. We’re left to assume that perhaps his performance suffered or that Collins was just misusing him. To really get a grip on a manager’s ability to call for the right pitcher at the right time, we need to incorporate that performance factor.

So at least in the case of what you’d call the "back of the bullpen" for the 2012 Mets, I've gone ahead and done just that. In short, I've replicated the model created by the BPM and taken it one step further, incorporating ERA during the same period of time. I decided to look at Bobby Parnell, Frank Francisco, Jon Rauch, and Ramon Ramirez, seeing as how that group made up about 70% of all games finished for the Mets in 2012 (101/146).

As labeled in each of the below diagrams, the blue lines represent ERA while the red lines represent Leverage Index. Ideally, we’d want to see a divergence of the two lines; if ERA begins to climb we’d hope to see the pitcher’s LI drop as the manager realizes he should stop using a pitcher in critical game situations and vice versa. Basically we don't want to see the lines moving in the same direction, as that is a clear indicator of mismanagement by the skipper. Additionally, the time period is broken into six 27-game segments — as is the default on BP — for ease of viewing. 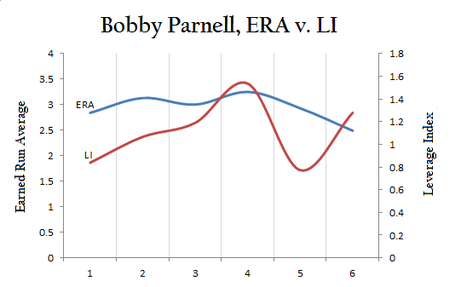 We can determine pretty quickly that the case of Bobby Parnell in 2012 was one of the easier ones for Collins due to the fact that Parnell did not have any drastic variances in performance. As a relatively stable commodity, the manager should have had a good grasp on how to use him, and Collins generally did. There wasn't a ton of mismanagement going on here.

It is interesting, however, to read into that late season dip/spike between periods four and five. Basically, following a stretch of blown saves in mid-July — his fourth and fifth versus just two saves to that point — Collins relegated Parnell to less critical relief work for the month of August before re-releasing him in high pressure, ninth inning situations in September. It's not necessarily the right or wrong move by the manager, it just continues to feed into the narrative of Bobby Parnell and the idea of closer mentality. To be continued this spring. 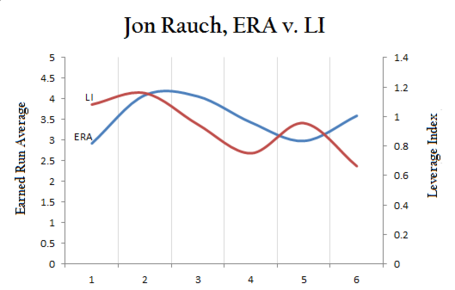 Jon Rauch was a different story as his 2012 season more closely resembled a roller coaster ride. In fact, after starting the year in Terry's good graces, Rauch stumbled early on, boasting a season-high 4.88 ERA by June 2. By the midpoint of period two, he had clearly fallen out of favor.

Despite a long, slow climb back to respectability, Collins didn't fully trust the wookie reliever again until the midpoint of period four. In his second half return to high leverage appearances, Rauch promptly struggled again (midpoint of period five) and lost his manager's trust for the remainder of the campaign.

Rauch's 2012 narrative is a frustrating one as the veteran reliever seemed to thrive, granted that he wasn't in a high leverage role. However, give credit to Collins who wasn't shy about yanking the relatively high-salaried pitcher out of the limelight. 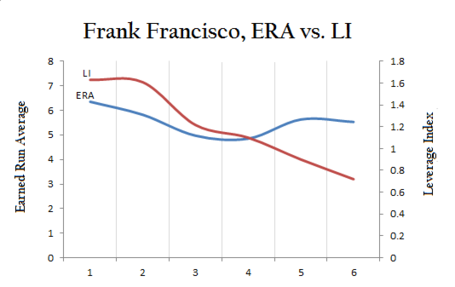 Like Parnell, Frank Francisco's 2012 season was relatively easy to manage. The erstwhile closer was a generally consistent commodity. When I say consistent, however, I mean consistently bad as he maintained an ERA at or above five for the bulk of the summer. For that reason Collins wisely utilized Francisco in less and less critical innings throughout the season. Francisco only finished a single game decided by one run after the All Star break. 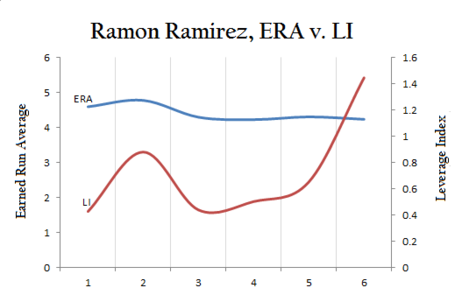 Ditto Ramon Ramirez, who was consistently bad all year. Strangely, Terry did call his number to finish six of the last eight games he appeared in, creating that late-season spike, though I guess by September nobody really gave a damn anymore.

In short, it's fair to say that Terry Collins did a fine job managing the back end of the Mets bullpen in 2012, much in the same way a pilot orchestrates a successful crash-landing of an airplane. I wouldn't necessarily call it the most daunting of tasks, with a lot of guys providing steady performance, but at least from what we can gather here he knew what he was doing. Further, this seems to jibe with the anecdotal observation of Collins as a solid bullpen tactician. Now imagine what he could do if the Mets get the guy some actual relief pitchers!