Minor League Roundup: Is d'Arnaud Overrated? Who's on Third?

Share All sharing options for: Minor League Roundup: Is d'Arnaud Overrated? Who's on Third?

The unnamed source has struck again. This time he's raining on the future cornerstone catcher parade by calling into question the long-term ability of the Mets' newly-minted top prospect Travis d'Arnaud. From last Friday's article by Andy Martino in the Daily News:

Evaluators around the league are not yet sure what to make of d’Arnaud. One rival executive noted, "He’s 24 and hasn’t played in the big leagues yet. Where was Yadi (Molina) at 24? Where was Buster Posey at 24?"

Am I the only one who immediately pictures that scene in Moneyball with Brad Pitt sitting at the table with all of the white-haired scouts jabbering about ugly girlfriends, etc whenever I hear quotes like this? The slight distinction being that this was an 'executive', not necessarily a scout -- but hell, a Stegosaurus and a Triceratops are both dinosaurs, right?

For reference, here's what 'Yadi', Buster Posey, and the rest of the top ten catchers in 2012 — as determined by descending bWAR — were doing in 2004. More specifically, the question of 'where they were' to me means what had they done to that point; so I'll give you a brief summary of each of their age 23 seasons:

Obviously Posey is the Holy Grail of young catchers. However, even the great and powerful Yadi hadn't established himself by his age-24 season -- nor had many of the top catchers in today's game. The fact that d'Arnaud has not appeared at the major league level to this point is nothing more than a coincidental combination of relatively strong catcher depth in Toronto as well untimely injuries. All I can say about the supposed rival executive is that I'm glad he's not a member of the Mets front office.

With the recent news about David Wright's balky intercostal muscle, there's been one question swirling around camp over the last few days: Who mans the hot corner if the team's franchise player cannot make it back for Opening Day?

Some hypothetical debate ensued, however it seemed pretty clear that everyone's Terry Collins's favorite understudy, Justin Turner, seemed destined for the role. That is, until until Turner too came up lame after making an awkward play in last Saturday's game. Initial returns are relatively positive and Turner reportedly feels he'll likely be able to get back to full strength in time to answer the bell.

The murky situation begs the question about who plays the third fiddle, should the need arise. There are four legitimate candidates.

The 27-year-old infielder has actually been featured at third more than any other player this spring, so he would seem an easy choice -- except for the minor fact that his performance has been atrocious. Hicks is currently batting .133 on the spring with 15 strikeouts in 30 at bats as well as three errors. And that's nothing new as the former Athletic posted an almost identical line (.133, 42 strikeouts in 90 at bats) in his brief major league career. In the minors he's boasted very strong power numbers, knocking 18 home runs in each of the past two seasons. But he's also consistently posted unsustainable 25% to 30% strikeout rates throughout the high minors. In short, not the ideal choice.

Unlike Hicks, the 30-year-old former second rounder has hit quite a bit this spring, featuring a.296/.424/.593 triple slash thus far. In fact, based on spring stats you'd think Bixler was a great choice given his career 1.027 OPS in March. However, there are three reasons why Bixler won't make the team: One, he's has already committed five errors playing second and third. Two, he's not on the 40-man, which is already facing a tight squeeze come Opening Day. And three, in 183 regular season games Bixler is a career .189/.249/.269 hitter. In other words, great choice if you want to win games in the spring, not as much once the real games begin.

The 21-year-old top prospect shortstop-turned third baseman-turned second baseman would seem an interesting pick following his breakout campaign for Double-A Binghamton in 2012. Additionally, he is already on the 40-man, and though he didn't hit much in his brief time in major league camp he acquitted himself nicely with the glove this spring. However, while he's positioned himself well to potentially make his major league debut at some point in 2013, should Flores stall in 2013 it would seem a waste to burn an option year based on the seemingly short-term nature of the current need. That and the fact that Double-A is still a huge jump to the major leagues. 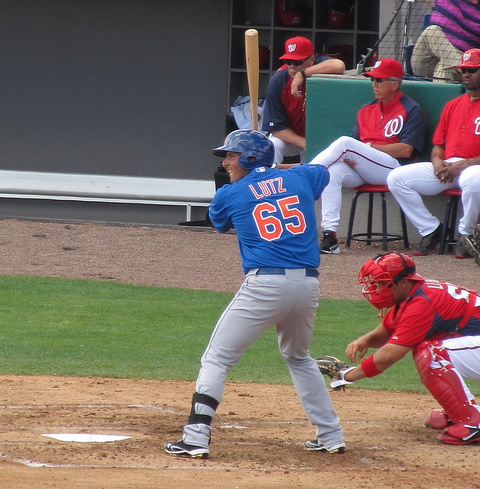 The final and best choice in my opinion is the 26-year-old Lutz. Felled by myriad injuries throughout his six-year professional career — many of the freak variety — the Reading, Pennsylvania native has long awaited a shot to prove his powerful bat at the major league level and if this isn't the right time I don't know what is. The corner infielder features a solid glove at third but, more importantly, the kind of current overall offensive potential that the other four options -- including Turner -- just cannot match.

Namely, that means in his last three seasons for Triple-A Buffalo he's posted an outstanding .298/.395/.504 triple slash. Despite strikeout rates in the neighborhood of 25% he's also walked in upwards of 12% of his plate appearances over that time. Despite some inevitable regression at the major league level, the Minor League Equivalency translation of those numbers would peg Lutz for a .254 average, 17 home runs, and a .752 OPS in 500 at bats at the major league level. For reference, the average major league third baseman hit .266 with a .754 OPS in 2012. Obviously the club isn't looking for 500 at bats from Lutz; however that level of projection along with the fact that he's already on the 40-man roster makes this an easy decision in my view, regardless of the condition of Turner's ankle.