2013: Another Bump On The Mets' Long Rebuilding Road

Mets fans have had to adjust as the Mets have changed their ways and worked on rebuilding over the past few seasons.

Share All sharing options for: 2013: Another Bump On The Mets' Long Rebuilding Road

There was a time when the Mets would spend to contend with a fruit fly’s sense of the future. Many major league teams did this in the late 1990s and early 2000s, but the Mets held on to this way of doing business longer than any other — the Dodgers’ retro spending spree notwithstanding. In the past five years and change, as the Mets’ fortunes took a turn for the worse, fans haven’t suffered so much as they’ve dealt with the dull ache and muddled vision of a hangover.

At first, the team’s front office tried to cure this ailment with hair of the dog, thinking more pricey free agents would placate fans regardless of the wisdom of those signings in terms of years, dollars, or personality. Hi, K-Rod. Come on down, Jason Bay. Then Bernie Madoff intervened. From then on, it was taking the pledge and going cold turkey.

The local media has often tried to sell the idea that it’s impossible for any New York team to rebuild, because the city demands winning NOW and FOREVER, or something. New York Media Types like to say things like this because it reassures them they have the very difficult and very important job of voicing the frustrations of angry partisans. Meanwhile, in the real world, it appears Mets fans have resigned themselves to the fact that a return to sustained respectability requires a trip down a long and bumpy road.

When a team deals the reigning Cy Young Award winner, as the Mets did this past winter, fans are supposed to storm the castle with pitchforks and torches. Instead, for the most part, fans seemed to understand the pure baseball reasons for selling high on R.A. Dickey and getting back a bushel of talent in return. It’s unclear to me whether this reflects an actual sea change in the average fan’s notion of how perennial success is built, or just battle fatigue from losing Jose Reyes, but here we are nonetheless. I should also note my assessment comes from my own ghettoized survey of fandom via the Internet and conversations with other guys on my block in Queens. Your Internet and local guys may differ.

The 2013 Mets are in a unique position. The bar has been set so low for them that there’s very little chance they don’t clear it. And on the odd chance they trip and fall over that bar, its still can’t be considered a disappointment. When nothing is expected of you, nothing can look pretty good.

On the mound, the 10-start glimpse of Matt Harvey in 2012 was intriguing enough to suggest big things could be in store for him, this year and beyond. The Blue Jays reportedly thought enough of lefty Jonathon Niese to offer the same package for him as they did for Dickey. His incremental progress the last few seasons shows that might not be as crazy an assessment as it appears at first blush. Dillon Gee has already attained the level of competence one expects from a number four starter, and might be better than that still. And they all could be joined by phenom Zack Wheeler before the All Star Break. For the first time in forever, the Mets’ starting rotation will both be good and have upside at the same time.

As for the offense, the real Ike Davis is probably closer to his torrid second half of 2012 than his torpid first half. Newly minted Met-for-life David Wright will be David Wright. For all the great weeping and gnashing of teeth about WORST. OUTFIELD. EVER, the infield looks to be a solid offensive unit with Ruben Tejada and Daniel Murphy up the middle. It’s not too bad defensively, either, provided you close your eyes to Murphy more often than not. This crew may receive its own addition midseason, if catching prospect Travis d’Arnaud — the centerpiece of the Dickey trade — slugs his way to the bigs as expected.

In emphasizing the good, there’s a lot left unsaid. There is that outfield, after all. Yup, there it sits. A team of the Mets’ limited short-term horizons probably shouldn’t commit several years to Michael Bourn and lose the number 11 pick overall in the process, or trade farmhands for Justin Upton. The defensibility of these non-moves doesn’t make the sorry state of what they do have any better, though.

There’s a slim chance that one of the Mets’ many young-ish options comes out of nowhere and surprises everyone, in the same way that it’s technically possible for objects to fall upwards or for time to run backwards. Theoretical physics says it can happen. Reality says don’t hold your breath waiting to see it.

If you took the best parts of Mike Baxter, Kirk Nieuwenhuis, Jordany Valdespin, and Matt Den Dekker, you might be able to frankenstein them into one good outfielder. Until that technology exists, this quartet will probably cycle through the positions with limited results. The outfield’s biggest potential offensive contributor, Lucas Duda, tops out at the Jason Kubel level. Which is, in layman’s terms, not good. And that’s before considering his scary level of defensive play, which will not be seen in any highlight clips any time soon, unless MLB starts a cross promotion with Faces Of Death. 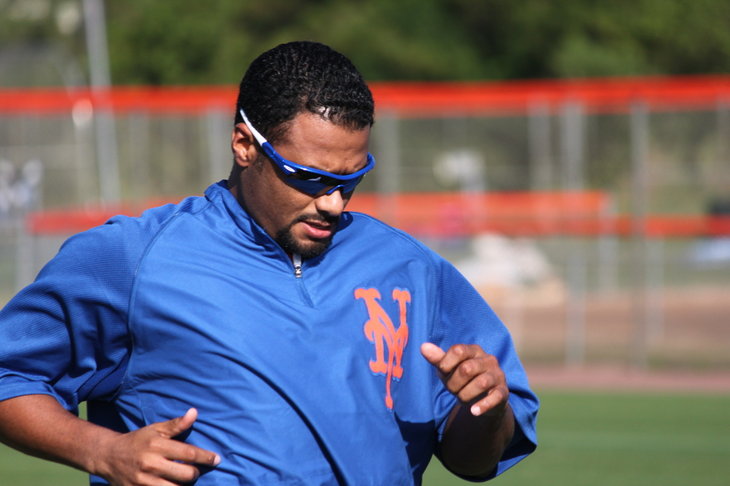 Santana shouldn't be unhappy with the Mets.

It felt strange to write of the pitching situation and not mention Johan Santana, and at the same time it felt not strange at all. Johan is not healthy, per usual, and probably never will be again. Management has also decided to pick a fight with him for some reason, perhaps because he’d feel left out if they didn’t do this to him the same way they did it for other Mets in the last years of their contracts. See Dickey and Carlos Beltran for other examples of players who received front office grief as going-away presents.

The sort-of good news is at least Santana’s ailing now instead of going down in August, as is his wont. The bad news is the options to replace him in the rotation, beyond Wheeler, are not pretty. The extra bad news is that Shaun Marcum, one of the team’s few offseason signings, doesn’t have a stellar attendance record, either. That means a potentially great starting corps could turn real ordinary real fast.

Meanwhile, the bullpen is interesting in the least comforting sense of the word. It contains the kind of characters bullpens tend to have on teams like these: reclamation projects (Pedro Feliciano), bargain bin finds (Brandon Lyon), and last-chancers (LaTroy Hawkins), sprinkled amongst hard-throwing whippersnappers (Bobby Parnell), some of whom have yet to figure things out and may never do so (Count Jennry Mejia, and Jeurys Familia in this camp.).

So no, the Mets are unlikely to be very good this year. But they are also likely to see some major steps forward from players who will part of the next good Mets team. If this season offers no more than that, I think a plurality of Mets fans will be okay with it. Not enough to actually go to Citi Field, probably. Just not BURN IT DOWN mad.

Granted, being okay with continued rebuilding is predicated on the assumption that once the Mets’ prospects bloom and the big contracts of Santana and Bay are off the books, the team will spend again. This may be a big assumption, based on the murky state of the Wilpons’ finances. The owners say they’re back in the black, but continuing to associate yourself with Ponzi schemes is not the best way to demonstrate fiscal solvency. If 2014 rolls around and the implied spending does not materialize, well, then pass us the hard stuff again, please.