This Week in Baseball Season One Recaps: Episode 12

TWIB '77 speeds into episode 12 as the A's get a eulogy, Herman Franks loses it, and proto-Jeffrey Maiers emerge.

Share All sharing options for: This Week in Baseball Season One Recaps: Episode 12

Episode 12 of This Week in Baseball (cover the week ending August 16. 1977) starts with a feature on the Texas Rangers, who, in the words of Mel Allen, have been "charging hard and challenging all" since the All Star break, asserting themselves in a crowded AL West. Their rise is demonstrated by the kinds of diving, dirt-filled plays that TWIB favors. Allen also notes that the Rangers lead the league in ERA, though at this point he doesn't mention the name of a single Rangers pitcher who's contributing to this feat. (Not even future Hall of Famers Gaylord Perry and Bert Blyleven.) But hey, doesn't this look like a man who'd help his team lead the league in ERA? I mean, when not asking you about your insurance needs. 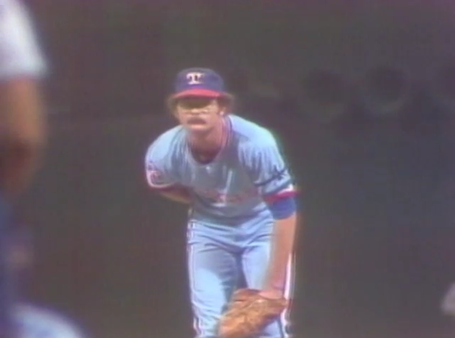 In recent showdowns with the first place White Sox, the Rangers took 6 of 8, leading a petulant Comiskey Park scoreboard to explode in protest. But things are really rocking back home in Arlington, where a Ken Smith homer is celebrated by some plucky guy (or gal maybe?) jumping on top of the fence and just standing there like a tightrope walker. No leaping to your death for these Texans. They even celebrate with an old timey Dixieland brass band, in the grand Texas tradition. The fans are so keyed up they don't seem to notice the creeping influence of the metric system on their ballpark. "It figures to be some kinda shootout in the weeks to come in the wild wild west!" Allen cautions us. Thank you for the heads up, Mel. After all, in Texas the word "shootout" should be taken in the extremely literal sense.

Next, Allen informs us that the first place Red Sox "expect to draw 2 million fans in the smallest ballpark in the major leagues!" Don't mention the size of the ballpark, Mel. You're liable to give them a complex and the next thing you know they're building seats on top of the Green Monster. But before the Sox can make an overcompensating Camaro purchase, we see George Scott, Butch Hobson, and Dwight Evans belt back-to-back-to-back dingers against the Mariners. We also get a shot of that bygone mode of transportation, the bullpen cart, which is just sitting on the outfield warning track for some reason. Pretty sure it's illegal to move fielders around with that thing. 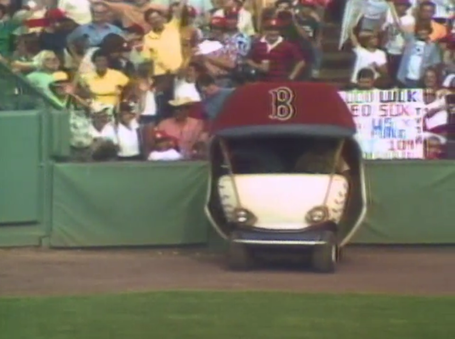 While noting Boston's continued hot streak (victorious in 15 of their last 16), for the second time in this series Mel refers to them as the "Red Sockers," an appellation I have never heard anywhere else. Seriously, it makes me really uncomfortable, Mel.

Meanwhile in Oakland, Allen tells us that "1977 has been a season of hard knocks for Vida Blue and the A’s." This is notable because it is the first remotely negative comment ever heard on TWIB. Keep in mind we've already seen segments on the expansion Blue Jays and Mariners, and dreadful teams like the Padres, Mets, and Expos. However, there is something extra sad about the A's, recent winners of three straight titles who now find themselves 23 games out of first and bereft of most of the homegrown talent that propelled them to greatness in the early part of the decade.

Per usual, TWIB tries to accentuate the positive by showing us Manny Sanguillen plating the winning run in a win over the Orioles, which snapped Oakland's 14-game losing streak. In the Hope For The Future department, TWIB points us in the direction of Larry Murray, who has upside because he can (wait for it) steal bases. We also see Rob Picciolo, "a smooth fielding shortstop who wants to improve his hitting!" Why stop the condescension there, Mel? Throw a "Hang in there, slugger!" at the end for good measure.

A's fans without much else to cheer for were treated to the sight of Mitchell Page stealing his 26th base in a row, setting an AL record. He's so excited to achieve this feat, his helmet and cap fly off in the effort, revealing a weird visor thingy underneath it all. It takes a hardy man to handle that much headgear. 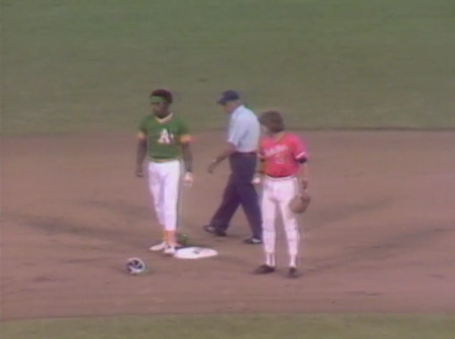 After showing us Page's record-setting steal, TWIB looks back at great the A’s teams of early 70s--"a team of storm and turmoil, but a great team, a team that will be remembered always." A wistful, languid montage follows, scored by 70s soft-focus instrumental music, with Allen intoning the names of bygone A's greats as if reading through an "In Memoriam" segment. This TWIB portion is uncomfortably and inappropriately morbid--after all, the A's are merely bad, not dead--but it gets especially weird when we see A's owner Charley Finley and manager DIck Williams celebrate another World Series victory by making out with their wives on a dugout roof. 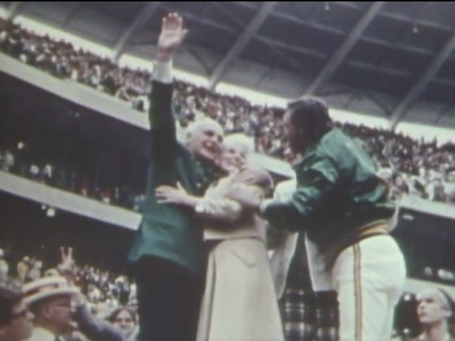 After a break, we're treated to a team that isn't at death's door. "In the National League East, the Phillies are on fire," Allen shares. "While they’ve been pumping, the Cubs have been slumping." The Phils just took 4 straight from Cubs at Wrigley to further compound Chicago's midsummer swoon. Steve Carlton wins his 17th game in the opener, while "his own personal catcher" Tim McCarver belts two homers during series. In case you're wondering, a McCarver home run trot pretty much looks like what you think it looks like. Upon leaving Chicago, the Phils have won 12 in a row and now command a 3.5 game lead in the NL East.

Of course, the Phils aren't completely without worries. During the Cubs series, centerfielder Garry Maddox makes a great running catch but runs into Wrigley's brick wall at full speed, then immediately clutches his shoulder as he crumples to the ground. Turns out Maddox has separated his shoulder and, according to Allen, is "expected to miss at least 3 weeks of action." I'm no doctor, but that seems like way too quick a recovery for a separated shoulder. I just hope this diagnose wasn't made by the various Phillies players who stand around Maddox after his injury like dads on a driveway, gawking under the hood of a troublesome Chevy. 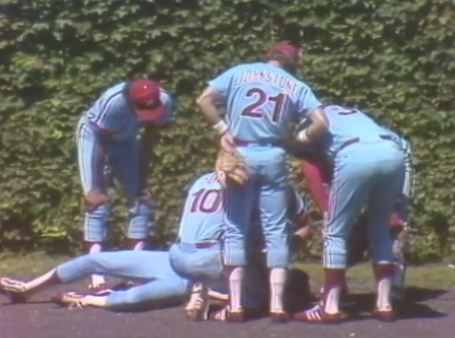 The Cubs, meanwhile, are reeling. Right before and after their tilts against the Phils, Chicago has two equally frustrating series against the Pirates. Their struggles are perfectly demonstrated by a great clip of Bobby Murcer caught looking for strike three on a borderline call. Murcer scratches his chin in mock-befuddlement, then removes his helmet by shaking it off his head, and finally flicks his bat away in the most dismissive manner possible. "Hang in there, Bobby!" Allen counsels. 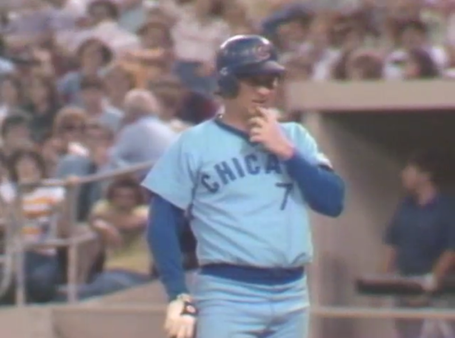 TWIB doesn't linger on the Cubs' struggles for long, preferring to focus on the resurgent Pirates. "If the lumber doesn’t frighten ya, the lightning will strike ya!" Allen warns, channeling his inner WWF manager. "With the Phillies and Pirates winning like this, Pennsylvania is aflame with pennant fever!"

Then, a brief feature on the high flying Dodgers, who have all but left their competition in the dust in more ways but one. They stand 11 games in first, while the team is also "on its way to a major league attendance record of 3 million fans!" LA took their opener from Reds on shutout by Tommy John, "who’s recovering nicely from arm surgery." Well, it was a revolutionary surgical procedure never before attempted on a human being that would go on to change the game forever, so way to undersell it, Mel. Dodgers win another game against the Reds 1-0 when Davey Lopes somehow escapes a rundown, then scores on a Reggie Smith single. "When it’s your year, you win like this," Allen informs us.

After a break, this week's "weird plays" segments starts with the non sequitir shot of a motorcycle on a high wire, dangling a lady on a trapeze beneath it. No explanation is given for this scene, but at least it's not as creepy as the unexplained "clown on the basepaths" incident from a few weeks prior.

The first weird clip shows Cubs skipper Herman Franks losing his cool in Chicago. No doubt frustrated at the Cubbies' reversal of fortune, he opens a meaningful dialogue with the umpires by throwing a bunch of equipment on the field. An unnamed Cub takes it upon himself to clean up Franks' mess. 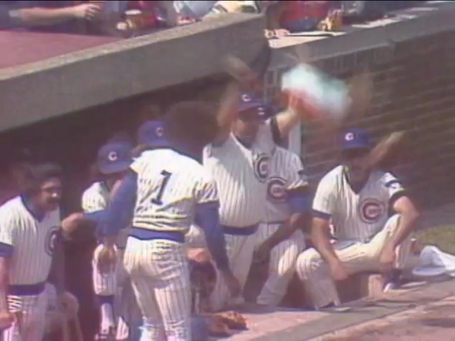 Down in Texas, two White Sox fielders pursue a foul ball down the third base line. Their efforts are thwarted when a fan leans WAY out over the railing and onto the field to catch the ball before the White Sox can get to it. All the fielders can do is stare back at him in amazement, while a dude in an orange shirt cheers his proto-Jeffrey Maier realness. 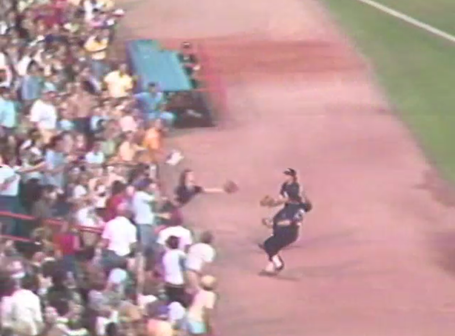 Meanwhile, Odell Jones of Pirates is having a rough day. First, he goes into his windup and stumbles back off mound. Then, his next pitch is nowhere near the plate. Even Allen gets in on the act. "Wow! That one’s into the next century!" I'll let you decide how crazy this is. In the pic below, that white blur against the black camera screen is the ball. It's so far outside, it doesn't even attempt this Mets batter. 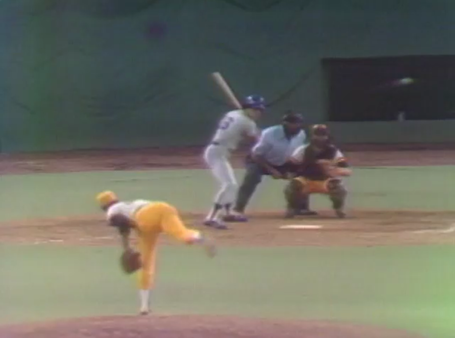 TWIB eschews a collection of good plays this week to skip straight to the Gillette Special, which is awarded to Reggie Jackson. "Reggie's getting into one of those grooves," Allen cautions the rest of the league. We know he's in a groove because we see him throw out two players at the plate in two days. Oh, and he's also driven in 19 runs in his last 10 games to help the Yankees keep pace with Boston. In the pricey seats, Jackson is greeted with triumphant signs of REG-GIE. When Reggie blasts a homer into the upper deck, however, there's not many there to greet it, save for this happy crew. 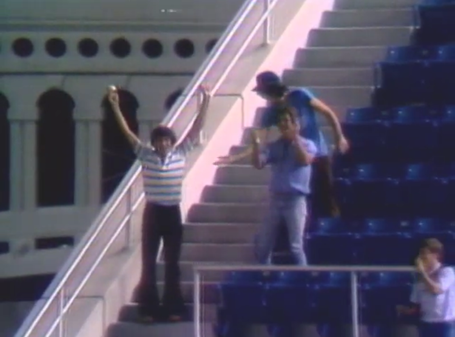 Episode 12 closes out with a brief segment on the class of 1977 Hall of Fame inductees. The most notable new member is Ernie Banks, who flashes a smile from the dais and repeats his famous "let’s play two" line. TWIB is so overwhelmed with nostalgia that they forget to lay down the usual music track over the ending credits, and they roll along in uncomfortable silence. Not as uncomfortable as the Charley Finley-Dick Williams dugout scene above, but that's a high bar to vault. 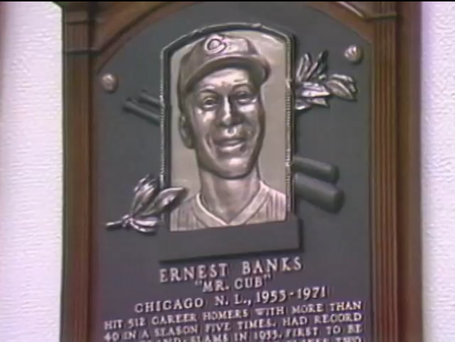