The Mets' bullpen was terrible last year, but what might we expect from it this year?

Share All sharing options for: What do the Mets have in the 2013 bullpen so far?

Over the past few weeks, we’ve been looking at the Mets’ spring training roster and trying to guess which players will eventually make the Opening Day roster. While there’s plenty of room to speculate about the last couple of spots in the team’s bullpen, there are five pitchers who look like they’re going to be on the team on April 1: Bobby Parnell, Brandon Lyon, Scott Atchison, Josh Edgin, and Greg Burke.

With Frank Francisco slowly working his way back towards a potential return, that leaves a couple of spots up for grabs among the following pitchers: Robert Carson, Jeurys Familia, Pedro Feliciano, LaTroy Hawkins, Aaron Laffey, Jenrry Mejia, and Scott Rice. And keeping in mind that Jeremy Hefner will begin the year in the rotation in Johan Santana’s place, it’s possible that the Mets will need to drop a couple of pitchers from the bullpen if Santana and Francisco manage to get healthy at the same time.

For now, though, let’s take a look at how four of the pitchers from the first group compared to the major league average for relief pitchers over the past three years. Burke hasn’t pitched in the big leagues since 2009, and it’s important to remember that Edgin has just 25.2 innings under his belt thus far. 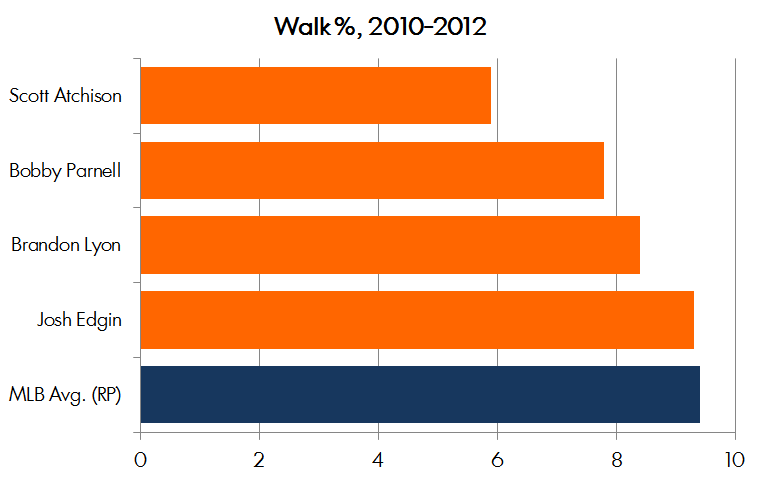 So we’ve found a strength of the core of the Mets’ 2013 bullpen: limiting walks. Edgin’s walk rate is virtually equivalent to the league average, but Lyon, Parnell, and especially Atchison find their success in limiting the free pass. 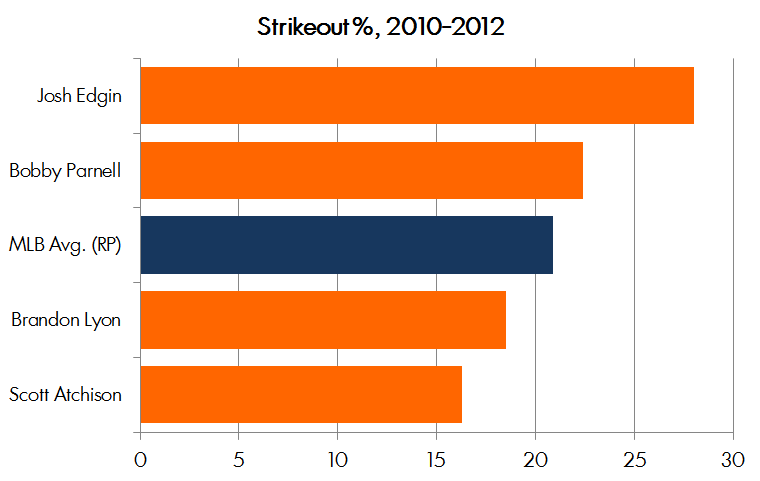 In terms of strikeouts, it’s more of a mixed bag. Edgin’s strikeout rate was downright elite, though he’ll have to maintain it for a lot longer to prove it’s sustainable. Parnell, however, has about as long a track record as a relief pitcher can have over three seasons, and his strikeout rate has held up. He’s been the Mets’ best relief pitcher for a while and will finally get a shot at closing games.

Lyon, meanwhile, has been below average overall, though his strikeout rate jumped considerably in 2012, likely because he threw his curveball more often in two-strike counts. And Atchison, though successful, simply isn’t a high-strikeout pitcher. 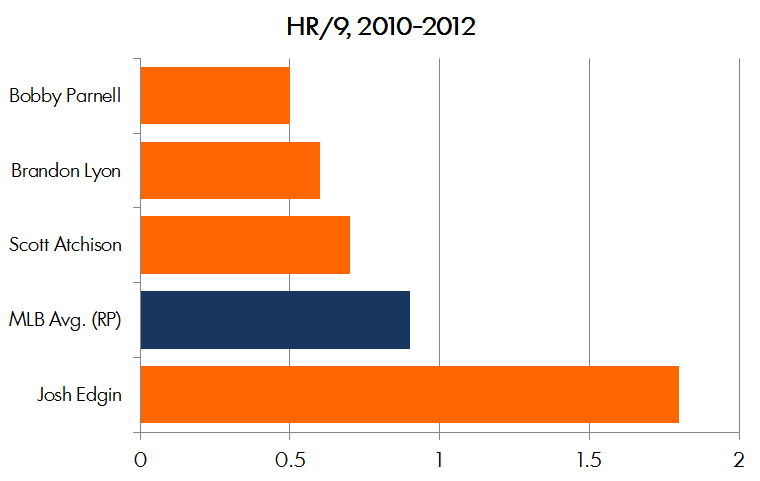 Clearly Edgin’s main fault in his brief stint in the big leagues last year was his propensity to give up the home run, but it’s been a plus for each of the other three pitchers.

Walks, strikeouts, and home runs are the three components of FIP (Fielding Independent Pitching), and it’s a good for the Mets that they have a few relief pitchers whose rates in those categories compare favorably to other big league relief pitchers. Greg Burke’s been excellent in Grapefruit League play, but he’s a wild card come the regular season since he’s a recent convert to a semi-sidearm delivery and hasn’t pitched in the big leagues in any capacity in quite a while.

Last year, just two of the ten Mets relief pitchers who threw at least 20 innings posted a FIP below the league average of 3.79: Parnell and Tim Byrdak. The track record says they're very likely to have three such pitchers among this group. If Edgin gets his home run rate under control, his strikeouts and walks suggest he could join them.

Among the rest of the pitchers trying to make the team, only a couple have recent big league experience. Laffey hasn't been very good over the last three years, but Hawkins, believe it or not, has a 3.62 FIP over that time. That's slightly better than league average and an encouraging sign if he ends up making the team.

The Mets' outfield and bullpen were major weaknesses last season, but three-to-four above-average relief arms would make the Mets very unlikely to wind up with the baseball's worst bullpen. Anything more than that would be a significant bonus.