Should the Mets consider re-upping a player who was productive for them in 2012?

Share All sharing options for: Cardinals cut Cedeno; should Mets circle back?

As first reported by Derrick Goold of the St. Louis Post-Dispatch, the Cardinals surprisingly cut Ronny Cedeno from their camp in Jupiter earlier today:

Ronny Cedeno gets his release. #stlcards

I say surprisingly because the ink was barely dry on a one-year, $1.15 million contract that the two parties signed at the end of January. In fact, with some performance bonuses, the 30-year-old shortstop could have made up to $2 million. Additionally, Mets fans remember Cedeno from his 2012 season in orange and blue in which he posted a 0.6 WAR in just 78 games, spelling the injured Ruben Tejada admirably. So what happened?

The Cardinals' starting shortstop Rafael Furcal underwent Tommy John surgery, for one. But that seems to push the needle in the other direction. So what else happened?

Apparently there was trouble in paradise even before the pact was made official. For one, a little-known fact about the deal is that it was actually what is known as a "split contract" with major and minor league salaries built in. Among other things, it meant that that money was not guaranteed. So obviously the Cardinals were not enamored with Cedeno.

To double down on that last sentiment, Cardinals general manager Jon Mozeliak went all "Sandy on the outfield" by responding to a question about how Cedeno — who was batting .290 with a .791 OPS on the spring at the time of release — was looking this spring by saying, "Um, not great."

The Cardinals' MLB.com beat writer Jenifer Langosch, who previously covered the Pirates during the Cedeno years, seemed to underscore the club's lack of enthusiasm for the infielder first upon the deal's announcement:

You probably don't want to hear my assessment of Cedeno, as someone who watched him play every day for 2 1/2 yrs in Pittsburgh

And then throughout spring:

Again, this all may seem odd to Mets fans who watched Cedeno perform well, nay, very well on both sides of the ball last season. Meanwhile, the idea of a poor work ethic or shaky defensive skillset never entered the equation. That is not to say that either the Cardinals or Langosch are wrong; hell, they've seen a lot more of him than any Mets fan has.

However, as even the most cursory knowledge of the game will inform you, players can improve. Especially a player in the midst of his athletic prime. So for that reason, should the Mets re-visit the idea of signing Cedeno to reprise the role he filled so well last year as the club's backup middle infielder? 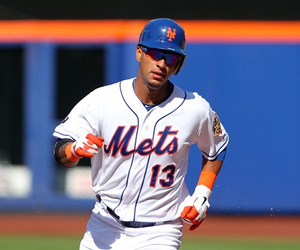 Messy business with the Cardinals aside, there isn't a ton standing in the way, granted that the infielder has backed off of the idea that he's a major league starting shortstop. It may be a bad assumption, but losing a position battle against some conglomerate of Pete Kozma, Daniel Descalso, and Ryan Jackson may have cooled that demand. So the question is, if he were brought in as a candidate to represent Tejada's central understudy, can he win this one against Brandon Hicks, Brian Bixler, and Omar Quintanilla?

Brandon Hicks is currently batting .121 this spring with strikeouts in over half of his at bats, not to mention a handful of errors at third and short. Somehow, he was worse in the brief time he's spent in the majors.

Brian Bixler has hit much more this spring (.296/.424/.593), but the journeyman infielder is already up to five errors. Further, a lifetime .189 average over four major league seasons has to mean a lot more to the Mets brass than a gaudy March. Additionally, his highest career WAR was a 0.1 mark last season for the Astros.

Omar Quintanilla played a reserve to the reserve role in 2012, spelling Cedeno when he, too, went down with a strained calf. In 29 games for the Mets Quintanilla batted .257 while capably manning short. For that reason there's a case to be made that the Mets might be better off sticking with the 31-year-old, who is only in camp on a minor league deal. Cedeno would likely cost about the same $1.1 million they paid him last season. In seven big league seasons, however, Quintanilla's high-water mark is 0.3 WAR, accomplished last season between the Mets and the Orioles.

It's pretty clear that, could the Mets coax him back, Cedeno is the best readily available option. Early in the offseason there were reports that multiple teams coveted the Venezuelan shortstop; yet this late in the game many rosters are all but set. All that's left is a discussion about dollars and cents. Is a million-plus dollars for a 30-year-old backup infielder the best use of limited resources? Probably not. However, Sandy Alderson made it clear early in the offseason that the coffers were not bare, and for reasons not entirely in his control the money went unspent.

So why not sign Cedeno? There's not much standing in the way.