According to sources, when R.A. Dickey was traded, Noah Syndergaard and Anthony Gose were both expendable, in addition to Travis d'Arnaud. The Mets chose d'Arnaud and Syndergaard, but did they make the right choice with the latter? Would Anthony Gose have been a better choice, assuming everything else about the deal stayed static?

Share All sharing options for: Revisiting The R.A. Dickey Trade: Gose or Syndergaard?

While the days leading up the R.A. Dickey trade were tense, the hours leading up the deal actually being struck were unbearable. Actual scoops and statements from anonymous sources were flying fast and furious, forming a discordant symphony of truths, lies, half-truths, and outright BS.

The Mets were "sending top flight talent to Toronto in addition to R.A. Dickey." The players the Mets would be getting back were "major league ready." Looking back at the MLBTradeRumors archive of the trade, up was down, down was up, left was right, and right was left.

The truth eventually coalesced, and reports came out that the Mets would receive top prospects Travis d'Arnaud and Noah Syndergaard, in addition to veteran catcher John Buck and wildcard throw-in Wuilmer Becerra. For this package, the Mets would be giving up Dickey and catchers Josh Thole and Mike Nickeas. All in all, a coup when you disregard the fact that R.A. Dickey would be trading in his blue and orange for blue and white.

Anthony Gose, top Toronto outfield prospect, was heavily involved in many of the rumors. Ultimately, we know that he wasn't included in the trade package, and that it was Syndergaard who was the other top-flight talent packaged with d'Arnaud, but at one point, according to Andy Martino, the Blue Jays were willing to give up the young catcher and Gose. This brings us to the crux of this little thought experiment: would you have rather had a package of d'Arnaud and Gose, rather than d'Arnaud and Syndergaard, assuming everything else stayed static?

Who is Noah Syndergaard? 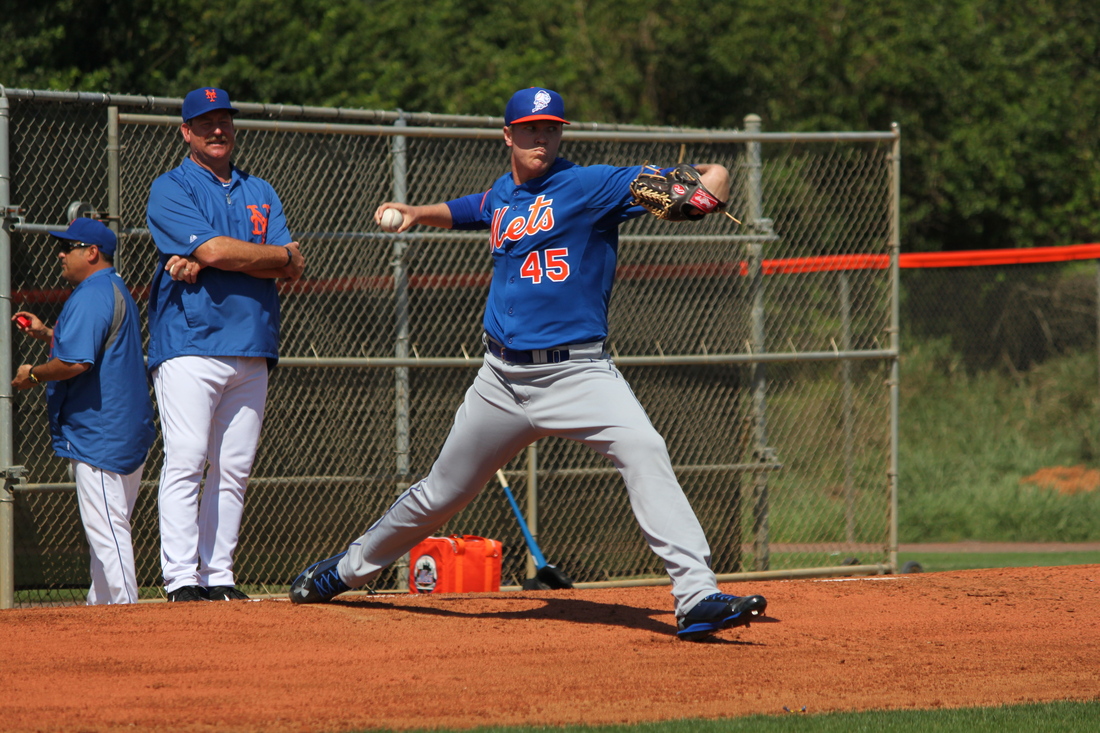 A big-time Texan with a big-time name, Noah Syndergaard has a live arm and a strong arsenal of complementary pitches.He was drafted out of high school by the Toronto Blue Jays, using their second supplemental draft pick in the first round, making him the 38th overall pick of the draft itself. John Sickels graded the 20-year-old righty a B+ in 2012, an A- in 2013, and considers him the 12th-best pitching prospect in baseball, making him 20th to 25th best prospect in the minor leagues right now. Baseball Prospectus considers him the 28th best prospect in the minor leagues, while MLB.com considers him the 29th, Fangraphs the 46th, and Baseball America the 54th.

His numbers speak for themselves. In his first full season, 2012, he pitched 103.2 innings with a 2.60 ERA and 2.21 FIP, with 122 strikeouts (10.6 K/9) and 31 unintentional walks (2.7 BB/9), resulting in an impressive 3.94 K/BB ratio. In an interview with Toby Hyde, Syndergaard revealed that the Blue Jays taught him a slider midseason, which not only gave him another pitch in his arsenal, but also had the side effect of greatly improving his curveball, a pitch that many scouts doubted and considered one of his few weaknesses.

Who is Anthony Gose? 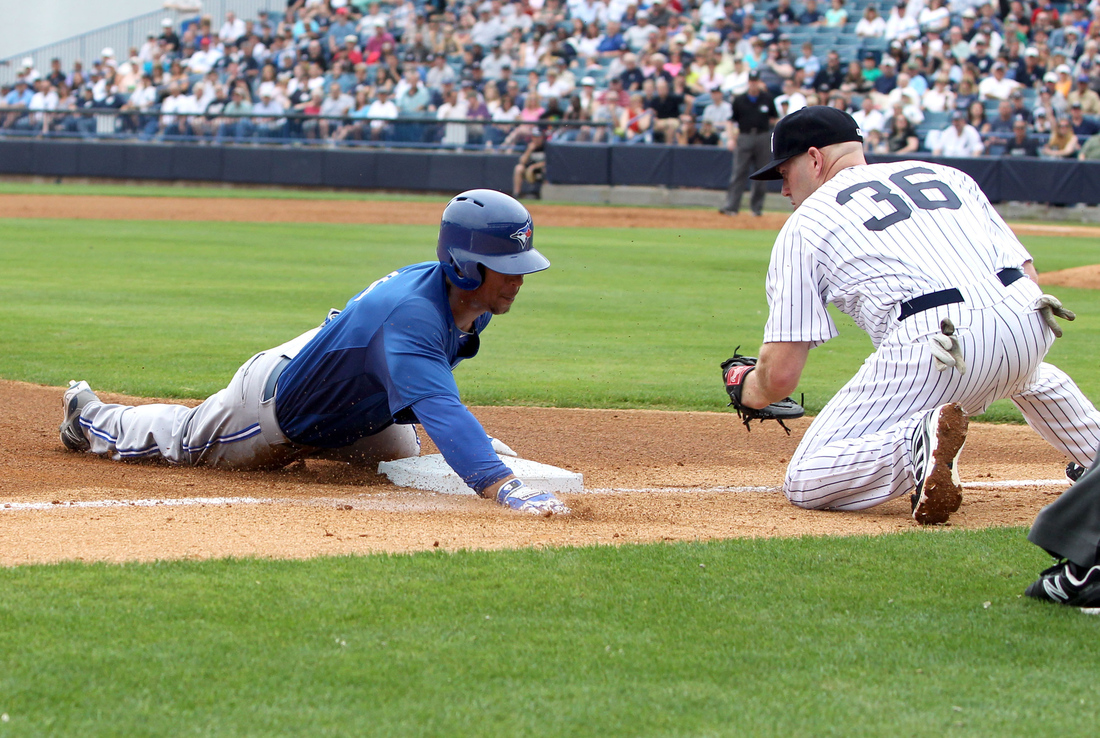 California native Anthony Gose was drafted out of high school in 2008, selected by the Philadelphia Phillies with their second overall pick, and the 51st pick overall. John Sickels last graded the speedy 22-year-old outfielder a B+ prospect, making him the 51st best prospect in 2012. Fangraphs ranked him 36th, while Baseball America considered him the 39th, MLB.com the 57th, and Baseball Prospectus the 68th.

Over five seasons in the minor leagues, Gose is a .264/.341/.393 hitter and a prolific base stealer, with 228 successful steals under his belt. In 2012, when outfielder Jose Bautista went down for the season, the Blue Jays promoted their top outfield prospect to the big league club.

In 166 at-bats, he hit .233/.303/.319 with 15 stolen bases in 18 chances with good defense in center field and slightly subpar defense in right field in an extremely small sample size. So far this spring, Gose is hitting .385/.484/.577 in 26 at-bats with 5 steals in 6 attempts against competition that Baseball-Reference has graded 8.5, which is slightly better than Triple-A quality, but slightly below MLB.

The case for Syndergaard over Gose

Syndergaard has "future ace" written all over him. Anthony Gose's future is a lot less certain. Nobody doubts that his glove and speed will translate to the big leagues. His hit tool, though? Not so much.

At worst, Syndergaard projects to be a capable reliever. Gose, however, could be a fourth outfielder — a defensive replacement, a pinch runner. Which is more valuable?

The case for Gose over Syndergaard

TINSTAAPP: There is no such thing as a pitching prospect.

His mechanics are clean enough, and Syndergaard has had no previous injury concerns, but one little misstep could always end in amputation. Hyperbole?

Marlon Byrd almost had his leg amputated after kicking a door while horsing around with a group of friends in college; it set in motion a chain of maladies — blood circulation problems, muscle damage, nerve damage, infection — to the point that amputation was considered by his doctors. The odds that the pitching prospect needs a limb amputated is slim, but the threat of injury derailing a career is always present for athletes, and doubly so for pitchers.

In addition, while there are a lot of flaws with the Mets' farm system as it exists right now, the organization does not lack pitching at its lower levels. Looking at the Amazin' Avenue top 50 prospects, there is no shortage of intriguing arms. While Syndergaard might have the highest upside of them all, plenty have the tools to become relevant major leaguers with upside.

On the flip side, the team's minor league is all but devoid of impact position players, specifically outfielders. Matt den Dekker represents the closest thing the system has to offer, but he is a flawed player. Bats with upside exist but are years away. Anthony Gose fill numerous holes the team has right now and possibly for a couple of years to come: a lead-off hitter, a stolen base threat, a plus glove in the outfield, and the type of hitter that spacious Citi Field would help as opposed to hinder.

And the winner is

Ultimately, neither player is chopped liver. There is no right or wrong answer, since it all depends on what qualities in the individual players and outside factors you value more. Both are skilled players who would be slotted in atop the Mets' best prospects either way.

As for me, well, I'd rather have: Syndergaard over Gose. (highlight to reveal).