Johan Santana is entering year six of his Mets career, and a lot of things would seem better were he pitching.

A little more than five years ago, the Mets traded for Johan Santana. If you're unsure how long ago that should feel, remember that about 24 hours after the Mets and Twins completed the deal, David Tyree caught a football on and with and against his helmet, and the Giants defeated the Patriots in Super Bowl XLII. There were still 16 teams in the National League, no one was talking about a second Wild Card, and Barry Bonds had just led the majors in on-base percentage.

The 2008 Knicks were running out exactly zero players still on the team today. Same goes for the then-New Jersey Nets. And about half of the 2008 Mets are out of baseball now — not as in "with other teams, in the minors, or independent ball," but plain ol' out of baseball entirely.* Five years might as well be a century in the transient world of pro sports, and Santana is accordingly now the second-longest tenured Met.

*Making the half-life of an Omar Minaya team about five years. Within another decade, the inert remains of his Mets teams will have all decayed enough to be safely buried under a mountain outside of Las Vegas.

Still looking back five years, we find the last — in the words of Steve Somers — serious September baseball game the New York Metropolitans played. And then we go back one day more to find the last serious September baseball game the Mets won: Santana’s three-hit shutout that pulled New York into a tie for the Wild Card on the season’s penultimate day. In what will likely go down as Santana's best (or second-best) moment in New York, he teased a swing-from-the-heels Marlins team with a flurry of half-time pitches, a display of pitching that seemed almost more impressive mentally than physically. It was certainly the greatest baseball game I ever watched on a small TV in my dorm room while being mocked by roommates for my repeated fist pumps.

That game was the second-to-last important game the Mets have played, but it was also the second-to-last September game Johan Santana has started. He made one more start, a five-inning outing on September 2, 2010. And that’s been it. His seasons ended early in 2009 and 2010, he missed all of 2011, and he was shut down a third time in 2012. Since September 2008, we’ve had more presidential elections than September Santana starts. His body just hasn't held under the stresses of six-months-plus-spring-training baseball seasons.

He's been the lost man of this Mets camp.

Now it’s starting to seem as though Santana may never be whole again. He was selectively brilliant for parts of 2012 before his body came apart in vague, Mets-pitcher-injury ways. He’s still not back together again. He hasn’t pitched an inning this spring, and despite the Mets only Thursday ceasing to pretend he might be ready for Opening Day, even a debut in April seems optimistic. Santana has instead spent this spring playing media-telephone with the front office — which is fun only for the telephone — and then disappearing into whatever fog consumes all not-quite-rehabbing, not-quite-throwing pitchers. He's been the lost man of this Mets camp.

And this is sad. It’s sad because the Mets are better with a healthy Johan Santana in the spotlight, and baseball is better with a healthy Johan Santana in the spotlight. For the franchise that's had Seaver, Koosman, Matlack, Gooden, Cone, Leiter, and Dickey take the mound, Santana still sits third among Mets starters in adjusted ERA. He's also the only one to throw a no-hitter with the team. But it's a discredit to Santana to just rattle off numbers, because his brilliance goes beyond statistical benchmarks. He’s a sublime pitcher. He’s cool the way movie characters are cool, cool like he seems to never be out of chewing gum cool. Santana's presence borders on unreal and he protrudes confidence in a way that suits only genius. 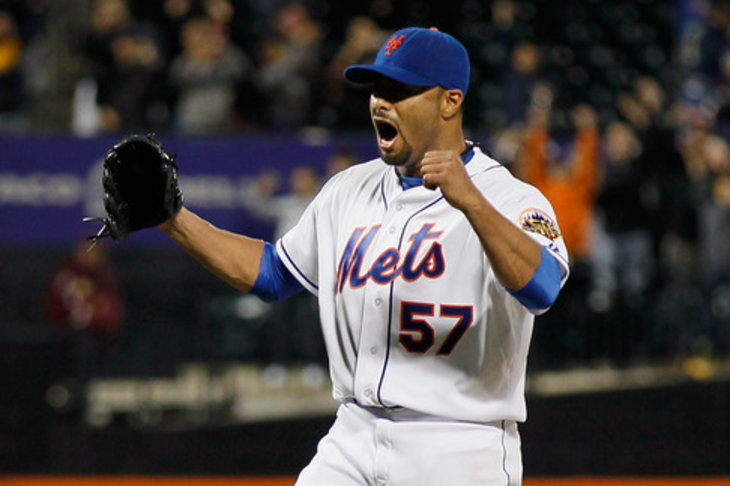 Is Johan Santana having a great season the worst case scenario for the Mets?

Because at his best Santana was genius. He didn’t throw remarkably hard by major league standards, his slider was just a junky waste pitch he only threw to lefties, and he always seemed to be fighting himself. He’s not unusual physically, maybe other than being broad shouldered. There are good reasons he was never a prospect and the Astros now-famously let a young Santana go in the Rule 5 draft. His gifts were never obvious because they were always hidden away in his mind. Santana’s brilliance was not only in reconciling his body and his will in the way all great control pitchers do, but in that his will was able to dominate the physical in ways that seemed, at times, almost supernatural. Like he could actually decide, after throwing a pitch, whether it was a fastball or a changeup. Or he could cause a popup to hang in the air just long enough for the shortstop to chase it down. Or he could not only manipulate most hitters, but actually control some. As in some poor slugger like Dan Uggla didn't even have a choice as whether to swing, he just swung or didn't swing because Santana made him. And I'm pretty sure Santana made Omir Santos hit that home run, too. Maybe not spoons or forks, but when Santana seemed to want it enough, he could bend baseball games with his mind.

But even Santana is ultimately limited by his body, and even he can apparently be slowed and halted by worn shoulders and elbows and knees and ankles. Maybe the saddest parts of watching great athletes grow old are the moments when their mental development, the lifetime bag of gathered tricks, can't compensate for the physical decline from age or injuries anymore. It's starting to seem as though Santana's hitting that wall with the endless injuries and rehabs. It's not that he can't do it on the field anymore; it's that he can't even get that far. I don't know whether his injury struggles are any more or less sad than that of a 22-year-old who blows his arm out and disappears — because I imagine the feeling of loss is similar for both pitchers — but Santana's decline is certainly less surprising to fans. Or at least it is in retrospect. I know I wasn't looking for it five years ago.

Not that I think Santana's quite done yet. But the Santana of old isn't coming back, at least not for a full season. It's sad to think about all that brilliance trapped in a breaking body. Even he seems sad now. A steady decline is what Mets faithful have watched during Johan Santana's tenure, imperfectly bookmarked by the Game 161 shutout and the franchise's first no-hitter. And though those two moments more than justify his five-going-on-six years with the team, and maybe make up his entire Mets legacy, may Santana shine through at least one more time. He doesn't belong in the background. Baseball, Mets baseball, is just better with him on the mound.