Today's starter Jeremy Hefner had to leave the game with no outs in the fourth after being hit by a hard liner off the bat of former Met Carlos Beltran. The ball took one bounce and struck Hefner's pitching elbow, at which point the pitcher knelt to the ground in pain (click image to embiggen): 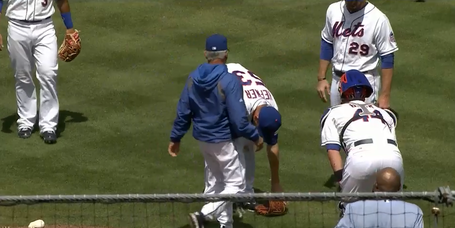 There has been no word yet about the nature of the injury. The latest update via the SNY broadcast relayed the message that Hefner was currently en route to the hospital for x-rays.

We'll keep you posted as this story unfolds. Any prolonged absence for Hefner could mean the Mets will be without yet another starting pitcher when the regular season opens on Monday against the Padres. Johan Santana will miss Opening Day and Shaun Marcum, originally slated to start the second game of the season on Wednesday, April 3, might not be ready either. The 27-year-old Hefner had already been penciled into the rotation in Santana's spot (if not his role), a nice opportunity for the righty which might go by the wayside.

UPDATE: According to the SNY broadcast, Hefner's x-rays have come back negative. The damage was limited to a contusion to his right elbow. On the surface this sounds like the Mets dodged a bullet; however, we'll continue to evaluate the situation as more information becomes available.