Quite a bit of ink has been spilt over 21-year-old Wilmer Flores' defensive home this spring. In fact, as part of Chris' outstanding interview of Mets Farm Director Paul DePodesta, we heard from the proverbial horse's mouth that the club intends to try Flores all over the field — especially second base — so as to prepare him for most any opening that may occur at the major league level.

If you've listened to the latest Amazin' Avenue Audio podcasts you've heard Jeff and I opine at length on the idea of Flores at second (Spoiler for those who — shame on you — haven't listened: Jeff's not a fan). However, to the surprise of many, Flores has actually looked quite capable at the position thus far in spring training.

Now the soft hands from a career shortstop aren't a surprise; however the nimble footwork around second base is. For all of the talk about lack of range from the 6'3", 190 lbs infielder, I don't know that enough thought has been given to the idea of his execution around the bag — something that represented perhaps the largest hurdle for Dan Murphy in his own second base re-education.

For a kid with over 450 professional games at short under his belt, there's likely going to be some amount of technique and comfort that will translate as Flores shifts to the other side of second base. This theory has already been pretty apparent as Flores has made a handful of nice plays this spring, including a very nimble exchange last Tuesday in executing a double play despite a wide throw from David Wright:

Now obviously a few solid games during spring training doesn't close the book on this discussion. Flores has still got a long way to go before he proves he's even Dan Murphy's equal at the keystone. Yet if Flores can reasonably prove he'll perform at or near that level of defensive proficiency that Murphy set as a baseline last season — perhaps replacing some of Murph's superior range with steadier hands/feet around the bag — Flores advanced bat will indeed allow for quite a valuable profile.

To answer your question, yes I am officially a broken record. I've decided to periodically re-visit my favorite pet project — that being Valdespin's perceived willingness to take more pitches — since I first broached the subject progress in winter ball (for the record, by periodic I mean on the hour, every hour).

Today, we'll go back to the idea of pitches per plate appearance. In our last piece, we observed that — like his walk rate — Valdespin boosted his Pitches/PA throughout the season in 2012 (click image to embiggen): 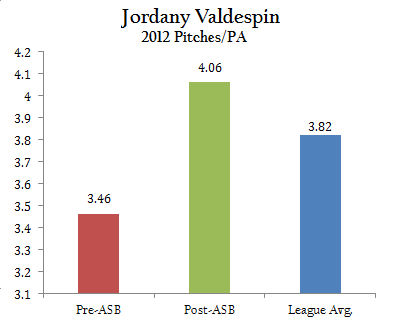 On average the 25-year-old posted a 3.84 Pitches/PA mark. So what's he done so far this spring? In 14 spring training plate appearances Valdespin has seen a total of 59 pitches, good for 4.21 Pitches/PA*.

Obviously this is a miniscule sample size. However, pitches per plate appearances is a stat that — to a degree — belies intent/gameplan of the batter (though, especially in spring, could also point to effectiveness of the pitcher). At the most basic level, if a batter decides not to swing it's not as if the pitcher can defeat him on one or two pitches. He's almost always going to see at least three pitches, and in most cases he'll see more than that. So the fact that the batter can mostly drive this stat on a plate appearance to plate appearance basis means that there conceivably could be some useful insight to be gleaned here — despite the limited sample.

Additionally, for further insight into batter intent we can also look to swings on first pitch percentage. In 2012, Valdespin offered at 23% of first pitches. Thus far in spring he's offered at 7%, basically 1 of 14 (and that one came on a missed drag bunt attempt). Again, small sample and the whole idea of the effectiveness of the pitchers faced comes into play. Yet the general gist of the numbers also points in the same direction to what we observed with pitches per plate appearance.

Valdespin has yet to take a walk this spring, yet the fact that we're seeing him take more pitches than he did last season — even in the second half — most likely tells us that he's continuing to implement the strategy to work on plate discipline. Obviously it's very early and the opposition is not in mid-season form. But for a guy that needs to improve his approach at the plate to become a more consistent contributor this is pretty much exactly what we'd hope to see through the first two weeks of camp.

*Note - Sample does not include the three plate appearances from the February 26th game where pitch-by-pitch data is not available; for the record Valdespin went 1-for-3 with no walks and no strikeouts.

As you may have heard, Kirk Nieuwenhuis came up lame during yesterday's 6-4 loss to the Marlins. Early returns make it sound like nothing more than a bad bruise to his left knee sustained when he slid headfirst into second base in the seventh inning. However, Nieuwenhuis had to be carted off the field and was visibly upset upon returning to the dugout. 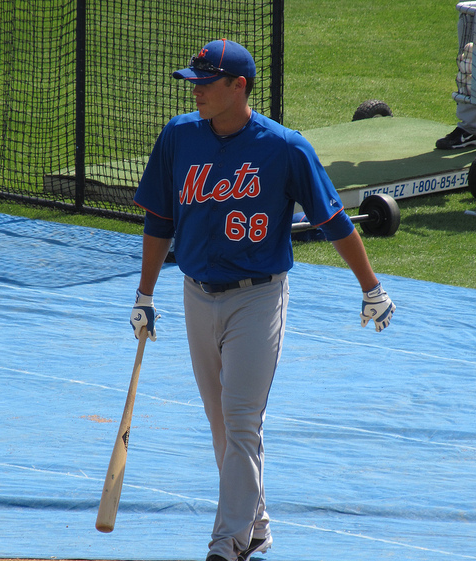 Matt den Dekker struck out in 26% of his plate appearances across Double and Triple-A in 2012. (Photo courtesy of Bryan Green)

So the question is what happens if the Captain — who was already suffering through one of the tougher springs, currently 1-for-18 with seven strikeouts — is not fit for duty come Opening Day? Well the convenient response is to look to the Mets other left-handed center field prospect, Matt den Dekker.

The 25-year-old has already endeared himself this spring with his highlight reel defensive ability. The kid can clearly play a very strong center field, that much is certain. And with an outfield corps whose defensive chops are somewhat suspect, the addition of den Dekker's glove would certainly be welcome. It also doesn't hurt that the lanky lefty also happens to possess some surprising home run pop, another trait that the current roster is rather wont for.

However, the key issue is that the 2010 fifth rounder suffers from many of the same afflictions that mired Nieuwenhuis during his rookie campaign in 2012. Above all else, that means den Dekker strikes out. A lot. In Double-A he struck out 24% of the time. In Triple-A that number jumped to 28%. There's almost no amount of offensive ability that will overcome such a fatal flaw — meaning that without a huge improvement in that department Kirk's .252 average might represent a best case scenario for den Dekker — with a far lower mark very possible. Additionally, like Kirk he's struggled historically against lefties.

Now it's still early, so hopefully Kirk bounces back and quiets these questions. However, with Collin Cowgill seemingly earning a lot more than a straight platoon role based on a loud spring thus far, it seems plausible that den Dekker could head north with the big club in a pseudo-fourth outfielder gig — making a couple starts a week against righties and playing stellar defense late in games.

As an aside, it's worth mentioning Juan Lagares as a dark horse candidate as he's impressed this spring, both offensively and defensively. However, the righty likely would not represent an ideal platoon partner for Cowgill — and definitely wouldn't match den Dekker's ability with the glove.