The home-grown fan favorite put it all together in two explosive seasons, but an ailing elbow and Mike Piazza did him in.

Share All sharing options for: The Top 50 Mets of All Time: #37 Todd Hundley

Mike Piazza, the Dodgers catcher, switched on the clubhouse television to see Todd Hundley knock out yet another home run, his 36th of the year. Turning to a reporter, Piazza grinned. 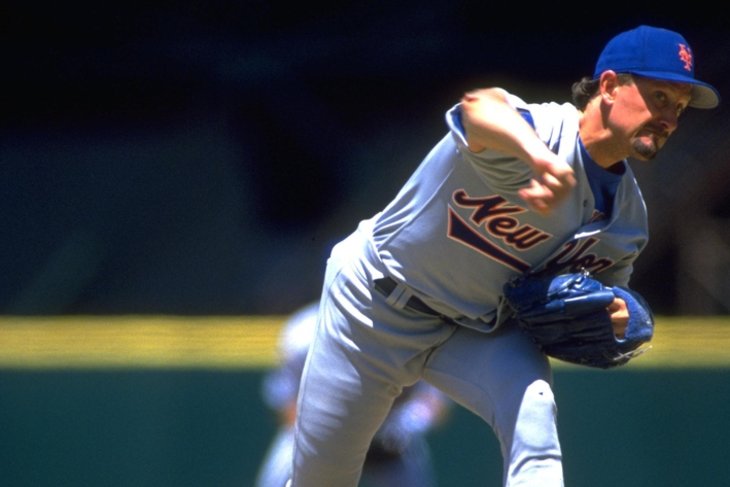 From 1953 until September 14, 1996, the single-season home run record for a catcher stood at 40, established by Brooklyn's Roy Campanella. Hundley broke the mark with a left-handed opposite-field swing on an 0-2 fastball away — not exactly his bread and butter — becoming perhaps the best power-hitting catcher in baseball. It was funny, as he had only lately become the best power-hitting catcher in his own family.

Todd was just an infant when his major-league-backstop father, Randy Hundley, was brought down with his Cubs teammates by the 1969 Mets. As a kid, Todd often skipped school in favor of class at Wrigley Field — "He kind of grew up there," Randy said — and received countless pitches from his old man both behind and beside the plate.

"At two or three years old," Randy claimed, "Todd's swing was singled out by Cubbie announcer Jack Brickhouse as the 'greatest' he ever saw." Oh, dad. 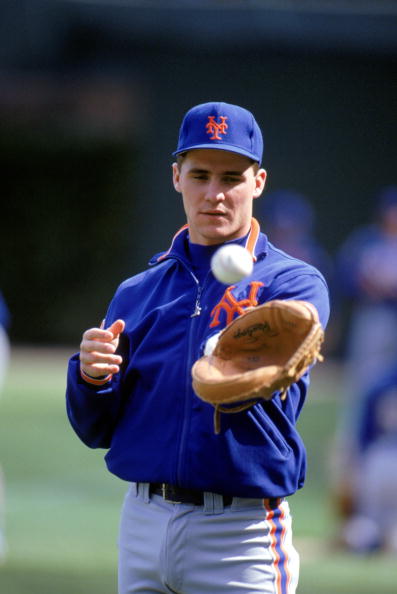 In 1987, Todd was drafted in the second round by the Mets and gained a reputation as a confident, smart catcher who, contra Jack Brickhouse, couldn't handle a bat. "At age 18, he could have caught Triple A, he was that sure of himself, that skilled defensively," remembered Gerry Hunsicker, Mets assistant VP of baseball operations.

"Any offense would be a bonus." - Gerry Hunsicker

By age 21, Hundley was called up to Queens in successive seasons, and though he failed to hit for a respectable average in either stint, he earned the starting job the next year, 1992. The Mets high-powered pitching staff led by Dwight Gooden and Bret Saberhagen "raved about his presence behind the plate," Hunsicker said. So "any offense would be a bonus."

There wasn't much of a bonus in the first couple of years, not for lack of trying. Almost daily, Hundley's wife, Tiffany, fed whiffle balls into a machine in their basement, to little effect: when the ball didn't whiffle, he couldn't crack a .270 OBP. Luckily for his playing time, the team stank, too.

Only in his third and fourth seasons as a starter, both injury-shortened, did the switch-hitting catcher break out. As Patrick Flood has noticed, Hundley learned to behave as a power hitter: walking more, striking out more, and employing his natural uppercut to blast 31 home runs in about a year's worth of at-bats in that span. New-found power transformed the catcher from a sub-replacement level player to an above-average major league hitter at a premier defensive position. 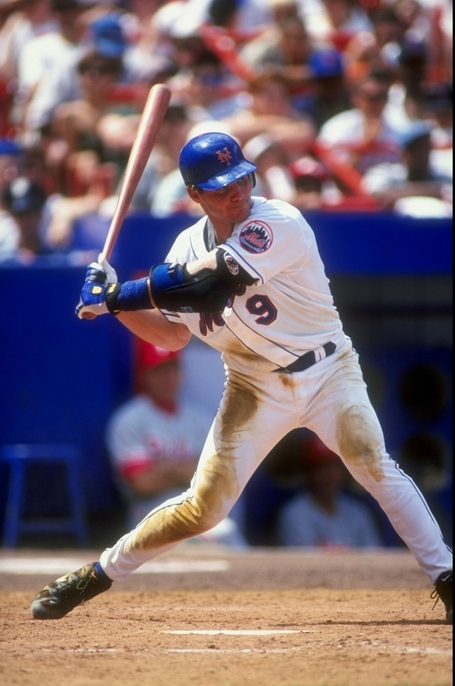 According the to the Mitchell report, Mets clubhouse employee Kirk Radomski began selling Deca-Durabolin and testosterone to Hundley in 1996, promising him 40 home runs if he followed his regiment. The story has a whiff of patness, but Hundley has not, so far as I can find, denied the broad charge. The report goes on to point out that Hundley's 41 home runs in 1996 demolished his previous season-best of 16, which is true, but not as shocking as it first appears when accounting for past injuries and his then-recent progress. The short of it is that Todd Hundley, like many others, probably juiced.

1996 was a year of impressive achievements. With a single swing in mid-August, Todd bested his father's career home run mark (82) and Gary Carter's single-season record for a Mets catcher (32). Soon after, he took down Strawberry's franchise record at any position (39). Number 41 came before a national television audience, and Hundley's first ever curtain call contained echoes of the Kid.

"I wanted to stay there awhile, but we had to get on with the game," Hundley said. "I've been through a lot with the fans here. I've gone from getting booed by 40,000 to getting a standing ovation from 20,000 or 30,000." As team leader and home-grown favorite, Hundley had arrived.

In '96 he hit .259/.356/.550 with 41 homers in near daily appearances behind the plate (153 games.) In '97, playing with a new four-year, $21 million contract, the 28-year-old posted a career-best .943 OPS mark and swatted 30 homers in 132 games. But the season was not without acrimony — high-profile squabbles with Bobby Valentine over his sleep schedule, accusations that he'd let his defense slip, a troubled throwing elbow that eventually required surgery, and the real stuff: Hundley's mother was diagnosed with cancer, and his wife experienced serious troubles with her third pregnancy.

"The kid is so strong mentally it's unreal," Randy Hundley said about his son. 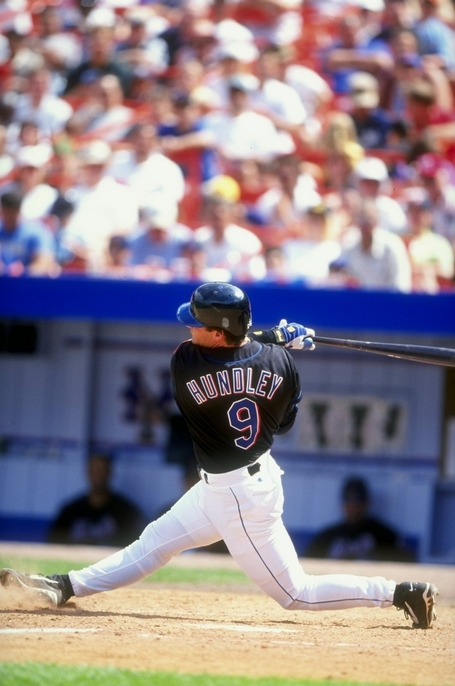 Hundley planned to shut down his elbow unless the team found itself in contention, which the Mets surprisingly did, winning 88 games for the first time since 1990, but failing to make the playoffs. So the ailing catcher played on, then entered the '98 season with more than just a surgically-repaired elbow. For the first time in years, he had competition, and not the sort you beat.

Mike Piazza was a Met.

On June 11, 1998, a recuperated Hundley took the field to a standing ovation, and trotted into the unknown terrain of the outfield. The team as a whole was struggling, and Hundley hoped to right the ship. "I've been with these guys a long time," he said, perhaps pointedly. "I know them real well, what makes them tick and what buttons to push." From the dugout, he watched Piazza, hitting .345, crack a run-scoring double.

For six-and-a-half weeks Hundley flailed out there, allowing an extra base to anyone willing to test his still-weak arm. In a hotel room meeting, Hundley and Bobby Valentine decided that pinch-hitting duty would suit him better, though with a .164 batting average, Hundley saw the writing on the wall. And didn't like Valentine any the better for it.

He finished out the season with a .527 OPS, then was packaged to the Dodgers in a three-team deal that brought Armando Benitez and Roger Cedeno to the Mets. Five years and barely one bWAR later, he retired from the game, like his father, a Chicago Cub.

In 1999, Mike Piazza matched his own career best by hitting 40 home runs. That was one short of his "hero."