The late Venezuelan president made a trip to Flushing for one of the weirdest, longest nights in Shea Stadium history.

We have a strict NO POLITICS rule here at Amazin' Avenue. Nonetheless, I could not let the passing of Venezuelan president Hugo Chavez go by without sparing a few nonpartisan words about his small role in one of the weirdest nights ever seen at Shea Stadium.

Picture it: Flushing, June 9, 1999. Chavez had been in power for a little over four months. Not yet known as (for lack of a better word) "controversial," he was visiting New York and considered benign enough to ring the closing bell at the stock exchange. Later that evening, Chavez attended the Mets-Blue Jays game at Shea Stadium and received the honor of throwing out the first pitch.

Usually when a special guest is asked to throw out the first pitch at a baseball game, they take a casual approach to the whole thing. Chavez did not. 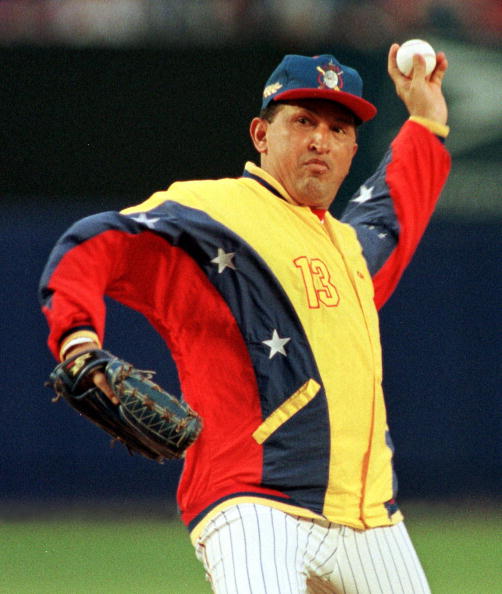 We have many things to discuss about this photo.

All of this would be amusing in and of itself. However, Chavez's visit to Shea coincided with a number of odd occurrences, at a particularly odd time of that Mets season. That his presence necessitated a pregame playing of the American and Canadian and Venezuelan national anthems, pushing a 7:40 pm start even later, is perhaps the least strange thing to happen thing that evening.

Before the game even started, the Mets received a blow when rookie Benny Agbayani (then hitting homers at an unsustainable Ruthian pace) suffered a freak injury during batting practice; a foul ball glanced off the batting cage and caromed right into Benny's eye, knocking him out of action. Manager Bobby Valentine was also forced to answer unanswerable questions about Bobby Bonilla, who hadn't played in several days for reasons no one was willing to discuss. "Yesterday, he was asked to pinch-hit and he couldn't," Valentine offered, cryptically. "I was told today it was the same situation. I'm very confused." It would later come out that Bonilla had refused to pinch hit the night before and was being quietly benched for his insolence, but then as now, it was impossible for the Mets to do things like this quietly.

On top of all this nonsense, this game marked the first New York appearance by ex-Yankee David Wells since he'd been traded to the Blue Jays in exchange for Roger Clemens. As such, the sparse crowd on hand seemed tilted decidedly against the home team. With this advantage at his back, Wells shut out the Mets for 8 innings, while his teammates scored three times off of starter Rick Reed.

Wells attempted to finish what he started, but his thoughts may have been elsewhere. June 9 was his birthday, after all, and Boomer had a huge postgame bash planned at SoHo hotspot Veruka. (According to the Times, guests included Sarah Jessica Parker, Lorne Michaels, and Penny Marshall. Club owner Noel Ashman made frantic calls from field level during the game, dictating to his doorman who should be granted entry and who should be made to wait.) Down to their last out, the Mets rallied to tie on back to back doubles from Robin Ventura and Brian McRae.

The game straggled on into the wee hours, outlasting game 5 of the Eastern Conference Finals. (The Knicks beat the Pacers, 101-94, by the way.) There was a palpable frustration in the air when, in the top of the 12th, Mike Piazza was called for catcher's interference. Bobby Valentine protested the call with his usual brio and was ejected for his trouble, not for the first or last time. What was remarkable is that he chose to return to the dugout area looking like this: 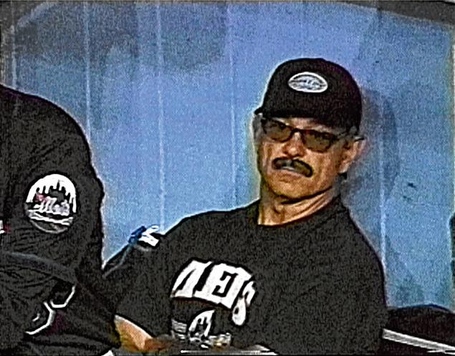 Valentine wandered back into the clubhouse less than a minute later, but not before cameras caught him in the act. When questioned about it later, Valentine initially played dumb, then tried to protest he'd violated the spirit but not the letter of the law because he didn't actually enter the dugout. But once he received a two-game suspension and a hefty fine, Bobby V more or less copped to the deed, chalking his antics up to the extremely stressful period the Mets had gone through."It was a mistake," he admitted, "but for a moment the emotions of a group of tight people, it was a break, and for me too." (The Mets won the game, by the way, on a 14th inning RBI single from Rey Ordonez.)

The costumed caper came on the heels of an 8-game losing streak, the Subway Series, and the firing of several of Valentine's closest coaches. It's easy to see how this could make a man snap. However, is it crazy to think that Hugo Chavez's presence at Shea Stadium on an evening when so many crazy things happened was more than just a coincidence? Of course it's crazy. C'mon, now.