The Mets won 11-2 on Opening Day behind a strong start from Jon Niese.

They don't make baseball games much easier than the Mets' Opening Day win. When your favorite team scores eleven runs and hold the opponent to just two, it's all smiles, and that's not such a bad thing after the seemingly endless winter. 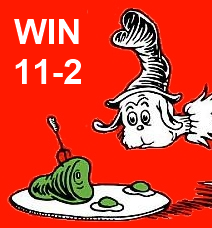 The Mets scored early and often in this afternoon's victory, but Jon Niese was very good in his first-ever Opening Day start. He went six-and-two-thirds innings in the game — arguing his way into those last two outs in the seventh inning after Terry Collins told him he was done after six — and gave up just two runs. His four strikeouts and two walks weren't otherworldly, but they didn't have to be. After giving up a run in the third inning, Niese was in a groove through the remainder of his outing aside from the solo home run he served up on a platter to Yonder Alonso.

At the plate, practically everyone shined. The Mets saw a ton of pitches — facing Edinson Volquez never hurt anybody in that department — and scored runs with ease. They got started in the second inning.

With two outs and nobody on in the inning, John Buck drew a walk. Ruben Tejada followed up with a double, and Tim Teufel sent the slow-footed Buck home, most likely thinking it was worth the risk to do so with Niese in the on-deck circle. Buck scored, and Niese came up and singled to drive in Tejada.

The Mets added another pair of runs in the third, as two-out singles by Marlon Byrd and Buck drove in a run a piece. In the bottom of the fourth, Niese led off with a four-pitch walk, and Collin Cowgill doubled to put two men in scoring position and chase Volquez from the game. Daniel Murphy singled in Niese before David Wright grounded out to plate the Mets' sixth run of the afternoon. After Ike Davis's third strikeout of the day, Byrd came up and drove in the seventh run with another two-out single.

From there, the Mets' bats were quiet for a couple innings, but they tacked on four runs in the seventh on a two-out, line-drive grand slam by Cowgill. That pretty much sealed the game, and it also means you won't have to hear "the Mets haven't hit a grand slam yet this year" for the entire 2013 season. Thank goodness.

As for the bullpen, it was Brandon Lyon who came into the seventh inning in place of Niese. He generated two ground balls on two pitches, the first of which resulted in an error by Ruben Tejada. The second, though, ended the inning. Scott Atchison threw a scoreless eighth inning, and Scott Rice — who played fourteen years in the minors before today — struck out two in his one-two-three major league debut in the ninth inning to end the game.

Sure, it's just one game, and there are many more to come this summer. But if there's a perfect way to start the year, this was it. 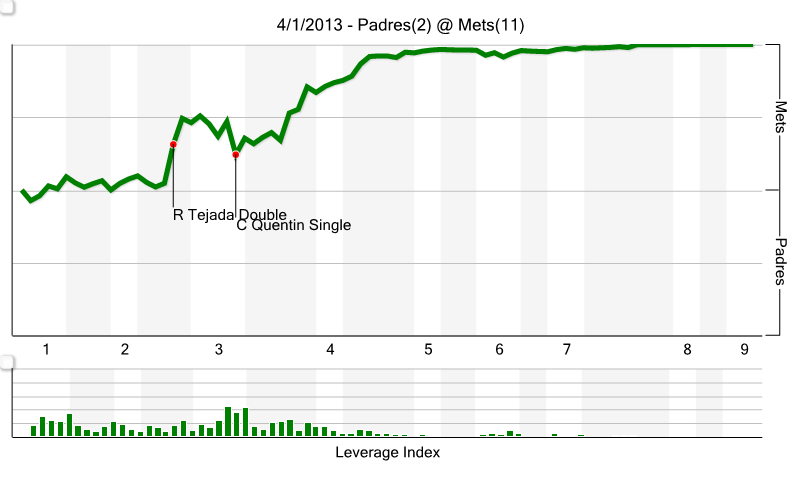