Digging a little deeper to uncover underrated prospects for 2013.

In Monday's entry in this series to discover underrated prospects through the use of lesser known statistics, we discovered that Savannah starter Rainy Lara strikes out a lot more guys than perhaps many of us realized.

Today we'll look at a personal favorite, Wilfredo Tovar. Anyone who reads this space with any regularity knows that I've been beating the Tovar drum for a while. By a while I mean I picked Tovar as a sleeper back in 2011; here's what I said about Tovar back then:

"Tovar is a 'Punch and Judy' style hitter who happens to possess a very good—nay— extraordinary glove; a glove so good that it projects as major league-plus caliber at short...Thanks to his small stature (5'10", 160 lbs) he'll never develop much pop, but a .281 AVG with almost as many walks as strikeouts in the Low-A SAL— as an 18-year old— is nothing to scoff at. What's more, few prospects his age can boast any single legitimate plus, major league-caliber tool."

The fact that he's still a sleeper candidate two years later would typically tell you that things have not gone according to plan. Except that they have. Tovar has continued doing what he does these last couple seasons. He still hits for moderate average, the walks have ticked up, he never strikes out, and he plays a magnificent shortstop.

The thing is, that's not the flashiest skillset. While I tabbed Tovar as the no. 14 prospect in the Mets system back in February, few other rankings have agreed. Obviously, we can have the discussion about the value of a high floor versus that of a conversely low ceiling until we're blue in the face, but that's not what I want to discuss about Tovar.

I bring up Tovar to discuss those strikeouts—or the lack thereof. I should make it clear I'm focusing on his 2012 work in the Advanced-A Florida State League where, at age 20, he was still two years younger than the league average of 22.8. When Tovar reached Double-A after the All-Star break, the average age in the Eastern League was 24.2, making Tovar one of the five youngest players in the circuit—again, why I'm going to stick to discussing his work in the first half.

Now about those strikeouts. After exhibiting a proclivity to strike out in just over 10% of his plate appearances during the first three seasons of his career, Tovar took a big step forward in his second look at St. Lucie and cut that number down to a stellar 6.6%. That sort of contact ability is outstanding. The 2012 major league average was 19.8%. Tovar's sub-7% mark is in Luis Castillo and Jose Reyes territory.

Tovar was one of nine hitters in all of minor league baseball -- at Class-A or above -- to post a strikeout rate below 7% in 2012.

Furthermore, Tovar was one of nine hitters in all of minor league baseball Class-A or above to post a strikeout rate below 7% in 2012 (in 250 or more plate appearances). Drill down further and he was one of only two players in the minors to do so in his age-20 season or younger (the other being equally diminutive Cubs infield prospect Ronald Torreyes).

On the spectrum of relevance to one's future success, strikeout ability for a hitter isn't nearly as strong an indicator as it is for a pitcher. Plenty of good players strike out a lot. At the same time, it's also not some parlor trick. So let's look back at other Florida State League strikeout leaders to glimpse what potentially lies ahead for Tovar.

Of the 50 age-appropriate* players that have appeared in the top five from 2000 to 2009, 17 players established themselves as major leaguers in some form (any later than '09 and the players are still prospects, e.g. Wilmer Flores, Scooter Gennett, J.T. Realmuto). That's just over a 30% major league hit rate—not too shabby when it comes to prognosticating A-ballers. 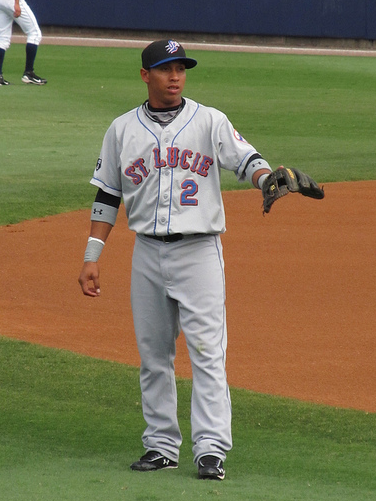 The key to this exercise is to determine whether Tovar fits into some larger profile, shaped by the players before him who exhibited similar skills. Assuming we ignore the outliers (namely, Jose Reyes) the analysis of those names definitely shows some resemblance. Like Tovar, many of those guys are up-the-middle players who offer(ed) more in the way of strong glove skills and speed than the ability to drive in runs.

The number one gripe about Wilfredo Tovar as a prospect is his lack of size/strength and the subsequent non-existence of power. Yet guys like Revere, Escobar, and Casilla all feature the same lack of size/dearth of power, but find ways to be valuable by playing strong defense at premium positions and offering contact-oriented offensive approaches at the plate.

In short, Tovar's lack of power is not necessarily the death knell to his prospect status that many presage. Does it limit his ceiling? It absolutely does. But I don't expect Tovar to transform into Reyes. He doesn't have to be Reyes in order to play outstanding defense at shortstop—slap/bunt/walk his way on base and steal a couple dozen bases on his way to being a cheap, 1-2 WAR player.

Again, that's not the flashiest profile, but (not to drag up the ceiling vs. floor debate again) not every prospect is supposed to be a budding superstar. In the end, the 1.5 WAR major leaguers are still worth more than the zero WAR busts.

*excludes players that were older than the league average, which was 22 for all years except '06 and '07 when it was 23.