Jordany Valdespin and bias in baseball

Share All sharing options for: Jordany Valdespin and bias in baseball

If you didn't catch Wednesday night's game, the Mets had a rather embarrassing baserunning moment in the top of the fifth inning of their eventual 7-3 defeat in Philadelphia. Here's how it unfolded:

Interesting lapse in concentration by Murphy; but I'm more interested in what else happened here. Namely, what exactly were the grounds for the Valdespin admonishment from the booth?

First, let's identify the central offense here. Obviously the problem is that the inning ends prematurely. Now this is always a bad thing; however in this instance it's made worse by the knowledge that there was a run nearly guaranteed to score had the inning lasted even a few moments longer.

Now let's identify the main players. Like a Pinter play there are A, B, and C: Revere, Valdespin, and Murphy. Revere catches the ball somewhat unexpectedly. Valdespin tags up and jogs home. Murphy takes an inexplicably large lead to the point that he could not return to second base before being doubled up. I don't feel it's going out on a limb to say that Murphy is pretty clearly the main offender here. In fact if we're going to dole out blame for the inning ending and the subsequent run not scoring, we'd probably be safe to assign 99 to 100% to Murphy.

Just to drive that point home, here's a diagram of the moment in question -- when Revere caught the ball (click image to embiggen): 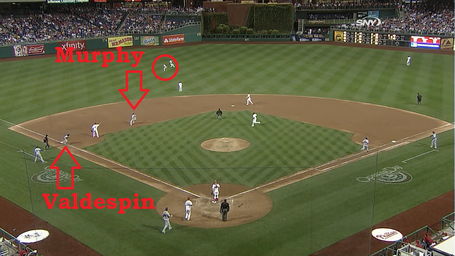 Once again, very little doubt exists as to why the run didn't score. Murphy screwed up. And yet, here is the ensuing exchange between Gary, Keith, and Ron, verbatim:

Gary: "Well, the Mets running themselves out of an inning in the top of the fifth. Should have had at least one run, but wind up with none. And I guess we'll show exactly what happened [referring to the instant replay], but you have to say it was poorly executed all around."

Ron: "You know, if they get that run across it's five to three!"

Gary: "Valdespin, though, was not running hard coming home -- not that he would have beaten the play had he been running hard. But how does he know that Revere's not throwing the ball home? That ball was caught in very shallow left center field."

Ron: "And you're taught that when the ball is caught and you tag up, you look at home, and you sprint through the base, you know?"

Gary: "So it was a mess-up all the way around."

Gary: "Let's go back to that play where Murphy got doubled off." /instant replay runs

Keith: "Well keep your eye on Murph. Now watch, he turns his back to home plate properly. He kinda is right there, making his read. But then he feels -- I don't know what he thought -- that Revere wasn't gonna get there. Obviously he did. And you just can't do that. That cost a run right there. He knows it."

Gary: "And because the out was made before Valdespin crossed the plate the run doesn't count. But Valdespin was not even jogging.

Ron: "Well take a look at it this way, imagine if the throw had pulled Utley off the bag and he had to reach back and tag Murphy. If he had been sprinting he would have crossed the plate before that, but he was watching the play."

And then there's the telltale post-error closeup. You know, the moment when the production director inevitably cuts to a prolonged shot of the guilty party in the aftermath of said bonehead play.

Murphy's closeup lasted for 11 seconds as GKR re-hashed his part in the debacle: 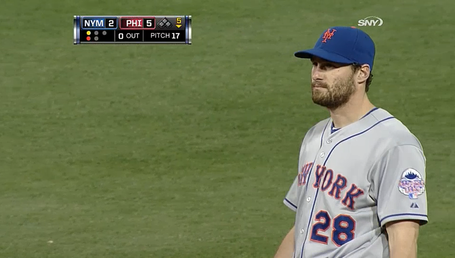 Then came Valdy. The camera held on Valdespin for 24 seconds -- on two separate shots -- as GKR dissected his involvement in the gaffe: 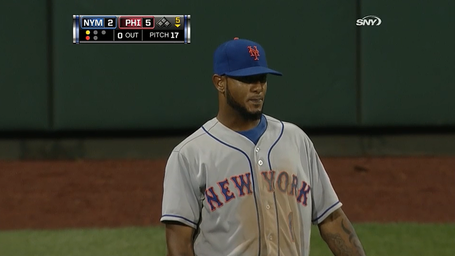 If that's not technical enough for you, 78 of the 198 words above that relate to a statement about one of the players specifically were spent on Murphy. 120 went to Valdespin.

It's very possible I'm reading too deeply into this. I mean, I'm counting words here. However, all I can say is that at least to one man it certainly sounded like Valdespin got the brunt of the consternation despite a concurrent mistake that was far more egregious than his own. All because he didn't run hard -- an effort that was inconsequential to the outcome of the play. As Gary himself stated, no amount of speed would have beaten the ball. Ron proposed a What If scenario where his effort might have mattered had the ball come home -- despite a center fielder with a whopping two outfield assists in 2012. But again, that's a What If, not reality. In reality, Valdespin did not matter.

So why did Valdespin seemingly receive the lion's share when it came time to dissect and criticize the play? Why did GKR so curiously and so visibly pick on him after a play where he was guilty of a slight breach of baseball etiquette, at best?

There's been some interesting chatter on the idea of bias in baseball over the past twelve months or so, culminating in an article published in The Atlantic last August on that very subject. More accurately, it was a study that attempted to put some data behind the long-standing idea that baseball, as it is packaged and presented to the fan, is somewhat skewed as a result of the biases of the de facto middleman -- the broadcaster.

It was certainly an interesting exercise. Not without it's flaws, mind you, but it's very hard to deny the relevance of some of the findings. Namely the key takeaway about some of the filters that exist between broadcaster and viewer:

"The analysis reveals that foreign-born players—the vast majority of whom are Latino—are at a distinct disadvantage when it comes to receiving praise for intangibles. Latino players are almost 13 percent less likely to be praised for intangibles than their white counterparts."

Now don't get me wrong, I'm not trying to stoke the flames of the growing 'Whites hate Valdespin" movement -- in this particular case I don't think race played into the discussion. However, it's no secret that the 25-year-old lightning rod is nobody's favorite player. He's someone best described as brash, arrogant, supremely self confident. His past is littered with conduct issues, a few suspensions, and various off-the-record tales that paint him the textbook 'hard to love' player and teammate.

While it may not be race-induced, there are very palpable signals that people in and around the Mets clubhouse frankly do not like Valdespin. From players, to Mets staff, to the guys who cover the team. To me, this instance -- where Valdespin was only tangentially related to the play, but somehow ended up in the crosshairs -- was a perfect example. For those of you radio listeners, no doubt you've heard one of Howie's tongue-in-cheek warnings to hold on to your hats every time Valdespin comes to the plate (oddly, I've not heard such a warning when the equally hard-swinging Cowgill comes to the dish nor do I detect nearly this much vitriol any of the countless times I've observed a Mets pitcher who doesn't cover home, etc). A quick Google News search of the term 'Valdespin' returns the following headlines:

And yet, despite all that he's quite clearly one of the better players on the Mets. The guy is currently batting .400/.471/.500. When placed in the leadoff position he's posting a .700 on-base percentage. He's beautifully implementing the club's request for him to be more patient, averaging 4.29 pitches per plate appearance -- up from 2012 (3.88) and far better than the current NL average (3.82). For a guy that has to learn to play the game 'the right way', he's certainly playing it pretty successfully.

Obviously I don't doubt that he's a tough guy to be around. I don't expect that he's going to win Miss Congeniality. But what I do expect is that broadcasters -- especially Gary, Keith, and Ron -- must be able to table their personal feelings about a guy whose style they may or may not like.

Fortunately, we Mets fans are lucky enough to be blessed with highly unbiased announcers. Like any of us, however, even broadcasters' opinions are heavily colored by their own personal values and, yes, biases. But for those in the booth it's important to set aside those biases and give us all a fair representation of what's actually taking place on the field.