Digging a little deeper to uncover underrated prospects for 2013.

For part three of this series -- where we're looking at 'below the radar' statistics to find sleeper prospects -- we'll get back on the beaten path a bit. To this point we've learned a lot by looking at strikeout percentages. On the mound, Rainy Lara possesses more value than we might have thought by keeping his extraordinarily high. At the plate, Wilfredo Tovar does the same, only the opposite -- keeping his extremely low. Today, we're going to look at stolen bases -- not necessarily the most obscure statistic out there.

Specifically, I want to discuss Binghamton center fielder Alonzo Harris. First off, let's review what I wrote about the 23-year-old outfielder in the most recent AA prospect rankings:

"The 2007 39th-round shortstop-turned-outfielder's prospect stock was on life support after it took him three tries to conquer Single-A Savannah. However, in his first assignment to High-A in 2012, Harris surprisingly thrived. That includes an extremely promising walk rate (8.9%), a drastic decline in strikeouts (13.4%) , and a stolen base total more than twice his previous career high (40). He still profiles as a speedy fourth outfielder at best, but when a player this athletic exhibits such impressive growth in secondary skills — especially against somewhat advanced pitching — it's unwise to ignore it."

For the record, Harris slotted into the no. 50 position in the rankings -- upon review though he could have easily been placed much higher.

As previously stated, Harris reclaimed much of his value by acquiring a plan at the plate. Observe his walk rate mapped against his strikeout rate over the course of his career (click image to embiggen): 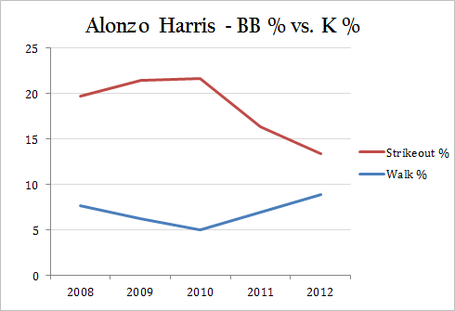 It would seem that few players in the system benefited from the new found organizational philosophy preaching patience more than Harris. His 13.4% strikeout rate in 2012 was not only a career high, it also ranked in the top 20 in the Florida State League.

The last Mets minor leaguer to swipe 40 or more bases as high as Advanced-A before Harris did it in 2012 was Carlos Gomez, who nabbed 41 for Binghamton back in 2006.

However, that's not the stat that makes Harris so interesting. Instead, I'm much more intrigued by the cascading effect that his increased on-base percentage has had on his stolen bases. Now as I pointed out, stolen bases aren't exactly the most obscure statistic around. What makes these 40 stolen bases so interesting, however, is their context within the system -- a system bereft of impact speed in recent years.

Specifically, the last Mets minor leaguer to swipe 40 or more bases as high as Advanced-A -- the level that more or less puts a player on the major league radar -- before Harris did it in 2012 was Carlos Gomez, who nabbed 41 for Binghamton back in 2006. Since then there has been very little impact speed on the basepaths at the upper levels of the club's farm system, aside from Jordany Valdespin once taking 33 also with Binghamton in 2011. Unfortunately, that trend has begun to bubble up to the major league level now that players like Jose Reyes and Angel Pagan have left for greener pastures (click image to embiggen): 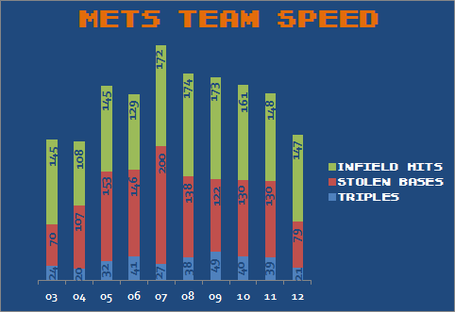 Harris' overall package may not give him the highest ceiling among Mets outfield prospects. However, what his burgeoning plate discipline paired with the system's best speed on the basepaths does give him is arguably one of the best shots to make an impact at the major league level among them.

For the record, the Mets have never in their history graduated a player drafted in the 39th round of the June draft to the major leagues.