It doesn't get much better than a Matt Harvey start.

Although the Twins aren't projected to do much this year, Matt Harvey made pitching against them look awfully easy this afternoon in Minnesota. He went six-and-two-thirds innings before he even allowed a hit, and he completed eight excellent innings despite losing the no-hitter. The Mets put up a four-run fifth inning, too, which proved to be enough for the team beat the Twins for the second straight day.

Harvey was flat out dominant. He looked good early in the game, but he looked better and better as the game progressed. In total, he struck out six, walked two, and allowed two hits and one run in eight innings of work. He had no problem blowing away Twins hitters with his fastball, but he mixed in his slider, changeup, and curveball effectively.

But the fastball — wow. Here's Harvey's velocity on a pitch-by-pitch basis from the game via Brooks Baseball.

That fastball that nearly touched 98 miles per hour late in his start was particularly impressive. For a while, it looked like Harvey was going to complete the Mets' second-ever no-hitter, but with two outs in the seventh inning, Justin Morneau hit a home run off the right field foul pole to end the no-no bid and the potential shutout.

Before that, the Mets had given Harvey a lead in the fifth inning. Marlon Byrd hit a bomb to begin the inning and put the Mets on the board. Ike Davis followed that with a single but got thrown out at second foolishly trying to stretch the hit into a double. Josh Willingham made a good throw on the play, but Davis had no business heading to second. The Mets just kept on hitting after that anyways, though.

Justin Turner singled, Ruben Tejada double, and Collin Cowgill hit an infield single — which could have easily been ruled an error on Trevor Plouffe — to score the Mets' second run. Daniel Murphy singled to put the Mets ahead three-zip, chasing Twins starter Scott Diamond from the game.

David Wright greeted Twins reliever Josh Roenicke with a hard ground ball to the leg, which deflected towards third base and resulted in a run-scoring infield single. The Mets had a real opportunity to put a dagger in the Twins after that, but Roenicke managed to escape the inning without allowing another run to score.

The Mets didn't do much with the bats through the end of the game, but the four runs they scored in the fifth held up. Harvey allowed just the one aforementioned run on Morneau's home run, but Bobby Parnell pitched a shaky ninth inning in his first ave opportunity of the 2013 season.

Parnell struck out Aaron Hicks but yielded back-to-back doubles to Joe Mauer and Willingham, the latter of which cut the Mets' lead to 4-2. But he retired Morneau on a fly ball and struck Ryan Doumit out looking to end the game.

The Mets look for the sweep tomorrow at 2:10 pm EDT with Dillon Gee making the start for the good guys. Two-years-ten-million-dollars Kevin Correia will take the hill for the Twinkies. 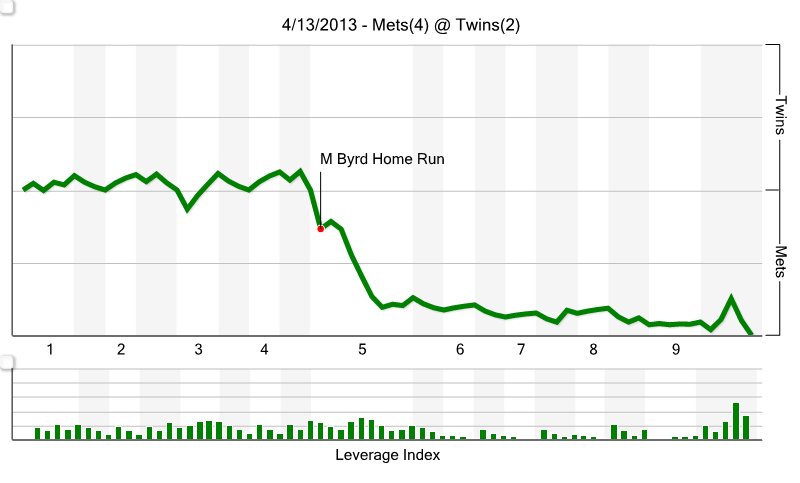