Catch up on all of last night's minor league action from around the Mets farm system! *All results from games played on Sunday, April 14th, 2013

Zack Wheeler took the mound for the 51's, and everyone tuned in. He threw 5.1 innings of mixed result baseball, allowing six hits and three runs (including a Tyler Colvin home run to start off the 2nd inning), but striking out eight batters while walking none. A comedy of errors and a Jamie Hoffmann three-run home run bailed out Wheeler in the bottom of the second, and put the 51's on top 3-1, but the Sky Sox kept nibbling. A Corey Dickerson triple and Nolan Arenado double in the 4th plated another run, and a Ben Paulsen triple plated Arenado in the 6th, tying the score. The 51's scored another run in the 7th on a Juan Lagares home run to inch ahead of the Sky Sox 4-3, but Tyler Colvin homered again in the top of the 7th, tying the game once again- Landon Powell's bases-loaded groundout to end the 6th inning loomed large there. In nine innings, no winner could be determined, so we got some extra baseball. The inning began with Juan Lagares drawing a walk. With pinch-hitter Travis d'Arnaud at bat, Coty Woods threw a wild pitch, allowing Lagares to get over to second. This led to a d'Arnaud walk, and a Wilmer Flores bunt (what a team player!). With runners at second and third, Josh Satin was unable to get the job done, stranding the pair. Reese Havens, who came into the ballgame in the 6th as part of a double switch, lined a single to centerfield, winning the game and salvaging the series.

Binghamton scored early and scored often against Fisher Cats starter and 18th century gentleman, Austin Bibens-Dirkx. In the 1st inning, with bases loaded, Allan Dykstra hit a sac fly. In the 2nd inning, Blake Forsythe hit a solo homer. In the 3rd inning, Cory Vaughn hit a three-run dinger. In the 5th inning, with bases loaded, Cesar Puello hit a single that drove in a run; it could've been more, as Allan Dykstra was gunned down at the plate by Fisher Cat left fielder Kevin Pillar. On the pitching side of the ledger, Rafael Montero put together a decent outing. He lasted only 5 innings, and allowed two earned runs (including a Brad Glenn home run), struck out six while walking only one. Mark Cohoon relieved Montero for two innings, allowing a few hits but not allowing any runs. Jack Leathersich faced two batters, walking one and striking out the other, and Jeffrey Walters pitched the 9th, earning his second save of the year.

St. Lucie won the series, trouncing the Marauders 8-2 on a balmy 84-degree, partly cloudy Sunday afternoon. The St. Lucie Mets scored in the 1st and 2nd innings, took a little break, and scored another in the 3rd. Starter Angel Cuan, who had been keeping Bradenton off the board until that point while striking out six batters, gave up a solo homer to clean-up hitter Jose Osuna to start off the bottom of the 4th, and allowed an additional run to cross the plate on a series of hits and a hit batter. That would be his only blemish, and the only runs the Marauders would score for the rest of the game. The St. Lucie offense was not content with three runs, though. They would score another run in the 6th and 7th, and would put up a three spot in the 8th, on the power of a Brian Harrison home run.

Despite a well-pitched game by Rainy Lara, the Sand Gnats lost to the Rome Braves. Savannah out-hit the Braves 8 to 4, but Rome made those hits count more. The Sand Gnats took the lead first, scoring on a Eudy Pina fielder's choice in the bottom of the 3rd. They would hold the lead until the 6th, when Rome scored two runs. With bases loaded and no outs, Ronald Luna hit a groundball to third baseman Cole Frenzel, who threw it to catcher Kevin Plawecki and prevented a run from crossing the plate. The next batter, Josh Elander, hit a single that plated two runs, and chased Lara from the game. His replacement, Bret Mitchell, struck out the next two batters to keep the score at 2-1 and give Savannah a chance to make a comeback. The Sand Gnats tried, but were unable to: in the 7th, they got a man on first and second, but were unable to cash in and in the 8th, they had men on the corners, but were unable to cash in. Shae Simmons came in to pitch for 9th Rome and shut down Savannah, striking out two en route to his fifth save. 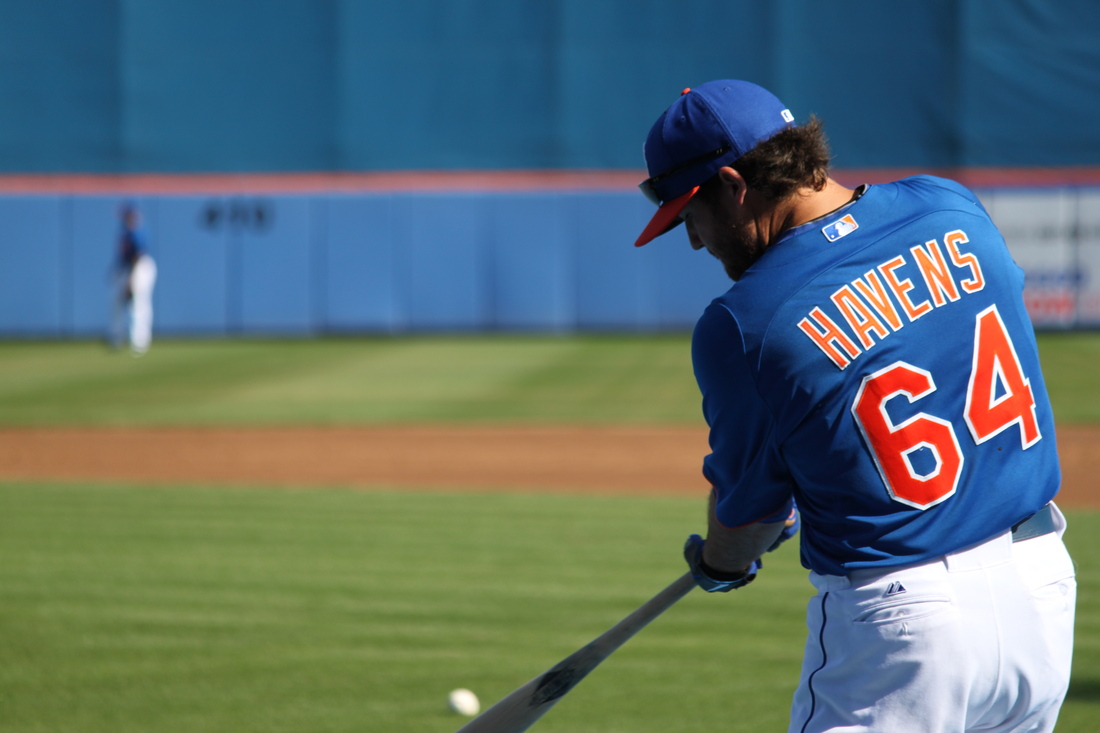 Ranking in the top ten since 2010, the 26-year-old Havens failed to appear in the latest AA Mets Prospect Rankings. (Photo Credit Chris McShane)

Pitchers at all levels struck out a large amount of batters (Lara: 7, Cuan: 8, Montero: 6, Wheeler: 8), but A) either allowed an equal number of hits, B) a few runs, or C) lasted only a few innings. As a result, I am not going to award any of them the star for tonight; while good, nobody truly stood out with an eye-catching performance. Instead, I'll give it to Reese Havens, whose 11th inning heroics won the ballgame.

Nobody performed particularly bad last night, which is a good thing. Kevin Plawecki and Jayce Boyd, the cogs of the Sand Gnat offense (hitting .410/.455/.667 and .368/.467/.553, respectively), were shut down last night, and as a result, Savannah lost a tight game and the system just missed a sweep for the day. They can each wear a horn apiece.