Share All sharing options for: Top 50 Mets of All Time: #34 John Franco

"The '69 team, that was my team," John Franco remembered of his hometown Mets.

He was nine years old that year, living with his mother, a homemaker and bingo fanatic, and his father, a sanitation worker, in the South Brooklyn neighborhood of Gravesend. Franco's father made it to every one of his games for Lafayette High School, where he pitched two no-hitters. After high school, Franco rode the subway two hours each way to attend St. John's University in Queens.

His St. John's teammate Frank Viola "had heard all about how good he was. So that first day I'm looking around for some guy who's six-four, six-five, blowing cheese by the hitters. And here's Johnny, about five-nine, walking around with that swagger of his."

"A tough SOB," Viola concluded. "Johnny pitched with a chip on his shoulder ever since I knew him." 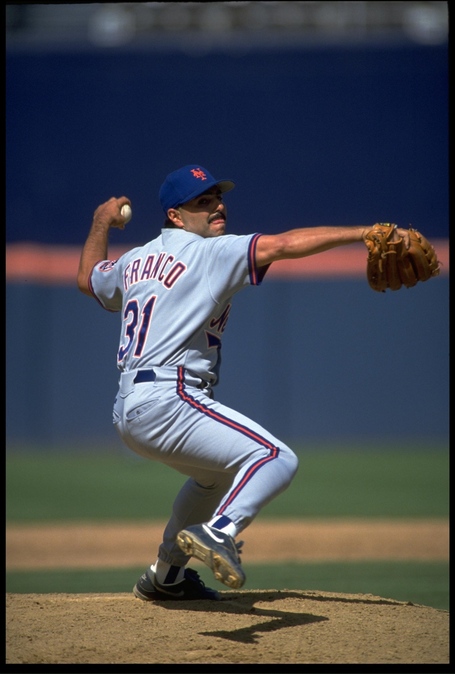 In 1981, Franco was picked in the fifth round of the amateur draft by the Los Angeles Dodgers. He worked with fellow left-hander Sandy Koufax to develop the unique screwball-changeup that would become his meal ticket. Two seasons later, Franco was traded to the Reds. By the 1986 season he was an All-Star in the bullpen, racking up impressive save totals with a minuscule home run rate and left-on-base percentages exceeding 80%.

Around the time of Franco's first big payday, both of his parents died. His father suffered a heart attack on the job. And when the city ordered a routine autopsy, John resisted so forcibly that he had to be handcuffed. Before his father's death, Franco had urged him to pick something nice as a celebratory gift from his major leaguer son. Tickled but overwhelmed, his father chose a few pairs of socks.

I didn't do my job the last three weeks. That bothers me, believe me. It bothers me incredibly. -Franco

Franco, a three-time All Star, came to the Mets prior to the 1990 season in an unusual swap of talented relief pitchers. The Mets parted with the young, cost-controlled righthander Randy Myers. Franco, 29, was just a year away from free agency. It was a questionable move, and the Reds would win the World Series with Myers the next year. But in the words of Mets GM Joe McIlvane, the Brooklynite was so pleased "he was bouncing off the wall."

Franco burst from the gate, notching eight saves with a 1.84 earned run average in his first dozen appearances. On September 1, the Mets were in first place, and Franco had saved 31 games—a team record. That all fell apart in the season's final month when Franco blew three saves and earned an additional three losses. It was a turning point that helped define both Franco and his beleaguered team for the next half-dozen years. 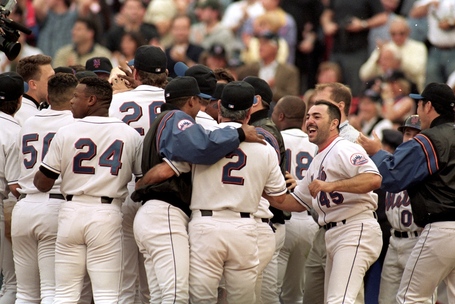 In interviews, Franco debuted his always fascinating persona: a proud, defensive, needy tough guy. "Look, the last three weeks, I struggled, I didn't do my job," he said. "But of the 60 or so hits off me the second half of the season, 20 or more were infield hits. Errors hurt me too... I was 17 for 17 from July to September. I didn't do my job the last three weeks. That bothers me, believe me. It bothers me incredibly. But I don't think I was why we lost."

Out at the movies one night, Franco was shocked to be heckled by a kid in his own neighborhood. "I know most everybody in the theater," he told a reporter. "I had my say, and the kid kind of slumped back into his seat." Meanwhile, the Mets slumped into the basement.

In 1991, a string of "mind-boggling" bad breaks and mishaps spelled trouble for the franchise. "Four losses and I still don't think a ball has left the infield."

Indeed, the lefty spent the first half of the '90s avoiding the home run ball and tallying impressive save totals, while being victimized by incompetent defense. Lacking the power to blow past hitters, Franco struck out about seven batters per nine innings, walked about three per, and made outings "interesting" by allowing plenty of hits. Other than a dismal 1993 season, he maintained a well-above-average ERA (including a 217 ERA+ in 1992) by keeping the ball in the yard and slipping out of jams.

Sometimes it was small comfort. Franco was often a whipping boy. In September 1993 he was so shaky that he lost his closer role to Mike Maddox. "I used to go to my dad at times like this," he said. "But can't no more; he's deceased." Franco returned to true form the next year, saving a league-leading 30 games in the strike-shortened season. He posted almost identical numbers in 1995. Then, in '96, he dropped his ERA down to 1.83 with 0.3 home runs per nine.

The '96 season was case in point for the strangeness of being John Franco. Recording his 300th career save, Franco was hoisted on teammates' shoulders as a hero. But at another point in the season, the boos rained down so hard he gave a fist-up salute roughly translated as "up yours." 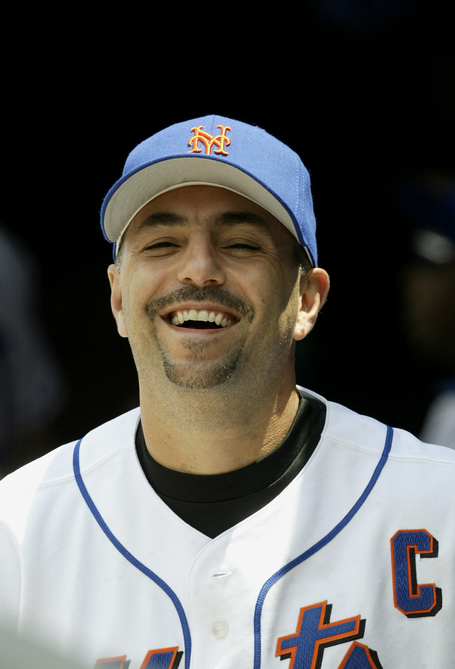 In 1997, Franco became the National League all-time saves leader. In the same year, the Mets posted their first winning record since 1990. "It's been 14 years and I've finished second eight times," Franco said the following year. "The clock is ticking."

The Mets missed their wildcard bid in 1998, though Franco was barely touched the last six weeks of the season. At 38, he entered the '99 season having never pitched a postseason inning, and promptly converted 19 of 20 save attempts on the team with the best chance yet.

With that infield it was simple: "I throw ground balls, they catch them." But Franco went down with a finger injury and, upon his return, lost the closer role to flame-throwing newcomer Armando Benitez. Franco had held the job for nine years.

Healthy for the playoffs, Franco thrived in a setup role. He allowed only one Diamondback to reach base in three-plus innings of the Division Series. In the 15-inning contest against the Braves (remembered for Robin Ventura's grand slam single), Franco contributed a scoreless outing. He stumbled only in the deciding Game Six, giving up an eighth-inning lead in a game the Mets would lose 10-9 in extra innings.

I had to ride out the storm here. I seen a lot of the bad. Hopefully I'll be around to see the good. -Franco

Franco remained in a setup role for the 2000 season when the Mets once again secured a wild card bid. But that time they stuck around for the big dance. Franco fared better against the first-round Cardinals than he did against the Giants, but his biggest moment came in the championship series. In game two, Armando Benitez surrendered a 4-1 lead in the ninth inning. In the tenth, Benitez gave up another single before Bobby Valentine pulled his young closer for the veteran, Franco, who caught Barry Bonds looking at a screwball-changeup for the game-ending strike three.

"I had to ride out the storm here. I seen a lot of the bad," Franco once said. "Hopefully I'll be around to see the good." Nothing in his career must have felt better than the wind from Bonds's bat. 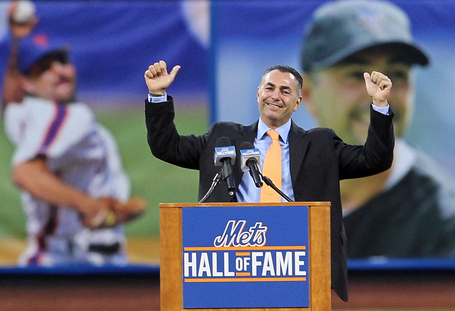 Franco was the winning pitcher in the Mets lone World Series victory against the Yankees, pitching a perfect eighth before Benny Agbayani's double broke the tie. In game five, he recorded the final out in the top of the ninth inning, but Mariano Rivera had the last laugh in the bottom. Franco stripped off his uniform and called it a season. Under his top, as always, was a New York Department of Sanitation T-shirt.

At age 40, Franco used Pilates to stay in shape. He remained in a setup role, performing steadily in 2001 as the team stumbled from the gate, got scorching hot, and then had the carpet pulled from under it on September 11. Franco's grief was personal.

They're still the best fans, no matter how they booed me. -Franco

"I lost friends who were fireman, policeman, people who worked for Cantor Fitzgerald," he said. New York Fire Commissioner Sal Cassano remembered Franco's response years later. "He did so much, bringing players to meet with kids who'd lost their parents. We had a ceremony with John where he couldn't even speak. And he's remained a friend to the department over the years, still coming around."

On September 31, the Mets were just a few games off the division lead when neither Benitez nor Franco could preserve a 5-1 lead in a do-or-die game against the Braves. On an 0-2 count, Franco made "a stupid pitch" -- "and I'm an idiot for throwing it" -- that was blasted for a walk-off grand slam.

Franco's elbow was shot prior to the 2002 season, and at 41 he elected to have Tommy John surgery rather than retire. After a year rehabbing, the father of three took the mound for two final seasons with the Mets, one pretty good, the next fairly awful. He recorded his 424th and final career save on August 24, 2003, against the Los Angeles Dodgers that had drafted him 22 years before.

The fans cheered that night. They cheered long and hard on a lot of nights for their captain, their neighbor, their fellow fan. "My people," Franco said.

"They're still the best fans, no matter how they booed me." 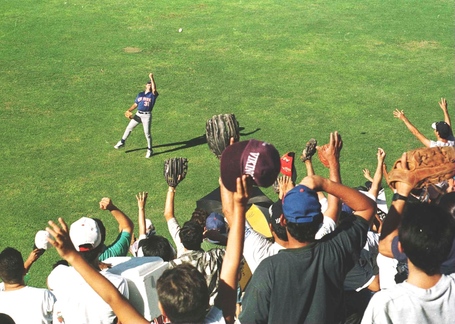