The Mets lost 9-8 in ten innings to the Rockies, blowing an 8-2 lead in the process. The Rockies swept the cold, long, and miserable doubleheader.

"There's snow blowing around... It's cold..." -- An exasperated Gary Cohen in the ninth inning tonight

There is plenty of blame to go around for tonight's game two debacle at Coors Field:

Tejada will likely receive most of the grief for this loss, and deservedly so. His error came on a routine grounder that, had he made the play, would have preserved the Mets' two-run lead heading into the ninth inning with Bobby Parnell on the mound. That makes six errors on the season for Tejada already. He also blew a chance to redeem himself in the ninth inning, when he flew out with runners on first and third and two outs. From my non-scout perspective, Tejada looks passive in the field as compared to prior seasons. He's not attacking the ball; rather, he's letting the ball play him. Conditions must improve.

It wasn't all bad for the Mets tonight. They scored eight runs in the first five innings. Collin Cowgill went 3-for-6, snapping out of a slump. Scott Atchison pitched two innings of scoreless relief. Justin Turner continued to produce, going 2-for-5 while starting in place of Ike Davis at first base. However, the Mets' offense went quiet in the second half of the game, just like in game one of the doubleheader. The RBI base hits dried up soon after Rockies starter Jeff Francis departed in the fifth inning.

This is easily the Mets' worst loss of the young season. That's "worst", all things considered. It lasted over four hours, was played in front of a sparse crowd in icy temperatures, featured late errors that cost the team the game, and completed a doubleheader sweep at the hands of the unimpressive Rockies. Oh, and that annoying purple dinosaur Rockies mascot "Dinger" was hanging around home plate again: 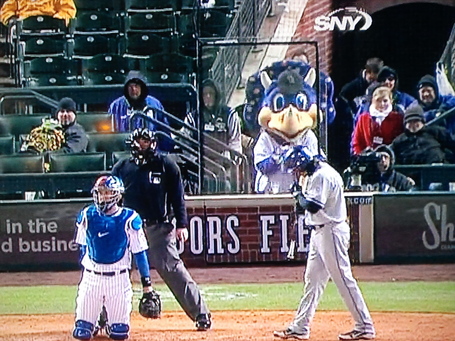 Kevin Burkhardt had enough of Dinger as well:

Also, if this game goes to the 11th, I'm going to punch Dinger in the face, just because.

Unfortunately, the game didn't go to the 11th inning. We'll see what happens between Kevin and Dinger the rest of the series. Bottom line, Dinger's gotta go.

The Mets played -- and some unlucky Mets fans watched -- close to seven-and-a-half hours of baseball today, with nothing to show for it. It doesn't look like Wednesday will be a day for redemption. The weather forecast calls for up to eight inches of snow by the 8:40 game time. If the forecast is wrong, and the game is played, the pitching matchup will be Jeremy Hefner vs Jon Garland.