A look at how the Mets minor league affiliates did on April 18, 2013

*All results from games played on Thursday, April 18th, 2013

Frustrated by the news of Travis d'Arnaud's injury, the Las Vegas bats pounded Sacramento for 13 hits and 10 runs en route to their second victory in as many nights. Wilmer Flores led the way with two hits -- including his first home run of the season -- a walk, and three runs batted in. Flores now has seven walks against just three strikeouts on the year. Juan Lagares continued his hot streak with another multi-hit game, his eighth in his last ten games. Darin Gorski had his best start of the year, walking none and striking out four over 5.2 innings.

Travis d'Arnaud's fracture is in a very difficult place for catcher, on instep. Will cost him significant time, second lost season.

So yeah, he ended the tweet with pretty much the last three words Mets fans would want to hear. Awesome.

The B-Mets knocked 11 base-hits and Tyler Pill went six solid innings as Binghamton won the opener of their series with the New Hampshire Fisher Cats. Pill ran into some trouble in the 3rd, allowing four hits, a walk, and two earned runs, but was able to limit the damage by getting back to back strikeouts to end the inning. He struck out six in six innings of work, both season highs. The Bingo Bats did most of their damage in the 6th, stringing together a few doubles to plate three in the frame. That may not have been the only damage done in the inning as Cesar Puello was suspiciously lifted for a pinch hitter. I'm of the opinion that injury karma is on our side at this point and this was just a harmless move.

It was not a good day to have been involved in the RA Dickey trade, as Noah Syndergaard got lit up over three innings in St. Lucie Thursday night. The St. Lucie bats did some lighting up of their own, highlighted by home runs from Matt Reynolds and -- for the the third night in a row -- Aderlin Rodriguez. Rodriguez appears to be a one-trick pony at this point in the season. On the other hand, Reynolds has been intriguing to this point, putting up a .285/.355/.411 triple slash. I'll be curious to see how he progresses, as well as if he can stick at short.

Brandon Nimmo finally cooled off a bit going 0-4 with two strikeouts as the Sand Gnats dropped the opener of their series in Lakewood, NJ. Gabriel Ynoa had the ball for Savannah and he put forth a decent effort going six innings while walking two and striking out three. Ynoa is probably the arm I am most excited about in the Sand Gnat rotation, mostly due to what he's done for his age -- he won't turn 20 until May. Jeffrey Paternostro was in attendance at this one and it does appear Ynoa has areas he can approve upon. In all seriousness, I'll be looking forward to seeing/hearing his reports after scouting Savannah the next several days. 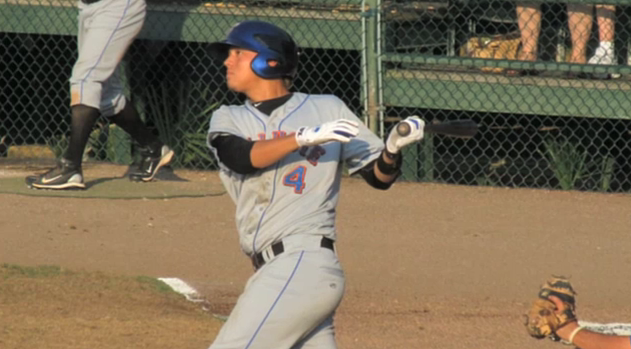 The 21-year-old Flores earned the no. six spot in the latest AA Mets Prospect Rankings.

The star of the night goes to Wilmer Flores for his fine night in the desert. It really is amazing how often he's been putting the ball in play this year.

The horns have to go to Noah Syndergaard and his seven earned runs in three innings. Acquired in the RA Dickey trade along with Travis d'Arnaud, Syndergaard had pitched pretty well in his two previous starts. However, on a day where Dickey left his start early and we found out d'Arnaud has a broken foot, it was inevitable that the horns would find their way to Noah.