As Mets fans lament another April where first baseman Ike Davis sputters out of the gates, it may prove instructive -- if not therapeutic -- to remember another first baseman who once struggled in the early going.

The 26-year-old Davis is currently batting .167. He has struck out in over 25% of his plate appearances. His batting average on balls in play is a miniscule .184. Is this all sounding familiar? Well, it should; from last Thursday's broadcast (click image to embiggen): 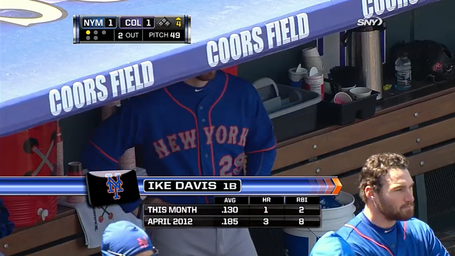 This is starting to become a thing. Writers are writing about it. His manager is answering questions on it. Four years into his big league career Ike Davis is in the process of being labelled a Slow Starter. And for good reason (revert to above image).

So is this just Ike? Is this something Mets fans just have to deal with year after year until the weather gets warm and he starts hitting -- much in the same way Angels fans dealt with noted Slow Starter Tim Salmon (to borrow a comp from Senor Burkhardt in the aforementioned broadcast)?

Or is this something Davis might grow out of? Is there any hope that on some sunny, yet brisk April afternoon not too far down the line Ike might not resemble Mr. Koo with a bat in his hands?

Well Mets fans don't have to stray too far to find another franchise first baseman who struggled to get out of the gates early in his career -- only to shake this annoying habit en route to what one might call a very successful baseball life. Also from Thursday's broadcast (it was a very good broadcast, allright?):

Gary: "Roger Freed was one of the great minor league players of all time."

Keith: "Yes, he played in Denver with Vern the year before. Hit 40-plus home runs at the old mile-high."

"But we opened up in Philadelphia, Gary. Three-game series. I hit a home run off (Steve) Carlton. After that I had like eight hits in the three games and hit two home runs -- and that was it."

Gary: "But is it different for you; you've won an MVP, you're already an established player? For the signs that he's shown in his career, he's still not that established and may not have the base to work off that you had as an older player."

Keith: "Well he would be right where I was at early in my career. But I didn't have 36 home runs in the second half -- I didn't have that behind me. I had good second halves, but it's different when you're in April and you look up at the scoreboard and you're hitting .130. You know? It's just different. You're embarrassed."

Gary: "Everybody goes 6-for-40 at some point, but if you do it in July nobody notices."

Interesting. Let's dig into the numbers a bit and validate some of those statements.

First off, just for kicks let's check out that supposedly pivotal Philadelphia series. So according to the story, come 1977 Vern Rapp took the reins in St. Louis. Ok, checks out. According to Keith, Rapp played the season prior in Denver (the Denver Bears) in the minors along with Roger Freed -- who hit '40-plus' home runs that year. All checks out. According to Gary, Freed was one of the all-time minor league hitters. With an .896 OPS and 225 career minor league home runs, that checks out. Sadly, so does Keith's statement that he died young -- 49 in fact. However, here's where the story goes off the tracks (click image to embiggen): 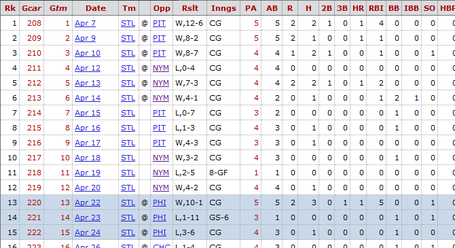 As we can see in the above 1977 game log (via Baseball Reference) St. Louis opened the season in Pittsburgh, not Philadelphia. They didn't travel to Philly until the fifth series of the season. He didn't have eight hits in any of those first five series. Though he did indeed homer in the first Phillies game, it didn't come off of Steve Carlton. Instead he homered off of journeyman starter Wayne Twitchell -- who appeared in 22 games for the Mets in 1979. Not quite as impressive.

Keith might have legitimately misremembered this fact, however, as he did indeed crush Carlton throughout his career. In fact, he impressively posted the most hits of any batter against Carlton (44) -- though his two homers against the Hall of Fame lefty came in '78 and '79.

I digress; back to the issue at hand. Keith batted a combined .296 in 16 major league seasons. His career mark in April/March was .276; not necessarily his best month, but certainly not cringe-inducing either. So what of those initial seasons?

Mr. Hernandez wasn't kidding -- like Ike, he too stunk it up in April during his formative years. In '74 he didn't get his first cup of coffee until August. But in '75 he entered the month of May the less-than-proud owner of a single extra-base hit and an OPS+ of a laughable 47. No home runs. A definitively worse performance than either of Ike's slow starts to date.

The following season wasn't much better as Hernandez compiled one less hit (9) and a still-slumbering .561 OPS. Still no home runs. It's fair to say that at this point Keith was an even slower starter than what we've seen from Ike of late -- especially since Davis can still hang his hat on a pre-injury 2011 where he batted .337 with a 1.014 OPS.

The numerical evidence definitely jibes with the anecdotal here. Our very own Keith Hernandez -- almost certainly the greatest first baseman in the history of the Mets -- once scuffled to start the season much in the same way that Ike currently does. But what exactly does that mean?

Strictly-speaking, it probably doesn't mean a hell of a lot. For one, aside from which batter's box they stand/stood in, the two men are/were markedly different hitters. Many of the tangible reasons for such early season slumps -- whether they related to swing mechanics, opposing pitcher's approach, etc -- likely varied drastically based on their drastically different styles.

What it does mean, however, is that at the most basic level this is not a reason to lose faith in Ike Davis. Regardless of the fact that we're talking about two very different ballplayers, there is most definitely a path to prosperity from where Ike stands. While it's not necessary the path that Mets fans had hoped for, Keith has clearly shown us that it can most certainly lead us where we want to go.