Despite the disappointing injury to Travis d'Arnaud, the Mets still have an impact hitter waiting in the wings in Nevada.

Wilmer Flores is no stranger to Mets prospect watchers. We've been talking about this kid for quite a while. How long? Here's what the front page of Amazin' Avenue looked like a few days after Flores signed (click image to embiggen):

To be precise it's been nearly six seasons since the youngster signed with the Mets as a bright-eyed 16-year-old out of coastal Venezuela, and much has happened since:

That brings us to 2013. At the age of 21 Flores is unsurprisingly one of the five youngest players in the Pacific Coast League. He's currently posting a respectable, if unspectacular, .279/.346/.397 line with a homer and one sort of random caught stealing.

But the part of his game that jumps out to me, the aspect that I find highly intriguing, is the plate discipline. As of Sunday night, Flores has eight walks and seven strikeouts. That's good for a sterling 10 percent walk rate and a truly outstanding 8.8 percent strikeout rate. The guy had three strikeouts through his first 15 career games at the Triple-A level and, thanks to a recent spate of whiffs, ranks only tenth-best in the league in strikeout rate.

While he's yet to truly break out the power bat thus far in 2013, this level of plate discipline in conjunction with a burgeoning power game is definitively rare at the minor league level. How rare? Reverting back to the 66-game sample he played with Double-A Binghamton in 2012, Flores was one of two players in all of minor league baseball under the age of 26 with at least 250 plate appearances, with a strikeout rate as low as his (11.1%), and an ISO as high as his (.186). 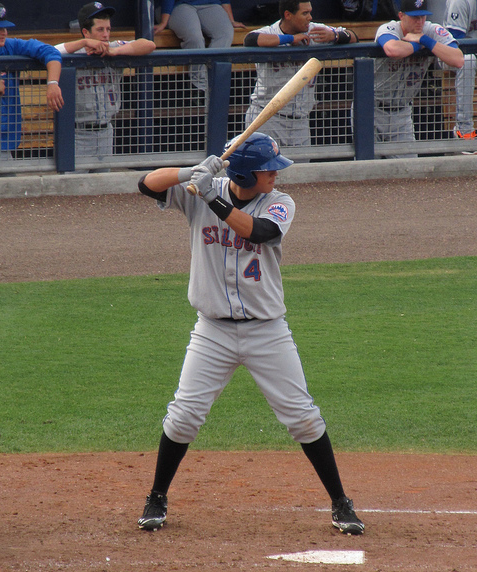 The other, you ask? Why, that was none other than BA's third-ranked prospect Oscar Taveras. Even if we expand our scope to 2011, we still only end up with two more rather conspicuous names: Rockies top three prospect -- and BA number 52, Nolan Arenado, and top ten prospect in the Braves' system, Tommy La Stella.

Were we to apply the same filters at the major league level, while understanding that these lofty figures represent a higher level of skills there, we'd find that not a single batter qualified in 2012. Yadier Molina and Albert Pujols were both close.

Such a combination of power and plate discipline is a thing worth attention. The ability to make such outstanding contact without compromising the ability to generate power sounds to any baseball fan like a fundamentally basic way to describe an above-average hitter at any level. And regardless of any defensive shortcomings, it seems clear that — especially when he eventually does become age-appropriate for his surroundings for the very first time in his career — that's exactly what Wilmer Flores will be for the Mets.