Getting to know Juan Lagares

What can we expect from the soon-to-be-promoted 24-year-old outfielder?

Share All sharing options for: Getting to know Juan Lagares

A recent report from ESPN New York indicated that Las Vegas outfielder Juan Lagares is on the verge of a promotion to patrol the vast expanses of Citi Field. So who exactly is the 24-year-old, shortstop-turned-outfielder? And what can we expect from him in his first major league gig?

Lagares was originally signed as an international free agent in 2006 at the age of 17. The Dominican infielder was a well-thought-of international prospect, though he signed in the shadow of the then-franchise record deal awarded to bonus baby Fernandez Martinez. Regardless, Lagares was an impressive prospect in his own right, showcasing much of the same natural offensive ability that garnered Martinez such notoriety.

In fact, the organization thought enough of Lagares to include him in their questionable method of aggressively handling their top prospects. Like Martinez and Ruben Tejada, Lagares found himself in full-season ball within a year of signing -- at the ripe old age of 18. Not surprisingly, the highly raw teenager floundered in his first go at Savannah. Competing against older players who already had a handful of years of pro baseball under their belts, he batted .210 with over three times as many strikeouts as walks. He did, however, continue to showcase the raw hitting skills and highly athletic tools that got him there in the first place.

Unfortunately, Lagares fell victim to a spate of nagging injuries over the next couple seasons which limited his overall playing time. That, paired with the aggressive assignments, most certainly lengthened the developmental curve and by 2009 his lack of defensive polish at short prompted a move to the outfield. In 2010 -- his fourth go-around with Savannah -- he posted a so-so campaign (.300/.318/.459 with five homers and 18 stolen bases) as he watched his prospect star dim.

Then came 2011. After years of being rushed and battling injuries short-circuited his dynamic offensive skillset, Lagares was finally able to catch up with his context and let his tools shine through in his first extended look in Advanced-A St. Lucie. Here's what I said about his breakout 2011 campaign in the 2012 AA prospect rankings:

"The 22-yr old Lagares blossomed in 2011, opening eyes with an excellent performance where he batted nearly .340 in Hi-A and then topping it with a downright incredible showing in his Double-A debut where he batted .370 in 38 games. And if that wasn’t enough he went on to post very solid totals out in the prospect-studded Arizona Fall League. In short, it was an excellent season."

Following another solid, though less eye-catching, season with Double-A Binghamton in 2012, Lagares opened the 2013 campaign in Triple-A Las Vegas as a member of the Mets 40-man roster. He's found the hitter-friendly environment of the Pacific Coast League decidedly to his liking as he's currently posting a .346/.378/.551 line with three homers and a pair of stolen bases while appearing in center field every day for the 51s.

As his Manager Wally Backman declared a couple of seasons ago, "He has a knack for getting the barrel on the ball."

In terms of what he'll bring to the Mets outfield, Lagares still hangs his hat on a very strong hit tool. In other words, as his Manager Wally Backman declared a couple of seasons ago, "He has a knack for getting the barrel on the ball." This means solid contact ability and while his over-the-fence power is average at best, he does have the kind of gap power that often places him amongst the league leaders in doubles. Though don't expect him to fit well into the organizational philosophy of getting on base; while he's shown some progress on that front in recent years, Lagares is currently posting a sub-five walk rate in Triple-A.

Lagares also brings a dimension of good, not great, speed that should deliver upwards of 20 stolen bases over the course of a full season. That speed also allows him to cover plenty of ground defensively. In fact, the stocky outfielder has come a long way since converting from short, to the point that there are instructors within the organization that feel he's on the level with, or even above, Matt den Dekker.

If you're looking for a comp, my favorite best-case version over the past few seasons has been Jon Jay; at his peak, a 15/20 athlete who can bat between .280-300 and handle center field on most days. More realistically, Lagares will appear on a more strategic basis for the 2013 Mets. What that means is that manager Terry Collins will potentially platoon the athletic Lagares between all three outfield positions, pitting him against left-handed pitchers -- against whom he has batted .344/.377/.527 over the past two seasons, not to mention a .971 OPS this April. 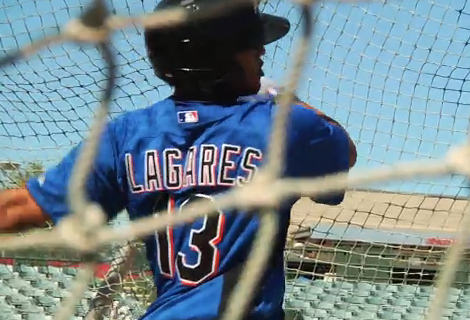 The 24-year-old Lagares earned the no. 24 spot in the latest AA Mets Prospect Rankings.

Finally, with that profile in mind it's not hard to pinpoint the outfielder(s) currently on the roster that are suddenly on the hotseat with Lagares' imminent promotion: The general sentiment is that 2013 bench-dweller Kirk Nieuwenhuis -- whose entire reason for making the club, as a defensive option, is questionable -- is likely to be Vegas-bound. In scattered appearances Kirk has compiled an anemic .125/.176/.188 line. Considering his longstanding label as a top prospect as well as the clear flaws that still exist in his game (see, 47.1% strikeout rate), he really does belong in Triple-A where he'll garner everyday at bats. It is fair, however, to suppose that Terry's 'everyday center fielder' Collin Cowgill might be on thin ice as well, considering that he's the current speedy, right-handed center field option and he's batting .171/.171/.257 since the second day of the season.

The Mets have officially announced the move to recall Lagares; via the Mets official Twitter feed:

Roster move: Outfielder Juan Lagares, who was hitting .346, was recalled from Las Vegas (AAA). Kirk Nieuwenhuis was optioned to the 51s.