Since the Dodgers left Brooklyn in 1957, New York City has kept a special place in its collective sports heart and mind. Fans captivated by the 1955 World Series Championship and the team’s perennial underdog status all dealt with their loss in different ways. When the L.A. Dodgers played their first game in front of a packed house of 78,672 fans at the L.A. Coliseum, many of the Dodgers faithful kept their heartstrings stretched 3,000 miles across the country. Others found a home in the Giants, and even a few with the once-hated Yankees. When the Mets arrived in 1962, though, the unattached members of Dodger diaspora had their own team to call home.

Over the years, the Mets have taken on the Dodgers’—and the Giants’—heritage to create a meaningful link between New York City’s rich baseball heritage and present day. With the Dodgers opening a set at Citi Field tonight, our partners at TiqIQ shared some interesting data on the Dodgers’ two visits to NYC this season to see what impact, if any, the Mets-Dodgers link has had on tickets prices for the series. 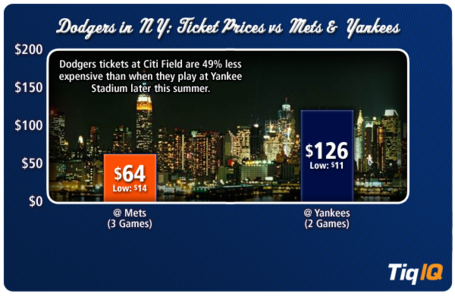 Not surprisingly, prices for the two Dodgers games against the Yankees in June are almost double the average ticket price for the Mets-Dodgers series that starts tonight. With four World Series match-ups since the Dodgers moved to L.A., the Yankees and Dodgers have a deeper shared on-the-field history than do the Mets and their predecessors. This is also the Dodgers’ first visit to the New Yankee Stadium, and the first time that Yankees fans will get to see former-captain Don Mattingly in Dodger blue.

For Mets fans, though, this is a critical series to create some breathing room between the team and .500. It’s also a chance to see some great baseball at very affordable prices on Mets tickets.