Jeremy Hefner and some solid Mets defense kept the score tied through seven innings, but the Dodgers broke through against Scott Rice in the ninth.

Share All sharing options for: Mets vs Dodgers Recap: Jeremy Hefner surprisingly effective, bullpen is not

Jeremy Hefner pitched fairly well in this afternoon's game, but he didn't start out that way. After jumping out to an 0-2 advantage over leadoff hitter Carl Crawford, Hefner went up and in to the extreme and plunked Crawford with a fastball. Hefner recovered to strike out Nick Punto and get a ground out from Adrian Gonzalez, but then Matt Kemp lined a single to left-center field to score Crawford, who had moved to second base on the Gonzalez grounder.

The 1-0 Los Angeles lead held up through the first five innings mostly because Korean lefty Hyun-Jin Ryu (pronounced /ROO/) was dealing. Ryu kept his fastball at the Mets' hitters' knees for the entire game and kept them off balance with his slider and changeup. New York did finally threaten in the fourth inning, when Lucas Duda's broken-bat single put runners on first and second with one out. However, that rally was short-lived, as Marlon Byrd grounded to third base for a 5-5-3 double play.

With just one hit through the first five innings, the Mets were struggling on offense, but Hefner kept on putting zeroes on the board. In the second inning, when Hefner walked leadoff batter Juan Uribe, the Mets escaped by turning a nifty 1-6-3 double play. Hefner fielded a Justin Sellers comebacker and flipped to Ruben Tejada for one out, who lobbed an awkward throw over to first base. Ike Davis was there to make a splendid leaping catch-and-tag to end the inning.

In the fifth, Hefner would get a 4-6-3 double play that helped him pitch around another walk to Uribe. The Mets' defense struck again in the seventh with Matt Kemp on first base and nobody out. Andre Ethier lobbed a fly ball to right field that Marlon Byrd went back to catch. Kemp tried to advance to second on the play, which seemed like a clever move until Byrd's throw to second arrived in time to nail Kemp and record the double play.

New York's offense finally broke through in the sixth inning to tie the score 1-1. Tejada started the frame with a walk and moved to second on Daniel Murphy's single. With David Wright at the plate, Tejada used some smart baserunning to advance his chances of scoring. Ryu bounced a pitch that was blocked by catcher Ramon Hernandez, but Tejada read the play well enough to dash over to third without a throw. That proved to be crucial, as David Wright hit a sac fly right after.

The Mets once again got Tejada and Murphy aboared with no outs in the eight inning, but this time Kenley Jansen was on the mound, and he had no trouble striking out Wright with a high fastball. After Duda flied out, Byrd also fell victim to the high fastball and the Mets had wasted their best chance to take the lead.

Scott Rice began the top of the ninth on the mound after he had gotten Carl Crawford to ground out to end the Los Angeles eighth. With big lefty Adrian Gonzalez looming on deck, Terry Collins opted to let Rice pitch to switch hitter Nick Punto. That turned out to be a decision fatal to the Mets' chances, as Punto lined a double up the right-center field gap. Rice stayed in the game to get Gonzalez to ground out and then he intentionally walked Kemp to set up the double play. However, the next batter, Andre Ethier, pulled a single to right-center that gave the Dodgers the lead.

Bobby Parnell entered the game to relieve Rice, but he could not put out the fire quickly enough. Uribe reached on an infield single to shortstop that allowed Kemp to come home with Los Angeles' third run. That turned out to be a big one because Ike Davis led off the Mets' half of the ninth with a home run off of Brandon League to make the score 3-2. League then retired the next three Mets in order to end the game and hand New York its first home series loss of the season.

Random Stuff: All three of Hefner's walks were to Uribe, who has a career .296 on-base percentage. Also, Collin Cowgill finally recorded his first base-on-balls of the season when Ryu walked him in the fifth inning. 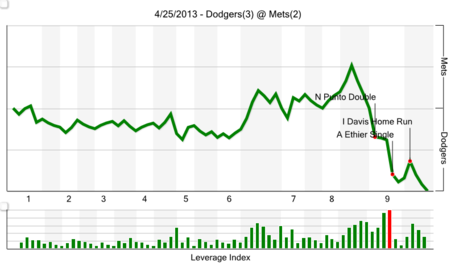