A look at how the Mets minor league affiliates did on April 25, 2013

*All results from games played on Thursday, April 25th, 2013

Las Vegas played for the first time since Sunday, and while the bats displayed no rust, the same cannot be said about the bullpen as they allowed seven runs in the top of the ninth to blow a four run lead. It was supposed to be a match up of marquee pitching prospects but Andrew Kittredge* got the spot start for Tacoma, replacing Danny Hultzen who was a late scratch. The Mets' half of that match up, Zack Wheeler, struggled out of the gate giving up back to back doubles to start the game. He settled down and was on cruise control until the fifth, where he ran into all kinds of trouble. A home run, a couple walks, a single, and a double put a damper on what looked like the start where Wheeler put it all together. He came out for the sixth and further dampened his outing by giving up a massive home run and hitting a batter before being pulled. The stat line looks a bit worse than reality here. Wheeler was absolutely dominant through the fourth inning. He hit 99 several times and was mostly sitting 95-98 with his fastball. There were some fantastic sounding breaking balls, I can only guess as to what they looked like due to the poor camera angle on the Vegas MiLB video feed. Wheeler struck out the other top catching prospect in baseball, Mike Zunino, three times. So, all is not lost. Overall, I would say this start was a step in the right direction.

* Each utterance of "Kittredge" had me thinking CLEAR AND PRESENT DANGER! but then around the third inning I realized it was actually Mission Impossible I was thinking of. Same guy though

Binghamton had the night off on Thursday. The B-Mets open a series against Akron tonight with Rafael Montero taking the mound.

St. Lucie got their butts kicked in this one but it was not the fault of Domingo Tapia, who went 5 2/3 innings, giving up two earned, walking two, and striking out five. Tapia has bounced back nicely from his disastrous start on April 11th. Since that outing he has gone 18.2 innings, giving up four earned runs on 13 hits while walking just four and striking out 19. Yes, please. On the other side of the ball, the St. Lucie offense continued to underwhelm. Thus far, there just is not a lot to get excited about in this lineup.

The Sand Gnats beat Delmarva Thursday night behind strong pitching and power hitting from two of the three usual suspects. Gabi Ynoa led the way with six and a third excellent innings, allowing one earned run while striking out six and walking one. Apparently, he was displaying some feel for his slider and changeup, which is encouraging. And oh, by the way, his 20th birthday is a month from today. Speaking of age, are Kevin Plawecki and Jayce Boyd too good for this level, or merely too old? After doing some crude research, it seems the average age of the South Atlantic league is somewhere just south of 22-years-old. Both Plawecki and Boyd are a few months past their 22nd birthday. So, yes, they are a bit old for the level. Now, the average age for the high A Florida State league -- where St. Lucie plays -- is somewhere between 22 and 23. It seems they won't be playing at an "age appropriate" level until they move up to St. Lucie. This is a long way of saying we should temper our excitement about these two. Should we also wonder if there is a point in keeping them down in Savannah? Small sample size and all that, but it seems they can handle A ball. To cap off our age discussion, 20-year-old Brandon Nimmo went hitless in five trips with a strikeout. A recent spate of strikeouts has his strikeout rate up around 21%, which -- while an improvement upon last year and a decent rate for someone as raw as Nimmo -- is still too high for my liking. 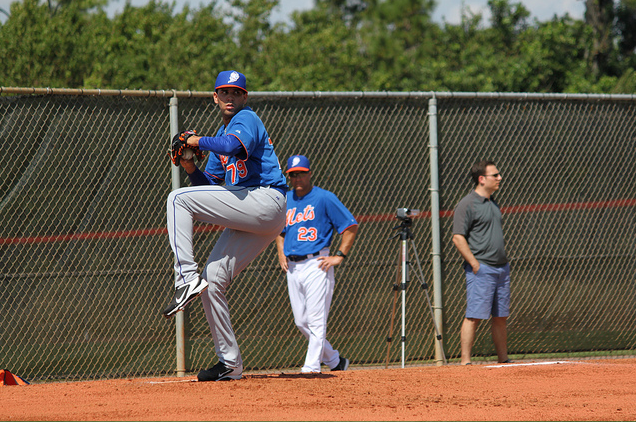 The star of the night goes to Gabriel Ynoa for pitching into the seventh while striking out six, walking one, and allowing a single earned run. Keep it up, kid.

Greg Peavey gets the goat horns for playing the biggest hand in blowing the game out in Vegas. He inherited a two on, none out situation but the four batters he faced went, single, walk, walk, walk.