What kind of season will Matt Harvey have? Provide your own projection.

(click to embiggen; also, the "Harvery" thing will never get old)

That was in 2010, before Harvey's scorching MLB debut last summer, when he started the transition from top prospect to successful major leaguer. Striking out 70 batters in 59.2 innings while posting a 2.73 ERA at age 23 will ensure the correct spelling of your name in Mets spam e-mails: 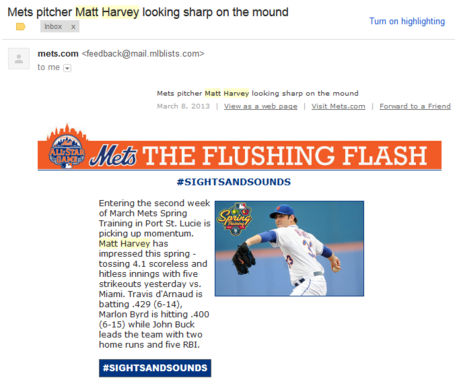 Harvey exceeded expectations in his two months with the big club last season. Few expected him to get lit up, given his success at Double- and Triple-A. But a 10.62 K/9? A 12.0% swinging-strike rate? Not many could have predicted that. For 2013, the projection systems all peg him at least a run above his 2.73 ERA in 2012, and that seems fair. Conservatism is king with projections. Batters who faced him during his first trip around the league will make adjustments. Scouts and coaches have more footage to look at. There will be growing pains. That said, Harvey has star potential. His 80-90% projections place him in All Star and maybe even Cy Young Award territory. I wouldn't bet on him making that big jump in 2013 but the talent is there. If things go well, Adam Rubin's infamous anonymous scout might regret this pre-MLB debut assessment of Harvey:

"Pelfrey without the split or breaking ball"

Harvey's curveball and slider were both sharp late last summer, but there's certainly room for improvement there. His changeup remains very much a work in progress. Stamina is also something to watch for; he averaged just under six innings per start during his big-league stint last season. Improved length should follow improved command. I'll take the over on "Pelfrey without the split or breaking ball" both in 2013 and beyond. Post your Harvey projection in the comments in the same format as below. I'll compare our projections to actual results at season's end.