Mets vs. Marlins Recap: Nothing to see here, move on

A Mets starter was three outs away from a complete game shutout. But we can't have nice things, can we?

Share All sharing options for: Mets vs. Marlins Recap: Nothing to see here, move on

I usually try to think of themes for these full recaps. Some kind of conceit that can run through it, a thread that ties the narrative of the story together. I introduce it here, and I do a callback at the end, because I'm clever like that. I like to believe that every game has its own story arcs, its own novelistic ups and downs, drama, comic relief...

You know what? This game doesn't deserve it. If most games are novels, this one was a pamphlet shoved at you as you exit the subway by an angry street person in a tinfoil hat. This game knows what it did. I'm not mad at you, This Game. I'm just disappointed.

The Mets picked up right where they left off early Tuesday morning, doing very little against Marlins starter Kevin Slowey in the early going. Lucas Duda snuck a single into right to start the second, but Daniel Murphy bounced into double play to erase him. Ike Davis then singled, but Anthony Recker (catching in place of John Buck, who spent all 15 innings of Monday's debacle behind the dish) could only offer a weak strikeout on a pitch in the dirt. Then it was back to form, as the Mets went down 1-2-3 in the third and fourth, and Slowey expended very few pitches in the effort.

The Mets' five-game skid forced Jeremy Hefner into the role of stopper, and he took to it well. Hefner started by retiring the Marlins on only six pitches in the bottom of the first. The immortal Greg Dobbs led off the second with a single, of course, but Hefner benefited from a double play grounder from Justin Ruggiano, then struck out rookie Marcell Ozuna. In the third, Hefner grazed the jersey of Nick Green with one out, but then saw Slowey foul bunt his way into a K, then induced an inning-ending groundout from Juan Pierre. Donovan Solano dunked a single into right to begin the fourth, but got Placido Polanco to bounce into another GIDP, and also managed to retire Greg Dobbs, destroyer of worlds on a foul out.

Then, everyone's naps were rudely interrupted by a rally, or the closest thing to one that either of these teams could manage. Murphy led off the top of the fifth with a double down the left field line, then moved to third on a long fly to center by Davis. Recker followed with a line drive to left that Pierre picked off, but thanks to the state of Pierre's arm, Murphy was able to tag up and score easily.

With this heart-pounding action in the rearview, the Mets' offense slouched back toward futility, going down in order in the sixth, bypassying a one-out Duda double in the seventh, and exiting 1-2-3 once more in the eighth. New York batters seemed okay with making Slowey look like Nolan Ryan, allowing the veteran righty to rack up eight strikeouts through the first eight frames.

Luckily for the Mets, the Marlins were committed to doing the same for Hefner over that stretch. Hefner worked around a one-out single in the bottom of the fifth by the rookie Ozuna, his first in the bigs. When the ball was taken out of play, a teammate pulled the ol' switcheroo and tossed another ball into the stands, doing it so quickly I was sure he'd thrown away the real one. Well done, sir. Hefner was perfect in the sixth, seventh, and eighth, tallying eight Ks of his own to that point.

Ryan Webb took over for Slowey in the top of the ninth and returned similar results as he did not allow a Met to reach base. But it appeared as if Hefner had the situation well under control as we strolled into the bottom of the ninth. You can take your pick as to which was more foolhardy: trusting Hefner to close things out, or trusting the Mets to do anything right.

Pinch hitter Chris Coghlan led off the bottom of the ninth with a single. But the sense of impending doom didn't truly rear its ugly head until Recker allowed a high pitch to get past him, moving Coghlan to second.

With the tying run now in scoring position, Pierre dropped down a bunt right in front of the plate. Recker made the unwise decision to try and gun down Coghlan as he ran toward third. The catcher's throw was late, but David Wright stayed with the play and appeared to tag out Coghlan when the runner slid past the bag. And when I say Coghlan slid past the bag, I mean there was a point at which you could have slide a grapefruit between his foot in the bag. The third plate ump Tim McClelland adopted a more rock n' roll approach to the rules and decided not to harsh Coghlan's mellow. Loud protests from both Wright and Terry Collins fell on deaf ears.

With runners at the corners and nobody out, Hefner was forced to exit in favor of...does it matter, at this point? Does it really matter who comes out of the Mets' bullpen anymore?

If you must know, Brandon Lyon took the hill. Lyon got ahead of Donovan Solano, fell behind, then gave up a single on a hit and run play that scored the tying run and put Pierre at third with the winning run. At this point, the only reason to keep watching was to see what head-smackingly stupid method the Mets would choose to lose. Balking home the winning run? Walkoff catcher's interference? Running into the clubhouse and forfeiting?

Placido Polanco was walked intentionally walked to put a force at any base, and I naturally thought that walking in the winning run was the logical next step. Lyon decided to go for efficiency and uncorked a wild pitch to score Pierre and send all of Miami's 17 fans home happy. There are many ways the Mets could have lost their sixth game in a row, and this is certainly one of them.

In other news, I think I might hate baseball now. 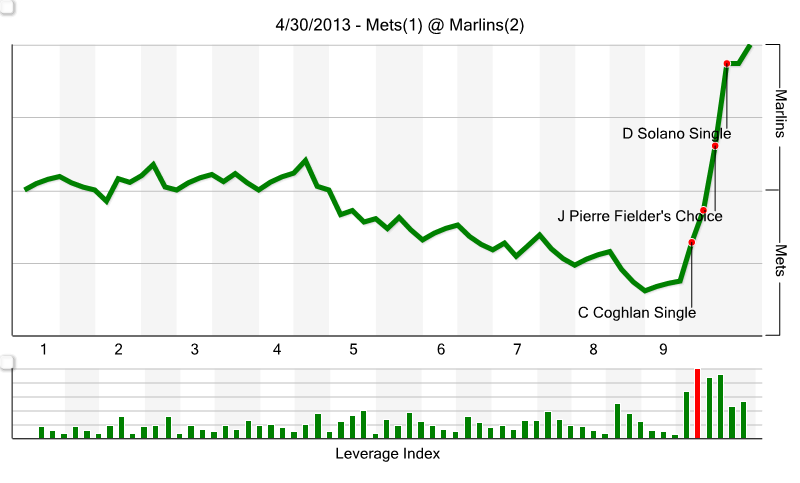