The Mets won 8-4 behind a terrific outing from Matt Harvey and three longballs from the lineup.

When we last saw Matt Harvey in the regular season, he was dominating the Phillies late last September in what was probably his best start of 2012. He picked up in 2013 right where he left off, allowing no runs and just one hit against the Padres tonight over seven commanding innings. Harvey struck out ten, walked two, and surrendered only a handful of hard-hit balls. He even picked off one of the few batters to reach base against him. It was a pleasure to watch. 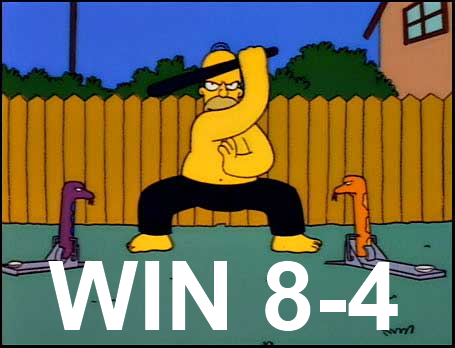 Harvey came out throwing gas right from the get-go. He touched 97 mph with his fourth pitch of the game and struck out the first two batters he faced before inducing a pop-out to finish the first inning. He needed just nine pitches to complete the frame, which was a harbinger of things to come. By the time he left the game, Harvey had induced 24 swinging strikes out of 94 pitches, good for a fantastic 26% rate. For comparison, Harvey's swinging-strike rate in 2012 was 12%, and Cole Hamels led MLB starters last season with a 13% rate. Harvey did much of the damage with his fastball but his secondary offerings were also humming at times. Observe this slider delivered to an overmatched Jedd Gyorko (via .gifmaster Carson Cistulli; mouse over image to watch):

Concern that Harvey might have trouble getting loose in the cold Flushing weather was extinguished with each blazing fastball. The young man didn't seem at all fazed by the 40-degree temperature, and he confirmed as much after the game:

Harvey on the cold: "In my mind, a jacket doesn’t belong on a baseball field." #Mets

We'll see if he changes his mind next week in Minnesota.

Lucas Duda gave Harvey a 2-0 lead in the second inning when he smacked a two-run home run off underwhelming Padres starter Clayton Richard. Duda also added a well-struck double and drew a walk. John Buck hit a two-run home run of his own to the opposite field to give the Mets a 4-0 lead in the fourth inning. After David Wright drove home Daniel Murphy with an RBI double in the fifth inning, Ike Davis crushed a two-run home run out towards the Shea Bridge in right-center field to give the Mets a sizeable 7-0 advantage. Buck capped the scoring with an RBI single later in the fifth inning to make it 8-0.

Richard is a southpaw, so Duda and Ike's home runs are encouraging, given their past struggles against left-handed pitching. Ike's home run was also his first hit of the year. Much like his trips to the plate on Opening Day, he didn't look good in his first two plate appearances tonight. Each lasted one pitch and ended in an unimpressive swing and weak ground out. In his third plate appearance, he again swung at the first pitch, that time fouling it off. Two pitches later, he hit a hanging meatball of a slider from Richard way out of the park. Perhaps Ike was playing the long con on Richard, lulling the pitcher into a false sense of security based on some ugly plate appearances. Or perhaps he just finally got a pitch he could rip.

The Mets bullpen and Ruben Tejada combined to provide Mets fans the first bit of stress this season, even if the game never really seemed in question. Side-arming Greg Burke made his season debut in the eighth inning and allowed a run in two-thirds of an inning of work. Josh Edgin recorded an out on one pitch to close out the frame. LaTroy Hawkins also made his debut, starting the ninth inning with an 8-1 lead. He departed after giving up three runs and notching two outs. Two of the runs were unearned, however, as Tejada made a throwing error on what would have been the final out of the game to extend the action. Ike probably should have done better to pick the low throw but it's an "E" in the books for Tejada. Bobby Parnell was called on to finish things, and he did, retiring the only batter he faced to put it in the books. 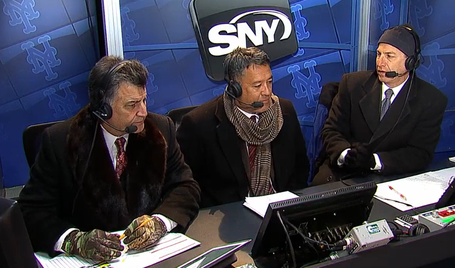 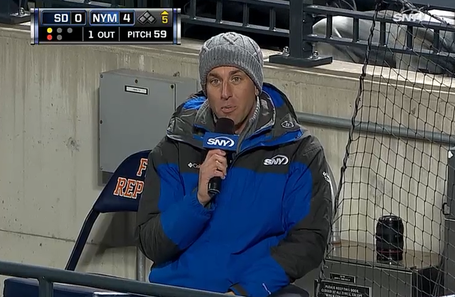 The Mets will try tomorrow for a season-opening sweep for the second year in a row. Game time is 1:10 pm and the pitching matchup is Dillon Gee vs lefty Eric Stults.

Unintentionally sexual quote of the game: "Of course, David's pretty good at catching balls in his bare hand." -- Gary Cohen (via Catsmeat) 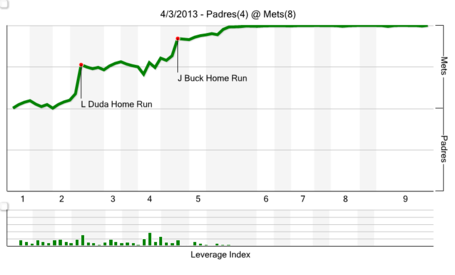