Mets vs. Padres Recap: Mets whiff at making Dillon Gee a winner in his comeback

Dillon Gee allowed just one run in his first start back from emergency shoulder surgery last summer. That was one run too many.

Share All sharing options for: Mets vs. Padres Recap: Mets whiff at making Dillon Gee a winner in his comeback

The last time Dillon Gee took the Citi Field mound, he fired eight innings of one-run ball against the Cubs on July 7, 2012. It wasn't his best start of the season by game score (though it was close) and plenty of pitchers had their way with the 101-loss Cubbies last year. Still, it was a mighty fine performance and seemingly another step in Gee's maturation into a dependable major league pitcher.

Three days later, his hand turned purple. Tests revealed a blood clot lodged in the artery of his throwing shoulder. Just like that, what was shaping up to be a career year ended abruptly on the operating table of a hospital near his St. Louis home. 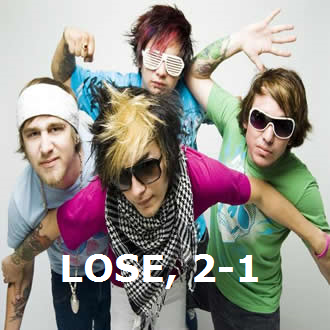 Gee toed Citi Field's pitching rubber for the first time since his health scare this afternoon, and he picked up pretty much where he left off, tossing six and one-third innings of one-run, three-hit ball against the San Diego Padres. Gee's velocity was down a bit from last year, peaking at just over 89 mph, and his control wavered, but it was still an encouraging performance overall.

Less encouraging was the Mets' offense. After erupting for 19 runs in the first two games of 2013, Mets batters regressed hard today, scoring just one run on five hits against six Padres pitchers. Lefty Eric Stults got the start for the Friars and set the tone early. In the first, he posterized David Wright and Ike Davis with called strike threes. An inning later, he got Marlon Byrd and Lucas Duda swinging. It was a particularly rough day for the Dude to abide, as he was caught looking two more times for the hat trick. Lucas had company in the K corner, however. The heart of the Mets order, batters three through six, combined to whiff eleven times in 16 plate appearances. All told, Padres pitchers struck out 14 on the afternoon.

As for the Padres' bats, they were once again cold, but the team strung their hits together. All the safeties Dillon Gee allowed came within a span of three batters in the fourth. Mark Kotsay and Yonder Alonso singled with one out, while Jedd Gyorko tapped a grounder just beyond David Wright's reach for an RBI double. That was only scoring for either side until the top of the eighth when Jeurys Familia made his first appearance of 2013. He prompty presented the Pads with something of an inverse Reyes run. Familia walked leadoff batter Chris Denorfia, gave up a single, then unleashed a slider with the almost exact trajectory of the pitch that upended Mookie Wilson in Game Six of the '86 World Series. Denorfia trotted home from third as easily as Kevin Mitchell did to give San Diego an insurance run.

The run came in handy, too. Facing Padres closer Huston Street In the ninth, John Buck finally got the Mets on the board with an bomb of a home run off the facing of the second deck high above the Great Wall of Flushing in left field. For Buck, it continued his uncanny "Rod Barajas circa 2010" impression. Or perhaps Rod told Buck personally that bunching your home runs together at the beginning of the season is a sure-fire way for a low-OBP backstop to buy some goodwill prior to the inevitable five-for-50 slumps to come. Presumably that's the kind of small talk that goes on at Brotherhood of Backup Catchers meetings. In any case, Street retired the next three batters without incident and hung the Mets with their first loss of 2013.

While an opening series sweep for the second straight year would have been nice, in the words of the bard said, two out of three ain't bad. If the Mets can continue to make teams play from behind, as they did for 21 straight innings against San Diego, there will be plenty of reason for optimism in addition to Dillon Gee's solid return.

Oh, also the Marlins come to town tomorrow and they've scored all of one run so far this season. Yet another reason for Mets fans to smile. Jeremy Hefner takes the ball for his first start of the year at 7:10 p.m.

Unintentionally sexual quote of the game: "There's framing when you're a catcher, and then there's yanking." – Josh Lewin 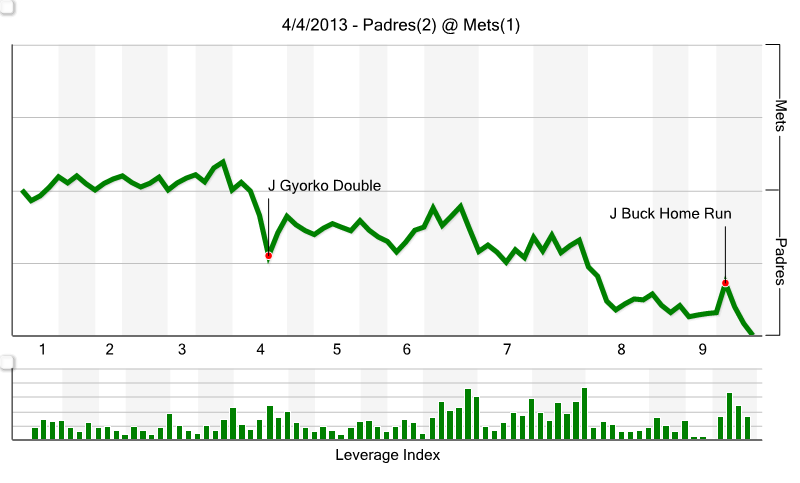