Doesn't it feel like just yesterday that we were bidding the 2012 recap season a wistful farewell? Well never fear; the Amazin' Avenue minor league team is back in the saddle for another season in 2013! Here to provide you every detail on all of the daily goings-on around the Mets system. Daily reports chock full of all the prospect-y goodness you can possibly handle.

For those of you new to the excitement this season, the daily farm report is your one-stop shop for all of the stats and storylines from last night's minor league action. Look no further than this very spot each and every morning for the very best way to maintain a pulse on all of the club's top prospects. In addition to daily box scores you'll also find prospect polls, exclusive photos, video, and first-hand scouting reports.

I'd also be remiss if I did not mention perhaps the most important feature of the daily farm reports -- the highest quality of user-based commentary and discussion about Mets prospects on the Internet. For anyone looking to increase their knowledge on the system, there's really no better way than to monitor and engage the comments section each day. It's no surprise that the recap team is made up entirely of users that have graduated into administrative roles.

So now without any further ado, let's officially break the seal on the 2013 season and get to the games!

*All results from games played on Thursday, April 4th 2013

Get used to this sort of box score from the Mets newest minor league affiliate. The 51's certainly had their hitting shoes on last night, though for the record Sacramento is actually the most run-suppressing environment in the Pacific Coast League. Regardless, this is a lineup that clearly possesses some punch, headlined by Travis d'Arnaud -- who introduced himself to the system in a big way by reaching base four times, including a pair of doubles. For anyone silly enough to stay up and watch the MiLB broadcast -- on a school night no less! -- it was pretty apparent that the stout righty's quick hands should give him no trouble with high-end heat.

Speaking of high-end heat, Zack Wheeler was on the mound last night -- though he didn't quite find as much success in his 2013 debut. In fact, Wheeler showed you exactly why calls for his immediate promotion to the majors were and are silly. The 22-year-old clearly didn't have a great feel for the curveball and consistently got behind batters all night long, throwing only 59% of his pitches (51 of 86) for strikes. Though his plus fastball mostly bailed him out, the inability to work economically and pitch deep in games will be his biggest hurdle in proving he's ready for the show.

Who was that dummy on the latest AA Audio podcast that said we should temper our enthusiasm on Rafael Montero? The 22-year-old righty showcased more of the same outstanding stuff that had scouts drooling all spring, striking out nearly half of the batters he faced, allowing just a pair of singles, and tossing 75% of his pitches for strikes (63 of 84). In fact, of the 19 batters he faced Montero managed a first-pitch strike against 15 of them and only entered into a count with two or more balls five times all evening. The big question for Binghamton this year will be whether Montero and the rest of the talented rotation will be able to keep pace with a B-Mets lineup seriously hurting for some pop.

2012 Cyclones sensation Hansel Robles began the evening a little bit anticlimactically, allowing a home run to Hammerheads' leadoff hitter Isaac Galloway. However, he quickly gained traction by striking out five of the next 11 batters he faced. However, another leadoff homer in the fourth got him untracked a bit and a few batters later the 22-year-old righty actually left the game with an apparent arm injury. No word yet on the severity of the injury; however it randomly came on the heels of a botched pickoff to first base, whether that was related or not.

Tons of credit goes to the St. Lucie bullpen in this one who took the baton and ran. There may not be a ton of prospect luster between Estarlin Morel, Jim Fuller, and T.J. Chism but the troika provided 5.2 innings of scoreless, two-hit, nine-strikeout relief to close this one out.

Like many of the full-season affiliates in 2013, Savannah is a lineup lacking in too much offensive firepower. Guys like Brandon Nimmo, Kevin Plawecki, and Phillip Evans are going to have to get the most out of their ability to keep the Gnats in contention this summer. And on a night like this one where the combination of starter Matthew Bowman and two relievers were so-so, it's going to be a tough row to hoe. On that note, I was a bit surprised to see Bowman -- he of the one career pro start -- get the Opening Day nod with a handful of talented 2012 Cyclones starters on the staff. 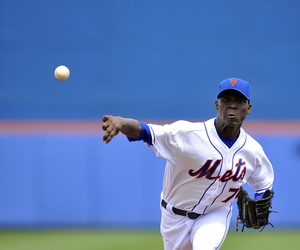 The 22-year-old Montero earned the no. eight spot in the latest AA Mets Prospect Rankings.

Let's go with Rafael Montero on a night when he makes me look stupid for 'trash-talking' him just 24 hours earlier. Now trash-talking for Montero just means that I advocated pumping the brakes a bit on the talk of a future stud -- and I still do. As impressive a mix of bat-missing stuff and pinpoint command as Montero features, he still projects to a mid-rotation ceiling -- which is obviously no insult. However, as evidenced by the 2:7 GB-to-FB rate, there's still some margin of error for better hitters to take advantage of -- at least at the very highest levels.

For our first goat of the season we'll head west and pick on Armando Rodriguez, who started his campaign on the wrong foot by allowing a couple of hits followed by the dreaded three-run bomb. The big-bodied righty is coming off a solid 2012 campaign where he posted a 3.22 ERA in Binghamton, striking out 77 batters in 72 innings. However, despite those strong numbers the 25-year-old is clearly losing traction in the organization as he went unprotected before the Rule 5 draft and did not receive an invite to major league spring training this year.

Phillip Evans deserves some horns as well on a night where his errors outnumbered his trips to first base.