Mets vs. Marlins Recap: Tejada's error combines with shoddy relief pitching to put a victory out of reach

The Mets couldn't use their bats to dig out of the bullpen's hole in Friday's loss to the Marlins.

Share All sharing options for: Mets vs. Marlins Recap: Tejada's error combines with shoddy relief pitching to put a victory out of reach

After two games, two victories, and nineteen runs scored to open the season, Mets fans got a taste of some promising early season victories. Fast forward two days later and the club finds itself back at the .500 mark as their offensive woes and bullpen question marks reared their ugly head. The Mets' 7-5 defeat at the hands of the Marlins was sort of like two games in one. Throughout the first six innings, you had a pitcher's duel between Jeremy Hefner and 24-year old right hander Alex Sanabia, who the Mets couldn't seem to figure out. From the seventh inning on, the bullpens came in and gave up plenty of runs but in the Mets' case, they gave up just a few too many. 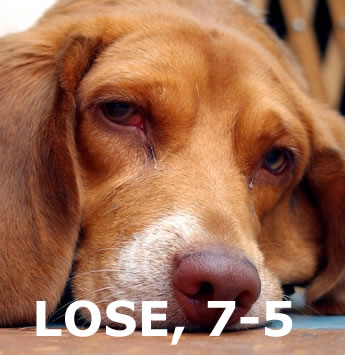 On the pitching side, Jeremy Hefner did a very nice job for the Mets over six innings, allowing just a single run on five hits, while walking two, and striking out three batters. The lone run off of Hefner came on a solo home run by the hated Greg Dobbs, who deposited a 3-1 hanger into the right-center field bullpen area. The game held at 1-0 through six innings, though the Mets had plenty of opportunities all night as they had runners on base in every inning. In the first, the Mets had runners at first and second with one out erased by an Ike Davis double play. Twice they had rallies that died with two outs and the pitcher Hefner at the plate. Jordany Valdespin even got picked off, stifling what could've been a productive inning. Kudos to Alex Sanabia, who hadn't thrown a big league pitch since 2011. Sanabia allowed 6 hits, 3 walks, and only struck out one but was able to tip-toe out of any trouble he found himself in.

The top of the seventh inning got off to an ominous start for the Mets and reliever Greg Burke, as Ruben Tejada misplayed, bobbled, and then threw away Donovan Solano's easy groundball for a leadoff error. Burke would then proceed to walk pinch hitter Austin Kearns to put runners on first and second with nobody out for Juan Pierre. Pierre, looking to sacrifice, bunted the ball right back to Burke who tried to get the lead runner Solano at third. Unfortunately, Solano got a great jump off of second base, beat the throw, and everybody was safe. With the bases loaded and nobody out, Placido Polanco lined a single into right field, making it 3-0. After striking out Giancarlo Stanton, Burke was removed for Scott Rice who managed to allow three more runs to cross the plate, expanding the deficit to 6-0 heading into the bottom of the 7th inning.

In the Mets' half of the seventh, they put two runners on base for Daniel Murphy who unloaded on a home run to left center field, his first of the 2013 season. Yes, you read that right. An opposite field bomb for Daniel Murphy. That cut the Marlins' lead to 6-3 and an inning later, the Mets found themselves within striking distance. With Murphy at the plate again, this time with the bases loaded, the Irish Hammer bounced out to second base, ending the potential rally. The top of the 9th saw Terry Collins turn to LaTroy Hawkins and the righty allowed the Marlins to get an insurance run, which easily could've been insurance runs had Jordany Valdespin and Daniel Murphy not combined to throw out Placido Polanco at home plate on a Giancarlo Stanton laser beam double to center field. Still, a 7-3 deficit proved to be far too much and while the Mets did manage to plate a pair of runs against Steve Cishek in the bottom of the ninth on a Kirk Nieuwenhuis double and a Lucas Duda single, Justin Turner grounded out weakly as a pinch hitter for Tejada to end the ballgame in defeat, sealing the first victory of Marlins' manager Mike Redmond's career. 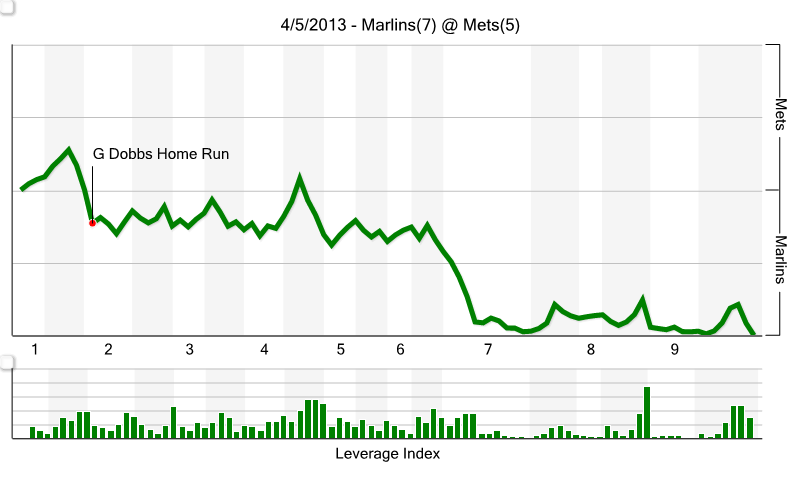