Saturday afternoon's game between the Mets and the Marlins began with a Juan Pierre seeing-eye single. Pierre advanced to second on a ground out and to third on a fly out to right. He then scored easily when Greg Dobbs — Greg freakin' Dobbs — flicked the ball down the third base line. 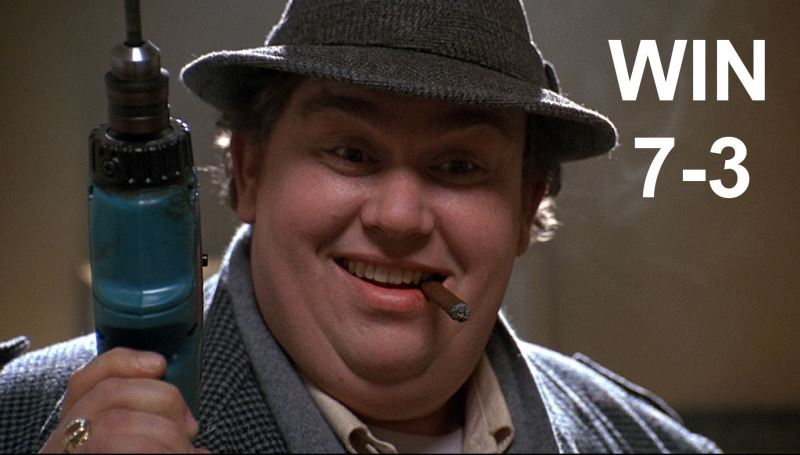 The Mets were able to tie the game in the bottom of the first, though. Mike Baxter led off with a walk, and after a Daniel Murphy strikeout, David Wright and Ike Davis each singled to load the bases with just one out. John Buck stepped to the plate and drove in a run with a routine sacrifice fly. The Mets didn't score another run in the inning, but scoring one run after loading the bases with one out is preferable to scoring zero runs. And Buck's day of driving in runs was just beginning.

From there, Niese was slightly inefficient but effective through the rest of his six-inning start. In the fifth inning, though, he fell victim to Ruben Tejada's throwing woes, which were in full effect in the early innings of the game. With runners on first and second and one out, Niese induced what should have been an inning-ending double play off the bat of Dobbs.

When the slow grounder reached Daniel Murphy near second base, he opted to flip the ball to Tejada, whose rushed throw came up a bit short of first base and wasn't scooped up by Davis. In fairness to Tejada, Davis could have made up for the poor throw had he made the relatively routine pick at first. Placido Polanco, who was on second to begin the play, scored to give the Marlins a 2-1 lead.

The lead didn't last long, though, as the Mets scored twice in the bottom of the sixth. Wright and Davis hit back-to-back one-out singles and stood on first and third base for John Buck, who proceeded to hit a hard groundball double down the third base line to put the Mets ahead 3-2 for their first lead of the day.

Having thrown 100 pitches — 14 of which were swinging strikes — in six innings, Niese's day was done. His curveball looked as good as it's ever looked, and he threw 24 changeups in the outing.

Scott Atchison took over for Niese in the seventh, and Juan Pierre led off with a single. Two outs later, Pierre was standing on second base, and Josh Edgin came in to face Dobbs, who, of course, singled to bring home Pierre and tie the game. The inning came to an end on the play, however, as interference was called on Pierre as he awkwardly took out John Buck — who was several feet from home plate to snag Mike Baxter's wide throw to the plate — as Buck attempted to throw to second to get Dobbs.

After Jordany Valdespin led off the bottom of the seventh with an out, Baxter drew another walk. He then stole second base and advanced to third when Miguel Olivo threw the ball into center field. Daniel Murphy tripled to deep right-center field, easily scoring Baxter to put the Mets back in front. David Wright singled to plate Murphy, and he, too, stole second and advanced to third on an Olivo throwing error. Miami intentionally walked Davis, but John Buck hit another sacrifice fly to score Wright, and the Mets were up 6-3.

Brandon Lyon pitched a scoreless eighth inning, striking out two and allowing just a single in the process. In the bottom of the inning, Collin Cowgill hit his second home run of the season, a solo shot that gave the Mets a little bit of insurance. Even though the coveted save situation was erased, Bobby Parnell came on in the ninth and set the Marlins down in order for the win.

Aaron Laffey makes his Mets debut tomorrow afternoon at 1:10 pm as the team looks to take the series from the Marlins, who will start Jose Fernandez, their top pitching prospect who's never pitched above Single-A. 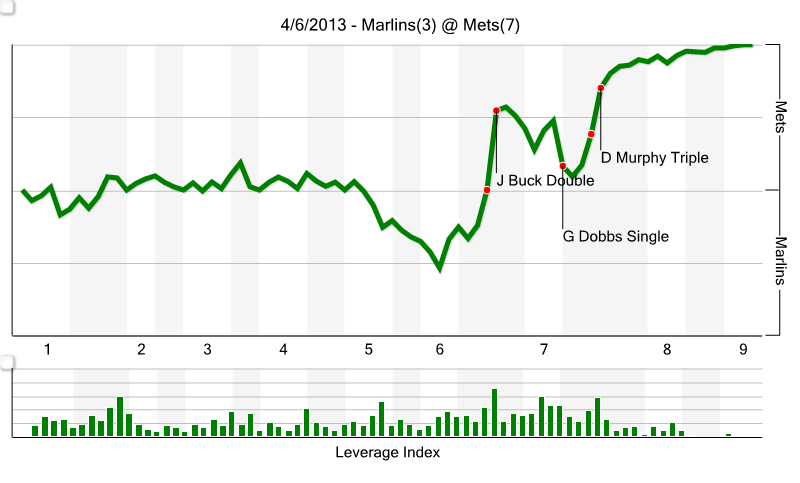