Daily news and notes from around the Mets minor league system.

*All results from games played on Saturday, April 6, 2013

The B-Mets claimed their third consecutive victory at Canal Park with 7-5 win over the Aeros. Darrell Ceciliani's one-out triple in the first was followed by Josh Rodriguez's single to give the Mets the early 1-0 lead, and the score would remain the same until the top of the fourth when Cory Vaughn tripled home Rodriguez, Danny Muno doubled home Vaughn, and Blake Forsythe singled in Muno to give Binghamton a four-run advantage against Aeros starter Matt Packer. Logan Verrett cruised through six scoreless innings until encountering turbulence in the seventh in the form of a two-run home-run and subsequent walk. John Church entered the game, and while allowing the inherited runner to score, conceded no further damage leaving with a 5-3 lead. Forsythe put the stud pants on again in the eighth, tripling home Muno and Vaughn to vault the Mets ahead 7-3. Adam Kolarek pitched a solid, uneventful 8th, and Adrian Rosario pitched a nervous, eventful ninth after allowing a leadoff walk and two-run home run to cut the Mets lead in half, before retiring the next three Aeros and clinching the win.

Jacob DeGrom threw six sterling shutout innings in Jupiter, leaving with a 1-0 lead before St. Lucie broke the game open with a five-run fifth against the Hammerhead bullpen. After some slight scuffling from Marcos Camarena, Estarlin Morel and T.J. Chism worked the last two and a third inning in scoreless fashion to propel St. Lucie to the 6-1 victory.

Steven Matz is in full-season ball! And he looked good! However, the Sand Gnats converted a 3-0 fifth inning lead into 5-3 deficit heading into the sixth and never recovered, falling 6-3 to the Braves. Jeffrey Glenn gave Kevin Plawecki the day off from catching duties, and performed admirably with two singles and two walks. 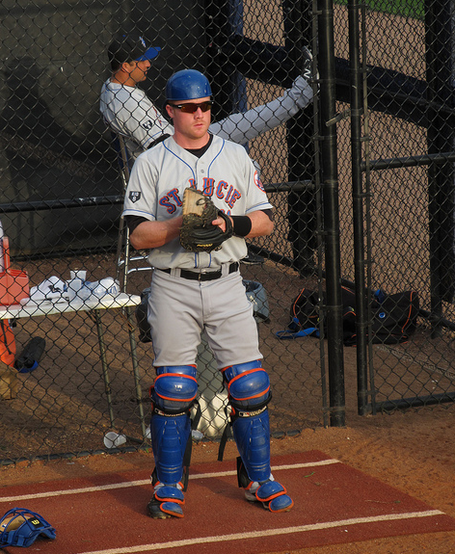 Jacob DeGrom. He was the good Jake!

Jake Kuebler. The not so-good Jake.