*All results from games played on Thursday, April 7th, 2013

For the first six innings of this game, we had ourselves a ballgame. Vegas starter Carlos Torres allowed only two runs over six innings, and his River Cat opposite, top prospect Sonny Gray, was blanking the 51's. Once both teams dipped into their respective bullpens, things got exciting. In the 7th inning, Brian Gordon relieved Gray and allowed two earned runs. In the bottom of the inning, Dylan Owen was called in and promptly melted down, giving up five runs. He was taken out after only notching two outs and replaced by Armando Rodriguez, who promptly gave up another run before getting out of the inning. In the top of the 8th, the River Cats called on veteran lefty Hideki Okajima. He gave up two runs in his inning of work. Rodriguez held Sacramento's offense in check in the bottom of the 8th, giving the 51's a chance to come storming back in the 9th. Unfortunately, it was not meant to be, as Dan Otero held Vegas in check, giving them their first loss of the season.

The B-Mets were handed their first defeat of the season, in an Akron Aeros rout. The game started well enough, with Binghamton scoring two in the third inning, but Akron could not be kept off the board. Starter Tyler Pill had things under control until the 5th inning, allowing only one run until that point. In the 6th inning, everything fell apart. With bases loaded and no outs, Jesus Aguilar singled, scoring a run and driving Pill out of the game. His replacement, Mark Cohoon, allowed all of the his inherited runners to score, making it a 5-2 game. A Wilfredo Tovar double and Darrell Ceciliani single plated a run in the top of the 7th, but it was all Binghamton could muster. In the bottom of the inning, Cahoon went back to work, allowing another three runs before being removed in favor of Adrian Rosario. Rosario, unfortunately, would not do much better, nor would his eventual replacement, Chase Huchingson. They certainly were not helped out by the 5 fielding errors that the defense behind them made.

On a beautiful day for baseball down in the sunshine state, St. Lucie increased their winning streak to four in a row as they eeked out a victory over the Jupiter Hammerheads. Starter Noah Syndergaard blanked the Hammerheads for 4 innings, striking out five in the process and walking one. The Hammerheads pitching staff was just as good, and starter Jake Esch was a hard-luck loser, allowing only an unearned run on a Matt Smith error in the second inning that allowed Aderlin Rodriguez to reach base. The next batter, Cam Maron, hit a double that knocked in the slugging third baseman, and that was all St. Lucie would get. Angel Cuan, the winning pitcher, came in relief of Syndergaard and followed up with threw 3.2 shutout innings of his own. Chasen Bradford pitched the final 1.1 innings, completing the shutout and earning the save

On an afternoon where much was said about 2011's 14th overall draft pick Jose Fernandez, 2011's 13th overall draft pick Brandon Nimmo pled his case, leading Savannah's offensive charge against the Rome Braves. The Sand Gnats plated four, but that total could have been a lot more- the team was only 5-for-16 with men in scoring position, and they left a total of 11 runners on base. With bases loaded in the first inning, 4-5-6 hitters Kevin Plawecki, Stefan Sabol, and Jeffrey Glenn failed to knock anybody in. In the third inning, 1-2-3 hitters Brandon Nimmo, Phil Evans, and Jayce Boyd loaded them up once again, and this time, the middle of the order came through. On the pitching side of things, Sand Gnat starter Rainy Lara was masterful, scattering two hits and a walk over 6 innings, striking out 6. Relievers Bret Mitchell and Hunter Carnevale kept the door closed, allowing one hit over their three innings of work and striking out a combined four batters. 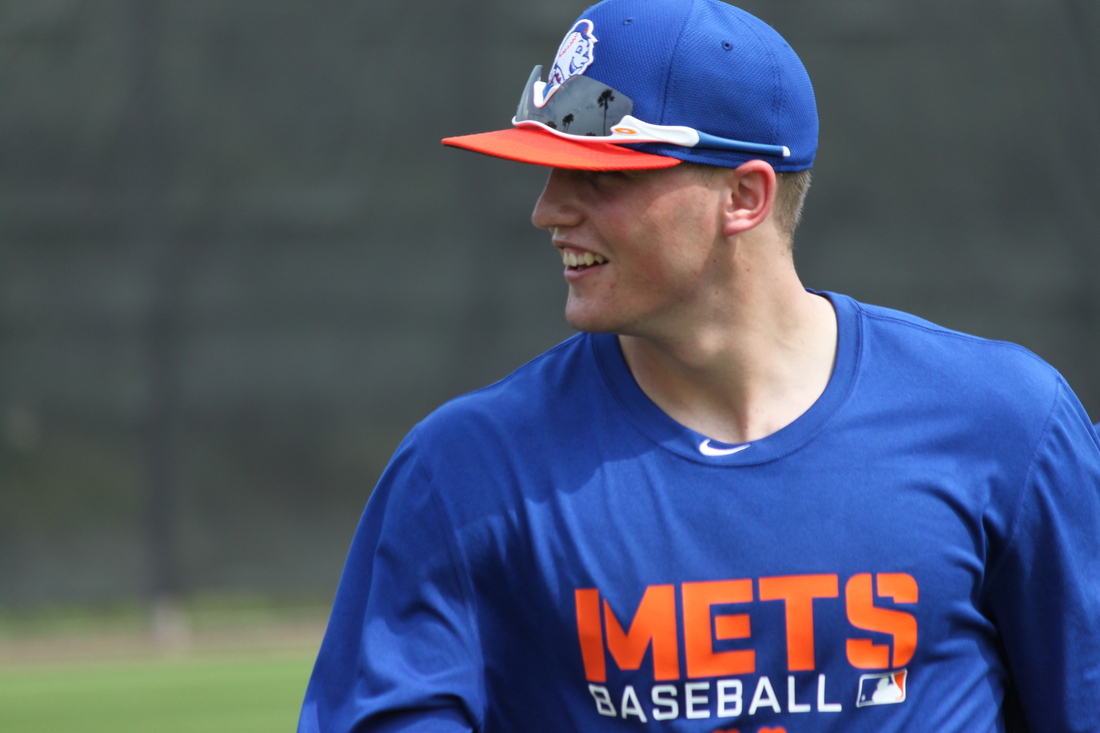 After a solid season with the Cyclones in 2012, Brandon Nimmo earned the no. 7 spot on the latest AA prospect rankings. (Photo courtesy of Chris McShane)

Brandon Nimmo gets the honors. On a day where everyone and their mother was talking about how his selection in the 2011 was a mistake, he went and showed everybody that he can play ball. Are there players who matured more quickly, or have higher ceilings? Sure, but that's baseball. Nimmo continues in his baseball maturation, and looks more and more impressive.

Vegas reliever Dylan Owen gets to wear the horns for Sunday's performance. The 51's were still in the game until he was brought in. Had he not given up 5 earned runs in 2/3 of an inning, the team might still have a perfect record. If he had been able to limit the damage somewhat, perhaps the two runs that Vegas scored in the top of the 8th would have been enough to tie the game.