Catch up on all of yesterday's minor league action from around the Mets farm system!

Much ink has been spilled of late about Zack Wheeler and the uptick in his walk rate so far this season- over 23.1 innings, he walked fifteen batters. Citing mechanical changes, Wheeler went 6.2 innings of one-run ball, striking out eight batters and, perhaps most importantly, walking only one. Of his 105 pitches, 65 were strikes. "I was lifting my leg and rotating my shoulders and when we looked at the video, we realized I was rotating too much instead of keeping my shoulders square to the plate," Wheeler said of the mechanical issues he straightened out. "It was hard to pick up the target, everything was going to the wrong side. I keep my shoulders square and it's allowed me to throw downhill and stay sharp". Wheeler's mechanical changes might have even helped him at the plate, as he knocked in a run during Vegas' three-run 2nd inning and walked in the 7th. On the offensive side of the ledger, the 51s were patient, taking nine base on balls over the game's nine innings. Chaining those walks together with timely singles and doubles resulting in a three run 7th and a four run 8th. Dylan Owen allowed a run in the 9th, but the game was so far out of reach at that point that it was hardly noticeable.

In a back-and-forth affair, the B-Mets came from behind in late innings to beat the SeaWolves. Binghamton got on the board first, scoring two runs in the 3rd inning, but when he came into the game in the top of the 6th, Jack Leathersich let things get out of hand. In his two innings of work, he allowed four earned runs (two in the 6th and two in the 7th), including a home run to left fielder Tyler Collins. In the bottom of the 6th, Blake Forsythe led off the inning with a homer, and the batters behind him chained together a few hits to plate another run, but Binghamton would remain behind. In the bottom of the 8th, Forsythe once again led the inning off with an extra base hit- a double, this time. After Cesar Puello popped up, Danny Muno singled on a line drive to the outfield, and SeaWolves right fielder Luis Castillo was unable to get the ball home in time to stop Forsythe from scoring. Jeff Walters pitched a clean 9th inning to notch his eighth save, and Binghamton increased to three games over .500.

On account of inclement weather, the game was suspended. It will likely resume as part of a day/night doubleheader, assuming the weather cooperates, in the top of the 2nd with one out. Tampa got on the board first, scoring a run off of Domingo Tapia on a walk, stolen base, and a pair of ground outs.

The Sand Gnats will be kicking off a series against the Kannapolis Intimidators. Matt Bowman will be taking the hill for Savannah, while Jefferson Olacio will be on the mound for Kannapolis. 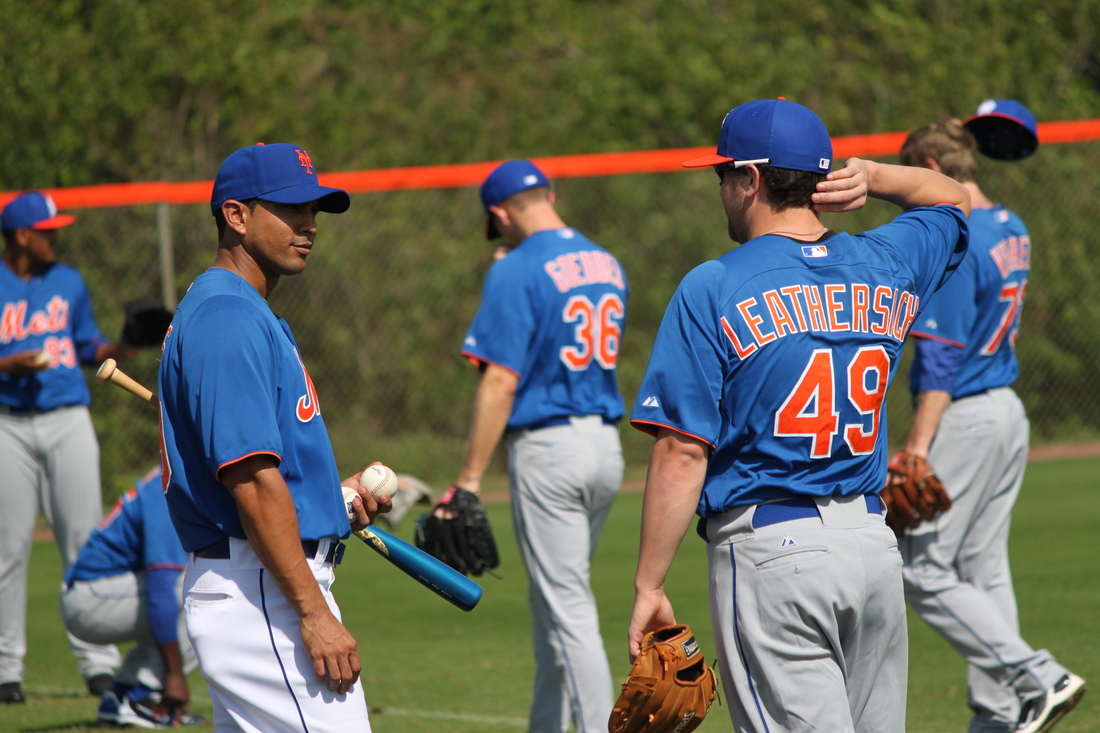 The 22-year-old Leathersich earned the no. 22 spot in the latest AA Mets Prospect Rankings.

Zack Wheeler needed a good showing for himself to quiet his detractors, and he turned in just that. In addition, he claims that he isolated and removed problematic parts of his pitching mechanics, so we might see continued improvement from here on in. Let's hope that Wheeler being the Star of the Night is a trend that continues every time he steps on the mound.

Jack Leathersich had a clunker of a game, serving up four earned runs in two innings of work. In addition, he walked a batter and hit a batter. The promising reliever did strike out three batters, so it wasn't all bad, but his blowing the Binghamton lead takes precedence over his handful of strikeouts. Had the offense not bailed him out, the loss would have been on Leathersich.