How much longer can the Mets afford to play Ike Davis?

The struggling first baseman has been an albatross around the neck of an already struggling lineup.

Share All sharing options for: How much longer can the Mets afford to play Ike Davis?

Remember those salad days of two weeks ago? Back when the Mets were riding high a couple games over .500, leading the major leagues in runs per game, John Buck was hitting about a homer a day, and the only issue with the lineup was that it was actually scoring too many runs to give Bobby Parnell a chance to do his thing. It truly was a golden age.

In fact, it was so good that it allowed us to overlook the play of one Ike Davis. Once again, Ike is off to a woefully poor start in 2013 (.165/.265/.318), contributing very little positive value to the Mets lineup. But that didn't matter; the Mets were scoring -- despite Davis -- so all was forgiven. Commentators preached patience with regard to the lumbering lefty -- he did hit 20 home runs in the second half of 2012, after all.

It's fair to say that this has been the general sentiment around Davis thus far in 2013; that he's provided decent cause for us to believe that he'll put up the power numbers we expect from him -- even if the shape of the campaign is a little more one-sided than we would like. As Ike himself stated, "I’m on pace to do in home runs what I did last year, and eventually I’ll be a better actual hitter instead of just hitting the occasional home run."

But there's a problem with that logic: Carrying Davis until the bat became effective in 2012 was far easier than it will conceivably be this season. Why? No, don't look at the lineup around him; while some of the names and faces have changed, it's still too early to confidently state that either version was or is superior.

The answer lies with Davis himself. While we all remember that Ike was awful until around the All Star Break in 2012, what many forget is that while he was being awful he was also getting extraordinarily lucky. What am I referring to? For perhaps the first time in AA history, it's all about the RBIs.

Starting to remember? Remember how odd it was that despite the fact that Davis seemingly went a week between hits throughout the first half of 2012, each one seemed to plate a runner or two? Remember how weird it was when the first half gave way to the All Star Break and he actually ranked among the league leaders in RBIs, yet had fewer hits than any qualified batter? So weird was it that at the time I actually put together an infographic emphasizing that fact (click image to embiggen): 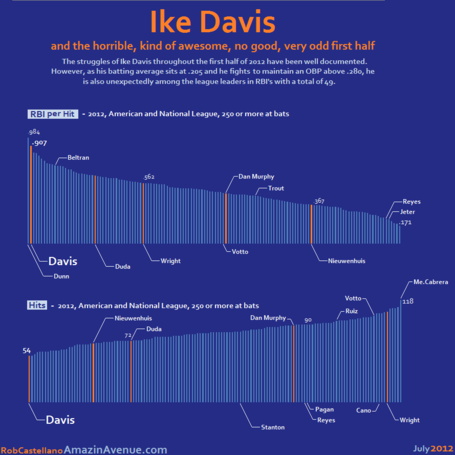 One half of that diagram remains true this season: Ike currently ranks 216th in the majors in hits. Except this time around, instead of a .907 RBI per hit rate, he's currently driving in .571 runs per hit. (For those who prefer the glass half full, Ike had the same amount of RBIs through 24 games last season as he does now; but I wouldn't hold your breath waiting for lightning to strike twice.)

Now I am not advocating for any drastic decisions to be made about Davis in the immediate future. In fact, just over a week ago I professed that we shouldn't lose faith in Ike over his propensity for slow starts. I will, however, point out that even with the RBI Fairy on his side, Davis narrowly escaped a trip to Buffalo in 2012. By early June the grape vine was abuzz with a potential demotion, even as his RBI count soared. So the question is, what happens if -- in addition to not hitting -- Davis is also not driving in runs?