Las Vegas rallied to score two runs in the bottom of the 8th as the 51's got back to .500 with a 6-5 win at Cashman Field last night. Josh Satin had the big hit, driving in Colin Cowgill who had just doubled in Kirk Nieuwenhuis to tie the game. Chris Schwinden and his mustache cruised through the first six innings despite not recording a strikeout. A little luck and a couple of fine defensive plays by Reese Haven, Eric Campbell, and Omar Quintanilla certainly helped. However, it all caught up with him in the seventh when the balls started to drop. Two doubles and a single chased him from the game in favor of Gonzalez Germen, who promptly loaded up the bases via two walks and then kindly unloaded them by surrendering a triple. The 51's had jumped out to a lead early, thanks in part to home runs from Zach Lutz and Wilmer Flores.

Paul Demny and Ian Krol combined to no-hit the B-Mets last night in Trenton. According to Adam Rubin, it was the first time Binghamton had been no-hit in 12 years. If you're curious how they managed a run, it came when Allan Dykstra drew a walk and then advanced to third on a throwing error after Cesar Puello hit a tapper back to the pitcher. He then scored when Francisco Pena grounded into a double play. Speaking of Puello, his 15 game hit streak came to an end, obviously. Jacob deGrom continued to struggle in AA, giving up four earned over 5.2 innings.

The St. Lucie Mets used 16 hits and nine walks to destroy Daytona last night by a score of 17-1. Despite the offensive outburst, the stat line that will excite Mets fans most came from our favorite viking look-alike, Noah Syndergaard. The towering right hander -- acquired in the RA Dickey trade -- gave up one run over seven innings, striking out seven and walking just one. Since his poor outing on April 18th, Syndergaard has thrown 26 innings, given up two earned, walked six, and struck out 23. There were far too many great offensive performances to comment on; just look at the stacked lines below:

Steven Matz gave up just one run across six innings as the Sand Gnats beat the Rome Braves, 3-1. Matz cruised through this start, the lone blemish coming on a solo home run in the second inning. He did run into a bit of trouble in the fifth and six but was able to induce inning-ending double plays to get out of both jams. The Gnats scored all of their runs in the sixth and they were mostly handed to them, scoring one on a wild pitch and another on an error. Kevin Plawecki did not double in this game -- he merely had a single and a walk in four plate appearances. Jayce Boyd has cooled off quite a bit -- he's slugged just .294 over his last ten games.

ROSTER UPDATE: Brandon Nimmo was finally placed on the DL due to the hand contusion that has kept him out of action since April 29th. The injury has been described as "nothing major." Maikis De La Cruz was brought up to replace Nimmo on the roster. 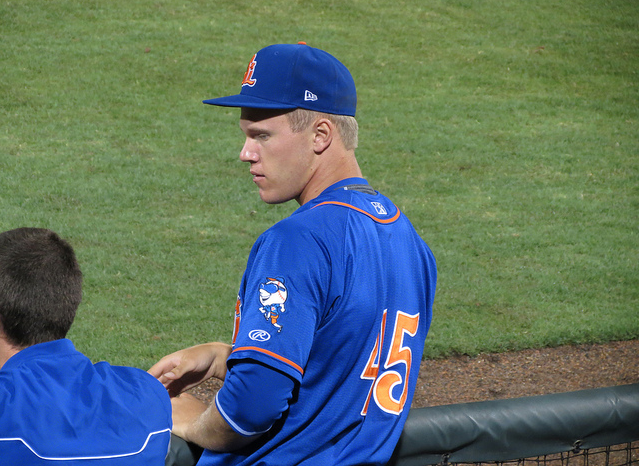 Noah Syndergaard needs a nickname. I've seen Thor tossed around. Not sure I can get behind that. The problem with nicknames these days is that they feel so forced. Nicknames need to happen spontaneously. Regardless of what we call him, he gets the star tonight for his seven inning, seven strikeout performance.

I typically like to give this to one man, but there is just no way I cannot put the horns on the entire Binghamton lineup. It's embarrassing to get no-hit no matter when it happens, but when it's done by a pitcher who came into the game with a 5.90 ERA, they should literally put horns on your helmet the next game.