Shaun Marcum carved for himself a not-so-special piece of Mets history in a rather ugly Mets loss.

The Mets haven't been very good at the scoring of the runs lately, and tonight was no exception. Wandy Rodriguez shut the Mets down for six innings, allowing just one run and six hits while striking out a pair. Meanwhile, Shaun Marcum struggled to get through the fifth inning despite the fact that he retired the side in order three separate times. The two times that Marcum didn't get the Bucs out in order turned into disastrous innings for the Mets.

Things fell apart quickly in the second inning, as the first five Pirates to come to the plate reached base.

Garrett Jones led off by lobbing a double into left-center field that Juan Lagares dived for and missed. Jose Tabata followed with a single to left field and Pedro Alvarez drove in the first run of the game with a line drive to right field. The Mets were at least able to get the first out of the inning when Marlon Byrd did his best Jeff Francoeur impression and hit a rally-killing home run threw out Tabata as he was trying to go from first to third.

The great defensive play only briefly quelled the Bucs' momentum. Michael McKenry doubled to put runners back in scoring position and Marcum plunked John McDonald to load the bases. Wandy Rodriguez came up with a chance to help his own cause, and he managed to make the score 2-0 when he hit a line drive off of Marcum's glove hand. The Mets got a force out at second base, the Pirates got a run across, and Marcum was deemed healthy enough to continue pitching.

Marcum appeared to get out of the miserable inning during the next at-bat when Starling Marte bounced a ground ball to shortstop. However, Ruben Tejada had trouble getting the ball out of his glove, and Marte was safe at first with an RBI single.

The Mets had a chance to break through against Rodriguez in the fourth inning, but the three batters after David Wright couldn't manage to get him around after the captain led off with a double to left field.

Trouble struck again for the Metsies in the fifth inning. Marcum got things started for the Bucs by hitting the leadoff hitter Marte with a pitch. Jordy Mercer followed with his second single of the game, and two batters later Jones drilled a ball just over the wall in right field that was initially ruled a double.

The umpires reviewed the play and correctly concluded that Jones had hit a three-run home run to make the score 6-0. Marcum was relieved in favor of Robert Carson just two batters later, which made him (Marcum) the first Mets pitcher ever to fail to reach five innings pitched in each of his first three starts with the team. Marcum ended the night with six runs and nine hits allowed in 4.2 innings. His only two strikeouts were from the first two batters in the game.

Anthony Recker got the Mets on the board in the sixth when he led off the frame by blasting a Rodriguez fastball into the left field corner seats. It was Recker's first home run as a Met and the second of his career. Juan Lagares followed that up with a double to nearly the same location, but the Mets once again failed to score a runner from second with nobody out.

Carson and Scott Atchison kept things from getting completely out of hand, but Scott Rice allowed a run in the ninth that turned out to be mildly important. That's because Jose Contreras, whom Bucs manager Clint Hurdle entrusted to mop up in the bottom of the ninth inning, nearly let the Mets back into the game. Jordany Valdespin hit a homer off of Contreras with one out, and both Ike Davis and Recker reached base to provide a spark. Lagares lined into a tough out, but Andrew Brown hit a single that scored the Mets' third run and put the tying run in the on deck circle.

Unfortunately for New York, Contreras was finally pulled from the game in time for Jason Grilli to come on and retire Ruben Tejada for a one-out save.

The Mets play against the Pirates again tomorrow afternoon at 1:10 PM. Jon Niese will start for New York against Francisco Liriano, who will be making his Pirates debut. 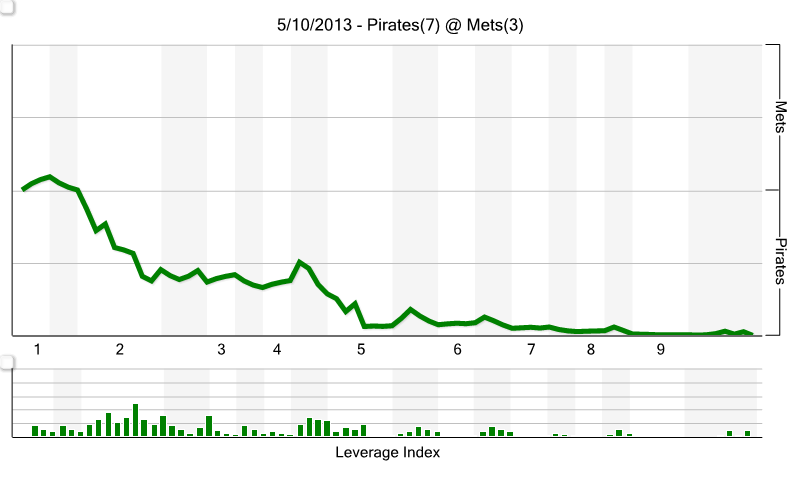