Matt Harvey wasn't dominant against the Pirates, but he was still pretty good.

Pitching against the Pittsburgh Pirates yesterday at Citi Field, Matt Harvey wasn't at his best, particularly early in the game. He struggled in the third inning, allowing two runs to score, but wound up pitching seven innings without allowing any more. He struck out four, walked two, and gave fives hits, one of which was a Clint Barmes home run.

In his young career, 12 percent of Harvey's pitches have been changeups. Yesterday, he only used the pitch seven times, which was only 6.6 percent of the 105 pitches he threw. Even without his best stuff, Harvey generated twelve swinging strikes in the start, good for an 11.4 percent rate. The major league average swinging strike rate is 9.2 percent.

And here's the plot of Harvey's pitches from the game: 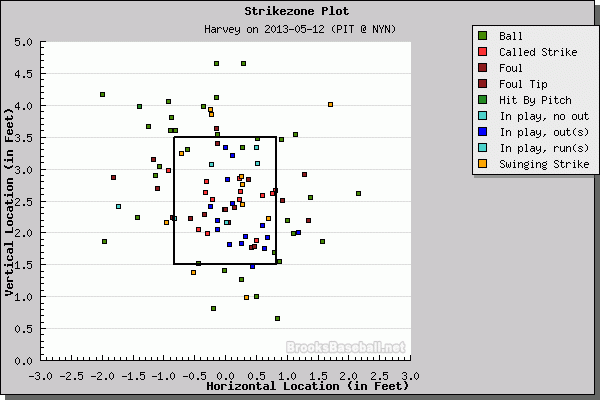 Harvey's strength is pitching in the upper half of the strike zone, which he didn't do as effectively yesterday as he did in his previous start. And when he missed the strike zone, he missed it by a wide margin, resulting in balls instead of whiffs. Harvey's is clearly capable of generating swinging strikes in the zone, but he does even better when he gets those whiffs on pitches just a bit outside of it.

Harvey and Adam Wainwright are jockeying for position at the league's top starting pitcher. They're slightly trailed by an excellent group of pitchers: perennial aces Jordan Zimmermann, Cliff Lee, Clayton Kershaw, and Madison Bumgarner and the suddenly-good-again A.J. Burnett.

Through eight starts, Harvey's season still fits right in with some of the best in Mets history.

With the slight rise in his ERA, Harvey is just behind Tom Seaver at this stage of the season, but his strikeout number is still the best despite having pitched the second-fewest innings. His walks, too, are the fewest, though there's some advantage to having thrown fewer innings there. And his average game score of 74 is equal to Seaver's, which is no easy feat.