Matt Harvey is on the cover of this week's Sports Illustrated

It's only a regional cover, but still, pretty cool stuff.

Share All sharing options for: Matt Harvey is on the cover of this week's Sports Illustrated

Besides Lucas Duda's on-base percentage (aaaaaand it's gone), Matt Harvey has been the lone bright spot for the Mets this season. This week, he will be rewarded for his superb pitching with the fame and glamour that comes with being featured on the Sports Illustrated cover. 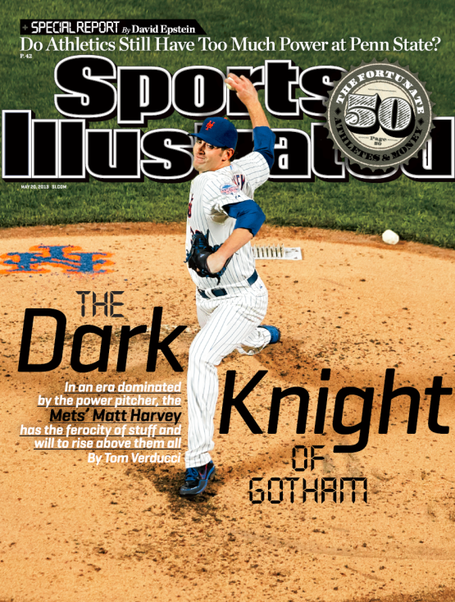 It's a good thing that Harvey pitches in the big city, because Shelby Miller has his rookie eligibility intact and has better strikeout and walk rates! We're bored of the Cardinals coming up with talented prospects, though. For the Mets, this is fun and exciting.

As for the "Dark Knight" label, it certainly fits Harvey's personality well. He even dressed up as Batman for Halloween when he was a kid.

I guess there was a reason why I was batman for probably 6 years in a row as kid for Halloween! Haha very thankful and honored!

Here's hoping for even more success in the future for the Mets' beloved ace.