Share All sharing options for: Mets prospect Zack Wheeler to miss next start with injured clavicle

It has been a rough week for the Mets and the hits keep on coming.

Prized prospect Zack Wheeler will miss his next start in Triple-A Las Vegas due to soreness in his right clavicle. The right-hander reported soreness in the area to a trainer on Monday, and he will be examined in New York.

For what it's worth, the Mets are downplaying the injury. Mets assistant general manager John Ricco said the team is being "conservative" regarding the injury. Manager Terry Collins said he only expects Wheeler to miss one start.

As for the injury itself, the clavicle is a fancy term for the collarbone. It is located right near the shoulder: 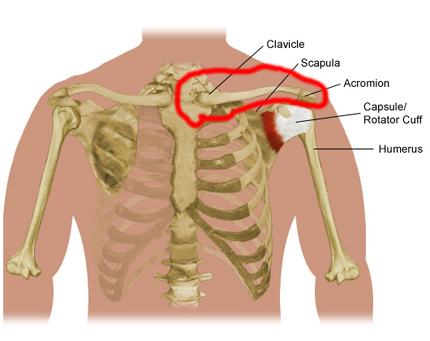 It's unknown exactly how Wheeler injured his clavicle. It could be something relatively minor or it could be a sign of trouble with his shoulder, which would be a major problem for a pitching prospect. Ominously, Wheeler said he's never dealt with this kind of issue before.

Wheeler has made eight starts for Las Vegas this season, posting a 3.74 earned run average while recording 47 strikeouts and 18 walks in 43 innings. He was expected to make his MLB debut sometime in June.