The Mets managed to score four runs against the Cardinals, but they were down by nine at the time.

The Mets’ stretch of terrible baseball continued in St. Louis as the Cardinals defeated them 10-4. Aside from Matt Havey, the Mets’ rotation has been awful of late, pitching poorly and departing games early. The trend unfortunately didn't come to an end tonight as Dillon Gee surrendered six runs in four innings, putting the Mets in a hole and further taxing an already overworked bullpen. 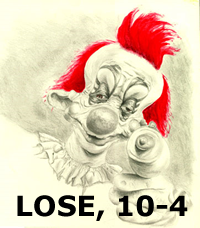 After the Mets failed to score in the top of the first, Gee immediately got into trouble in the bottom of the inning by walking leadoff man Matt Carpenter. Gee then got a ground ball to first base from Carlos Beltran—which should have been a double play, but was turned into a throwing error by Ike Davis. With runners on the corners, Matt Holliday doubled to score the first run of the game. Allen Craig singled to plate Beltran and Holliday, and the Mets were down three.

The Mets didn’t accomplish much at the plate until the sixth inning. The Cardinals, on the other hand, put together more productive innings before then. They plated three in the third inning on a trio of RBI singles by Pete Kozma, Matt Carpenter, and Carlos Beltran. And after Robert Carson came in to relieve Gee in the beginning of the fifth inning, they scored three more when Beltran hit a seemingly effortless three-run home run into the third deck in left field.

Down 9-0, the Mets made some noise in the sixth against Cardinals starter John Gast, who was making his big league debut. A one-out single by Daniel Murphy and walk by David Wright got the mini rally started. Murphy scored on a John Buck single, and Wright scored a Lucas Duda groundout to first. Buck was caught in a rundown on the play, and although Wright would have scored regardless of the outcome, the Cardinals should have ended the inning there. Buck, who recently stole second base in a real big league baseball game, managed to get there safely as the Cardinals struggled to cover the bag. And with the inning still alive, Marlon Byrd hit a home run to cut the Mets’ run deficit to five.

Jon Jay hit a home run against Robert Carson in the bottom of the inning to put the Cardinals in front by six, and both bullpens kept the score intact through the end of the game. Perhaps the only benefit to getting blown out on the road is that the Mets only had to use three relief pitchers, with Brandon Lyon and Greg Burke following Carson with an inning of work each. 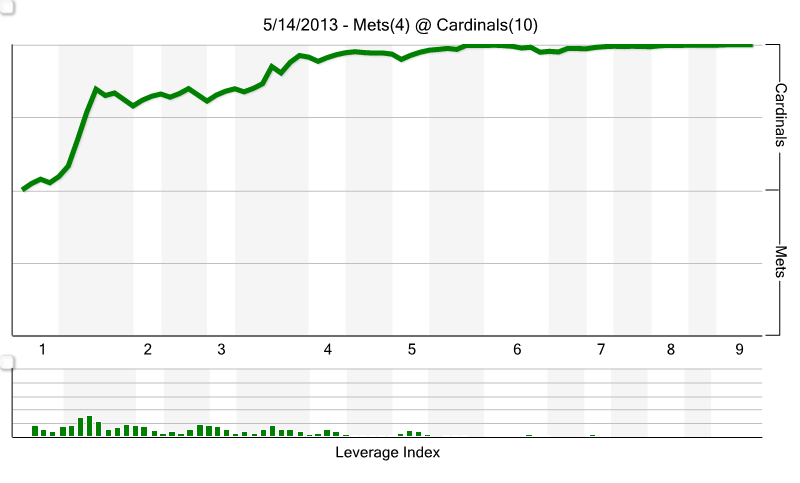