Mets Daily Farm Report - 5/16/13: Not The Matzterpiece I Was Hoping For

Share All sharing options for: Mets Daily Farm Report - 5/16/13: Not The Matzterpiece I Was Hoping For

For the second straight night, the B-Mets beat the Akron Aeros in convincing fashion. Starter Jacob deGrom didn't have his best stuff, allowing four runs, but I think he pitched better than his line score shows. He allowed four earned runs, but three of the four came in the 3rd inning, when the Aeros chained together a pair of singles and a pair of doubles. They scored another run in the 7th, also off of deGrom, but by that point, Binghamton had the game well in hand. In the 5th inning, the B-Mets scored six runs. With the bases loaded, Cesar Puello singled to right and scored two runs. After Allan Dykstra walked, Cory Vaughn deposited a ball over the left field wall, making his fifth home run of the season a grand slam. In the 6th inning, the B-Mets scored another three, with Puello doing the heavy lifting this time, driving two in on a double to left. Adam Kolarek and John Church pitched the final two innings, and encountered no problems.

St. Lucie and Brevard County went blow-to-blow in a back-and-forth, topsy-turvy game that saw the Manatees narrowly edge out St. Lucie by a run. It wasn't that Brevard County's offense was spectacular (it generally isn't), or that St. Lucie starter Alex Panteliodis didn't pitch well (generally speaking, he did), but rather, that the St. Lucie defense had gaffe after gaffe. In total, they committed five errors- both middle infielders had an error, Travis Taijeron misplayed a ball in right, and Cam Maron made a fielding error and was called for catcher interference. The two unearned runs that their defensive miscues resulted in were important- after falling behind, St. Lucie scratched out a run in the 6th inning and the 9th inning. If those two unearned runs did not score, the final score would have been St. Lucie 3 and Brevard County 2, and the Mets would have one more victory in their win column.

Just my luck. Since the minor league season began, I've been waiting and waiting to recap a game that Steven Matz, one of my favorite Mets prospects, started. When I finally do, he has his first clunker of the season. Mr. Matz lost his second ballgame of the season, allowing four earned runs in 4.1 innings. While he did strike out five, keeping his K/9 above nine, and his ERA remains a very nice 2.83, he also walked three and committed an error. His troubles began at the very start of the game, allowing a single, letting a batter get on base making a throwing error, and allowing a three-run home run in the 1st. Matz allowed another run in the 3rd, and in the 5th, after he walked a batter, Julian Hilario allowed that inherited runner to score, further blemishing the Stony Brook native's night. The Sand Gnat offense had problems of their own, and couldn't get anything cooking against RiverDogs pitchers. In the first eight innings, Savannah only scored once, in the 4th inning, and that came on a wild pitch. They finally got some momentum in the top of the 9th, with Eudy Pina hitting a line drive to center that scored two runners. Charleston reliever Derek Varnadore was able to get his affairs in order and finished off the Sand Gnats despite that late offensive outburst, squashing any dreams of a dramatic comeback. 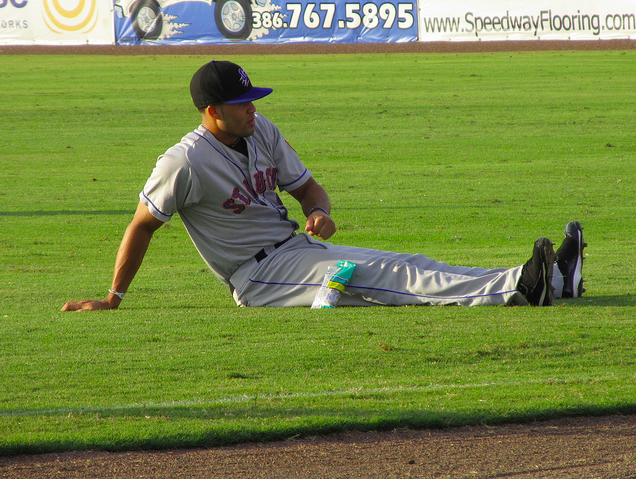 Binghamton had a few stand-out offensive performances yesterday, but they don't get much bigger than Cory Vaughn and his grand slam. That was his only hit in five at-bats, but he made it count: we all dig the long ball.

Fine, Steven Matz was last night's goat. But, this is never going to happen again. Ever.